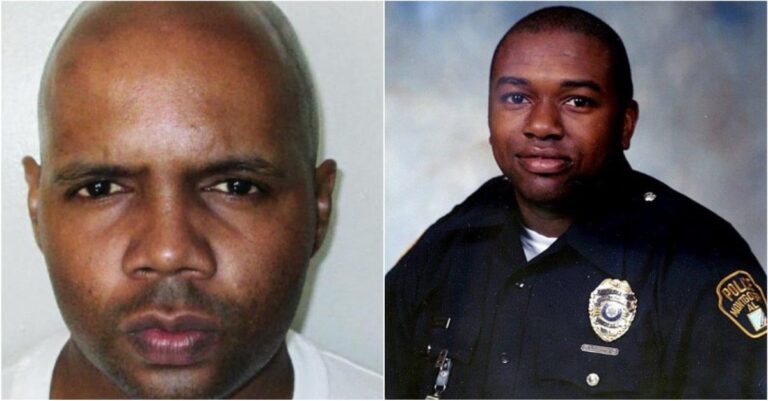 In 1997, Torrey Twane McNabb killed Anderson Gordon, a police officer, by shooting him five times. The shooting followed a crash scene caused by McNabb as he fled a bail bondsman. In his last moments, before McNabb was put to his death, he delivered a chilling hate-fueled speech in front of a stunned audience.

When asked for his final words, he turned to face his family and said, “Mom, sis, look at my eyes. I have no tears. In my eyes, I’m not afraid.”

However, there I more than just that. According to Al.com, a reporter who was present at the execution stated that McNabb added, “I hate you motherfuckers. I hate you. I hate you,” while addressing the State of Alabama. He had both his middle fingers raised up before he lost consciousness.

The 40-year old was executed close to 9PM in Atmore, Alabama, at Holman Correctional Facility. He was declared dead within the hour.

The following statement was released by Officer Gordon’s family:

“Over 20 years ago, we lost a companion, a father, a brother and a friend who only wanted to make a difference in his community. Although the wounds of having a family member murdered can never be healed, through this tragedy, the Gordon family has remained strong and will continue to be resilient.

“Though this has been a difficult day for the Gordon family, we also continue to pray for the family of Torrey McNabb.”

McNabb’s lawyer was in the process of filing a lawsuit attacking the State’s death penalty and hence had sought to stop proceedings. His lawyer alongside other inmates had jointly challenged the State’s use of midazolam, a drug used in the euthanizing process. They argued that it usage stood in violation of the country’s Eighth Amendment – a segment of which prohibits the imposition of unusual and crual behavior from the federal government.

This began as a result of a death row inmate in the State of Georgia who insulted the witnesses in his use of his final words. JW Ledford Jr quoted the movie “Cool Hand Luke” in his final words.

“What we have here is a failure to communicate,” he said. This was a phrase spoken in the 1967 prison drama by the warden. “Some men you just can’t reach.”

The prisoner also added with a smile, “You can kiss my white trash ass.”