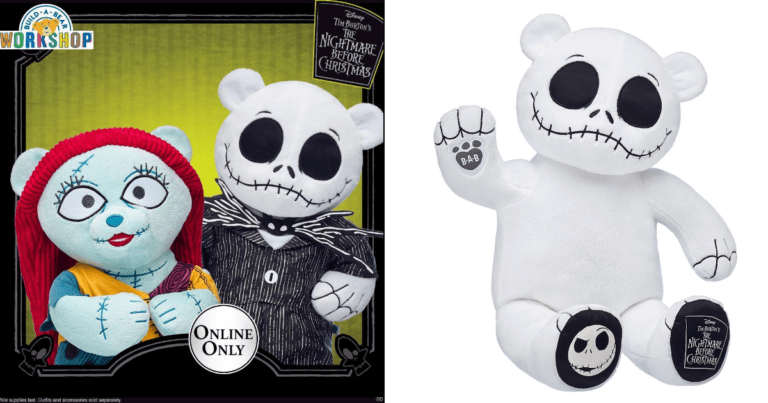 Build-A-Bear has continued to be the perfect gift for adults and children of all ages, as it has an enormous collection of cuddly creations ranging from anime, video games, and even horror, but are any more hauntingly beautiful than these (not-so) new additions?

Announced before Halloween last year, a range of bears featuring two of The Nightmare Before Christmas’s most iconic personalities, Jack Skellington and Sally, were available to purchase for you soft-hearted horror fanatics.

The bear displays Jack Skellington’s signature stitched-on grin and round black eyes. Both bears come complete with outfits and song clips and will cost you around $55 if you wish to buy the Jack bear.

If you are interested in collecting your very own lovable The Nightmare Before Christmas Jack Skellington or Sally, you can do so HERE!

The hit Disney Halloween/Christmas movie was first released to American audiences back in 1993 and follows Jack Skellington as he attempts to bring Christmas back home, causing controversy among the residents of Halloween Town.

Chris Sarandon (as Jack Skellington), Catherine O’Hara (as Sally), William Hickey (as the Evil Scientist), Glenn Shadix (as the Mayor), Paul Reubens (as Lock), Ken Page (as Oogie Boogie), Edward Ivory (as Santa), Susan McBride (as the Big Witch), and more all featured in the animated horror classic.

Henry Selick, the Oscar nominee, has earned an Annie Award for his work on The Nightmare Before Christmas.

If you are a big ‘The Nightmare Before Christmas’ fan, you HAVE to check out this adorable but creepy Zero the dog lamp which looks incredible when lit up. You can find it HERE!