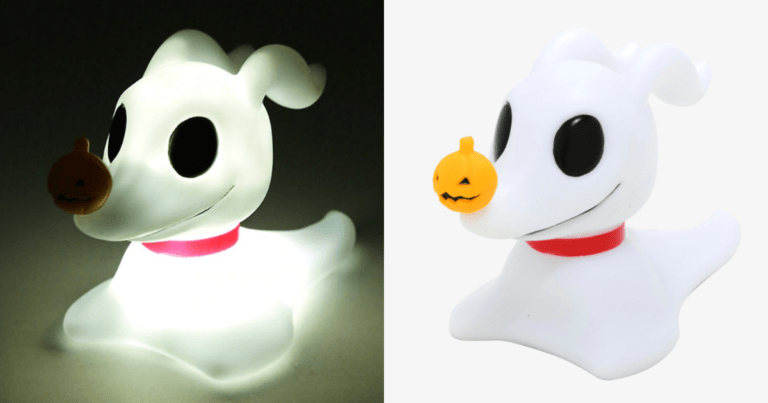 Alongside Christmas, Halloween is the most famous time of year and easily the most enjoyable.

Its a time for personal expression and some people count down the days until the holiday arrives, while for others, Halloween is active all year round.

You can never be too stocked up on cool, creepy decorations and this Zero lamp is a must-have for any Halloween, horror, or The Nightmare Before Christmas fans.

Zero is Jack Skellington’s ghost-dog in The Nightmare Before Christmas. On Christmas Eve, Zero successfully helps guide Jack through the fog and resides in his doghouse gravestone.

Zero seems to follow Jack with whatever emotion he’s feeling. If Jack is happy or upset, Zero follows suit and either smiles or frowns depending on his masters’ behavior.

Just like all loving dogs, Zero is loyal to Jack and waits for him to return from Christmas Town.

If you are a fan of this pumpkin-nosed dog, you can order the lamp from Box Lunch, which is sold accompanied by a pair of batteries, for just $22.90.

Although the Zero lamp looks outstanding while switched on, it also looks pretty special without its light turned on too.

The nightlight is a compact six inches tall, meaning you can fit Zero almost anywhere in your home for the perfect mix between cute and spooky.

The Nightmare Before Christmas was released back in November 1994 and has since established itself as one of the best Halloween and Christmas movies of all time.

The classic film followed the king of Halloween Town, Jack Skellington, as he attempts to bring Christmas to his spooky home, causing confusion among the locals.