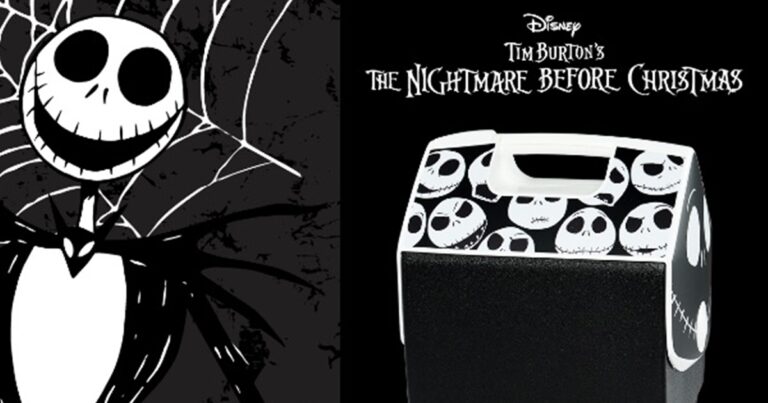 With how popular Tim Burton’s films have been in the past few decades, it’s no surprise that there’s been a large number of items adorned with his character’s faces. During this time, the most popular has undoubtedly been Jack Skellington from The Nightmare Before Christmas. From everything from mugs to rugs, there’s almost nothing that hasn’t had his iconic face on it.

This 9-can cooler is no different and could make for a perfect accessory when you’re going on a picnic with family, or even camping. The limited-edition cooler, developed by Igloo and available on Zola.com, is priced at $39.99, so you wouldn’t have to spend too much money on buying the family-friendly cooler.

Developed in the U.S.A and made from polypropylene plastic, the cooler shouldn’t need much effort to clean and doesn’t weigh a lot by itself. As such, it should be one of the more versatile coolers on the market, not to mention one of the more well-designed. Featuring a range of Jack Skellington’s faces, it should also be a great present for any Nightmare Before Christmas fans.

Igloo, who released the product, has quite an extensive history of releasing coolers and other products, so there shouldn’t be any issues with quality. Based on the photos, it looks like it’s one of the better products to be based on Tim Burton’s films in quite a while.

There’s also the fact that, because of the style itself, the cooler could be used year-round, as it would be perfect for those summer days, alongside being appropriate for any Halloween-focused celebrations.

If you or your family are fans of A Nightmare Before Christmas, then this is undoubtedly one of the more interesting products on offer. However, it’s also worth noting that shipping could take some time, depending on where it’s being shipped to. The wait should be worth it, though.

If you’re fan of Nightmare Before Christmas you should check out these games too! Click here