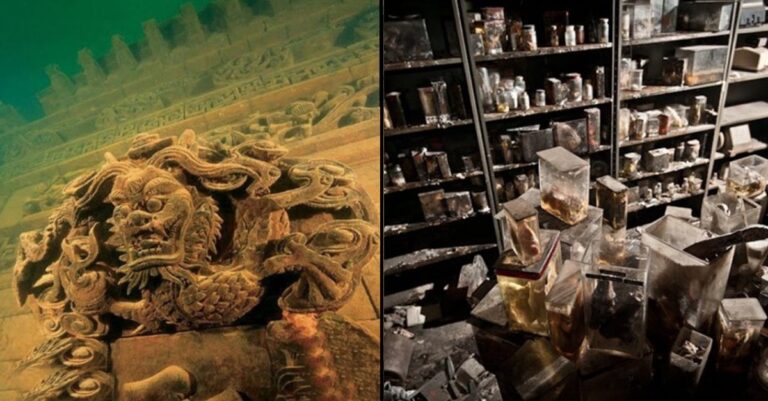 There are far more abandoned places in the world than your darkest nightmares can muster. Stark reminders of what once was, they leave behind haunting tales of spirits, curses, and ruin. Ranging from eerie to majestic to downright terrifying, these 15 creepy abandoned cities around the world will chill you to the bones.

Why are Whole Cities Abandoned?

When it comes to abandoned buildings, it is plausible because every building could become dysfunctional at one point. But when whole cities become abandoned and left for dead, it startles one’s mind. It must be quite a ghastly incident that led to a whole city being abandoned. And the callous past that haunts it makes it a creepy abandoned city.

Who would’ve thought an amusement could ever be abandoned? What once was fabled to become Beijing’s Disneyland soon fell into ruins. Disputes over land prices brought construction to a halt. The lonely space houses half built amusement rides and castles set for decay. Local farmers have even ceased part of the land for illegal farming.

The ghost island marks a high spot on lists for creepy abandoned cities around the world. Hishama Island (also sometimes called Battleship Island) was home to a coal mining facility back in the late 19th century till the mid 20th century. However, its glory days were soon over and now it is home to schools, restaurants, homes and hospitals in ruin. Many James Bond fans would recognize it as the lair of Skyfall’s villain.

The Casa Grande ruins survive in battered shape on the outskirts of the desert town. Dwellings of Anasazis, these peculiarly shaped dome-like monuments date back centuries. Many have likened their appearance to UFOs. A place with no real past and no determined future, it reeks of despair and gloom. Feel free to add it to your bucketlist of creepy abandoned cities around the world to visit before you die.

Yet another abandoned theme park, this 18 acre park was once a hub for visitors and children. In the 70’s around 40,000 people came each year. When shut down for renovation in 1984, the owner mysteriously died. The incident left everyone unsure of what to do with the place. Rapidly falling to ruin, multiple freak accidents emerged soon after. On those very grounds a murder also took place.

The infamous and gruesome Oradour-sur-Glane massacre gave rise to this haunted city. The Nazi Waffen SS company wiped out the village, women and children included in 1944. Never rebuilt, the old city was left in ruins. French President Charles DeGaulle made sure the decaying city stayed as a reminder of the gruesome past. In recent years a plague set through the town leaving it more morbid than ever.

The historical city of Bhangarh is legitimately one of the most creepy abandoned cities around the world. Although transformed into a tourist attraction, there is an interesting fact about the place. No pictured at night exist of the place. At night, paranormal activity reigns in the old city. Legend has it that a heartbroken magician cursed the city after the princess rejected him.  Doomed to death are those who set foot in the city. Rebirth? That is forbidden upon them too.

The suburbs of Lehigh Acres hold a story that dates back decades. Once a populated town, the real estate inflation that followed the 90’s rapidly threw it into decline. From the many blocks in the town, barely any are inhabited. The remaining abandoned plots soon became haunted. Wayward spirits and ghosts sought refuge in them hence labeling the place a ghost town. What would cause you to set foot in there?

The deserted and crumbling walls are the least terrifying in this complex. Deserted since the 90’s, fear of what dwelt within resulted in it never being rebuilt. Assorted animal parts still remain stored in jars and vials inside. Appropriately titled, “Horror Labs” what ensued in the complex remains a mystery. From sewn body parts to animal skulls, the place will leave you sick and rather horrified.

While most of the creepy abandoned cities around the world lie on the surface of the Earth, this horrifying one lies underwater. China’s Atlantis, the city is preserved underneath the Qiandao Lake. Although it once resided on ground level, the need for a hydroelectric plant caused the flood which submerged it. Now lying perfectly preserved underwater, it has become a creepy destination for daring divers.

The fable that surrounds this creepy island started with a man named Don Julian Santana Barrera. On one creepy instance, the body of a young girl washed ashore the island. The next day a doll washed ashore. Soon after, a doll drifted past every day. The dead girls spirit was believed to dwell within the dolls. Barrera stayed and collected the hundreds of dolls that kept washing ashore. Now the island is a barren wasteland of rotting dolls. If you are wondering what happened to Barrera, he was found dead in the very same waters. A chilling tale, it leaves many rather disconcerted.

When the diamond hunters of Germany rampaged this village, they settled soon after. However, when the diamond rush ended the Europeans left. As a result, the town was left derelict and abandoned. The desert then took to making the town its own. Sand filled the abandoned homes consequently burying the city. What lives on in the empty homes now is a mystery.

The 1970s saw the creation of pod houses in this district. The dream was to create a futuristic town. Eco conscious and forward thinking was the vision for this town. However, the financing company soon ran out of budget. As a result, the district was abandoned. Rumor has it that the city was built on a graveyard and hence was eternally cursed. Multiple accidents emerged resulting in workers’ gruesome deaths. Despite being razed to the ground in 2010, the horrifying history of the place lingers on.

Located in the Chernobyl zone, Pripyat was privy to the worst nuclear disaster in history. In 1986, a freak accident destroyed a nuclear reactor. Within 36 hours, 49,000 residents evacuated. The high radiation in the region makes it inhabitable. Even today, no one dares set foot there. Nature has reclaimed the town for itself making it a notable spot among creepy abandoned cities around the world.

Distant, abandoned and haunted, the Garnet Ghost town is famous for its creepy stories. Around 1000 people dwelt there at its peak during the gold rush times. When the gold rush finished, everyone left. Consequently the place fell into ruins. Shortly after, a huge fire almost destroyed the whole town. It is one of the most visited creepy abandoned cities around the world.

What used to be a mining town was soon reduced to ash and dust. After a fire broke out in 1962, the residents evacuated. Rumor has it that it shall continue burning for 250 more years. As a result, the town’s zip code was revoked. Reduced to a blip on the map, its atmosphere parallels Saturn in toxicity. This is a world where no human can dwell. Only the supernatural!

It is indeed shocking to realize that humans fail to maintain the composure of the earth after using it so discourteously. Humans are, undoubtedly, the most ungrateful of the creations. These cities/part of the cities were left abandoned in the ugliest of shapes and nature transformed them into more creepy places so they become too frail and vile to be inhabited by any living thing. Hence were declared as explicitly creepy abandoned cities.

They only purpose such cities serve are research for scientists. For ghost hunters and paranormal investigators, these places are perfect as they are home to thousands of spirits and evil entities. Such places are, in fact, gateways to demonic entities since they carry so much negative energy within them. Plan a visit to one of these places and spend a few nights. It’s hopeful that you will interact and become a nice company to the undead. What’s the worst that could happen, right?