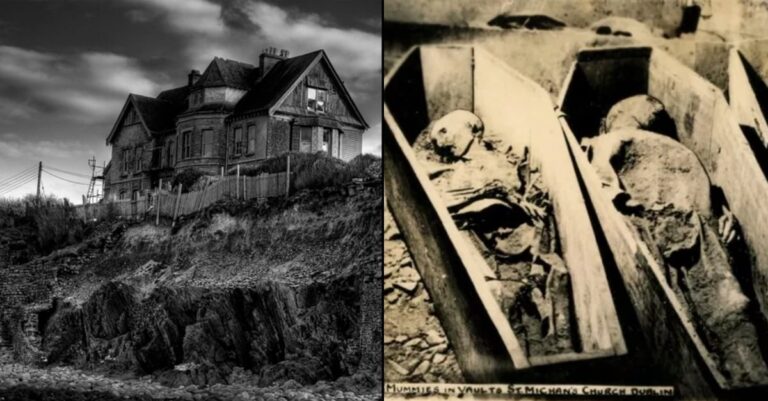 One of the most haunted place in all of Europe, Ireland is notorious for its horrifying creepy tales. The rich history of the place is riddled with numerous ghost stories, folklore and ancient mythology. Its long and brutal history spans centuries, shedding light on unbelievable horror.

Some of the most haunted places in Ireland absolutely need a visit in real life. Supposing you are not afforded that luxury (or simply are terrified) then join us. Open to all visitors, some of these locations are too unreal to believe. If you are lucky enough, you might just seek to dwell into the abyss and check for yourself.

Built in 1095 in Dublin, the St. Michan’s Church is a historic building that has literally stood the test of time. It is well known for being one of the most haunted place sin Ireland. Below the church, the catacombs store mummified remains of the former congregation. Preserved down below are church leaders, nuns and political figures. Creepily enough they can also be viewed by public visitors. The place is pretty warm but stories of a cold hand snaking its way down visitors’ necks have been reported. Others state that they heard whispers and felt a presence. These tales have left many wondering whether there is far more than just mummified remains in those catacombs.

One of the more haunted places in Ireland, Charleville Castle has been visited multiple times by investigators of the paranormal and television shows. It was built by the first Earl of Charleville William Bury, in 1798. Until the 1960’s the castle remained in the family’s ownership. It was then purchased by Bridget Vance. The neglected property saw renovations but then the workers reported haunting stories. Claims arose that the renovations in the castle had awoken the spirits.

Out of the many spirits dwelling in Charleville, that of a child named Harriet is the most active. She passed away on the main stairwell. Reports have it that her ghost is regularly seen ascending and descending the stairs. Further experiences include people hearing sounds of her laughter when no is around and other experience a brush of cold air as they use the stairwell.

William Phibbs built the Seafield House in 1798. The family were everything you could want from prosperous to wealthy and considered the cream of society. However, this reputation only lasted until the eminent archaeologist Owen Phibbs brought home an Egyptian mummy. Residents and servants alike witnessed things move without a touch. A dark ominous figure relentlessly tormented them. At one point the whole house began shake violently. By this point, every dweller in the house fled, terrified, and no one returned. Eventually, the house’s possession was turned over to Jesuit priests in the early 1900s. They performed daily mass in order to exorcise the poltergeist. All attempts failed and the house was sold off once more in 1940. It was not long after that the house was dismantled and left as a roofless ruin.

A ruin as well as a national landmark, Duckett’s Grove also houses loud supernatural creatures. Visitors of the place report sounds of harmonious singing and organ music. The noises emanate at night from the grounds. On occasion hunting horns can be heard, too. Although most of the property was destroyed in a blaze, paranormal investigators still find their way to the spot. Everyone who visited has left with evidence proving that Duckett’s Grove is one of the many most haunted places in Ireland.

The past of Leamaneh Castle is just about as haunted as its current day remains. Máire ní Mahon or Red Mary gained fame in the 17th Century, for her flaming red hair and the murder of her third husband. One of the most infamous women to be part of Irish folklore she pushed her husband from a third-storey window. Tales of her speak that she wedded 25 men in total. Funnily enough, most of them died early on in similar fashions. Townsfolk eventually executed her by sealing her alive in a hollow tree trunk. She starved to death there. However, this is not the end of this chilling story. It is fabled that Red Mary’s vengeful spirit still roams her former home. Screams and taunting cackles are heard on occasion, echoing off of the castle’s walls. ­

The Kilmainham Gaol easily secures a spot on any list of most haunted places in Ireland. Once one of the largest prisons in Ireland, it was decommissioned in 1924. Since then it was reopened as a museum to the public as a museum. Visitors who venture into Kilmainham Gaol are bound to come across more than a tour guide. When the building was undergoing restoration, tradesmen told stories of hearing footsteps on a regular basis, unaccounted for. These mysterious tales contribute to the legend of Kilmainham Gaol being one of the most haunted places in Ireland. Children have been known to halt at the threshold, refusing to go onto the ground almost as if they can sense the spirits.

Situated in County Cork, Belvelly Castle is fabled to be haunted by Lady Margaret Hodnett. Lady Hodnett was wealthy, charming and beautiful. In the 17th century, she was popular for her love for extensive mirrors. One of her suitors, Clon de Courcy, grew tired of waiting to wed her and so decided to seize the lands around the castle. The siege continued for a full year and she finally relented. However, by then much of her beauty had wilted away due to starving. Her suitor abandoned her. She was so grief stricken that she smashed all of the mirrors in the castle. To this day, her ghost haunts the castle’s walls making it one of the most haunted places in Ireland.

Built in 1533 by the Lord of Devon Richard Nugent (otherwise known as The Black Baron), Ross Castle has a love story entwined in its history. The Black Baron’s daughter, Sabina, met with an English gentleman and fell in love. The couple were deemed an unsuitable match and they were told to stay apart. However, they hatched a plan and decided to elope. Tragedy was soon to strike and the boat they were escaping in capsized. Sabina’s beloved passed away. Upon waking up she discovered the horror and fell into grief.

A few days later she was so overcome with distress that she passed away too. Legend has it that her spirit still dwells within the walls of Ross Castle in search of her deceased love. In the dead of night, her piercing screams can be heard sometimes jerking people awake. On occasion, The Black Baron himself has been sighted, roaming the grounds of the property, mourning his daughter’s death.

Captain Boyd became a national hero in 1861 after his gallant attempt at rescuing the drowning crews of over hundred shipwrecked ships. The endeavor at Dublin Bay was ultimately doomed. He lost his life but praise was voiced for courage. His funeral cortege was the greatest ever witnessed in Dublin. Among the throng of mourners was his dog. It is said that he faithfully followed Captain Boyd everywhere. According to legend, the Newfoundland stayed by his master’s grave till it starved to death. Visitors to the grave have witnessed a large black dog parading around the grave over the years. Sitting and even sleeping on top of it, the dog still patiently awaits its master’s return.

The long and bloody history of Leap Castle marks it as one of the most haunted places in Ireland. Built in 1532, it does not come as a surprise to hear of its haunted tales. From the many spirits who dwell in the castle, a creature who goes by the name of Elemental is the most popular. The evil and dark creature has a human face and is the size of a sheep. Black gaping holes take place of its eyes and it smells of rancid flesh. An oubliette was discovered around that time in the castle dungeon. Used to execute prisoners, the victims were thrown in a pit. They fell eight feet onto spikes mounted onto the floor. Alone and in agony, they were left to die there. The uncovered showed more than 150 bodies. Was Elemental called to the castle by the disturbed remains?

Ireland may be a gorgeous country but that does not mean it is safe from the horrors of the world. The next time you plan a trip to Europe, make sure to pass by the gorgeous country. The majority of the most haunted places in Ireland are castles and we all know everyone loves a decent castle. Plus, this is great ammo for your next campfire.