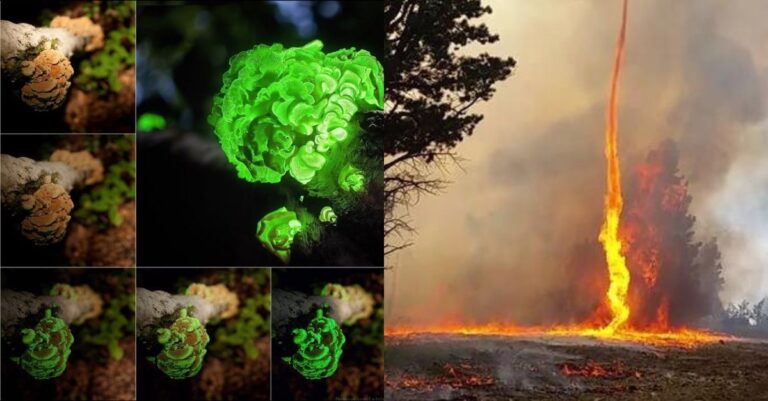 Have you ever looked at a map of Google images and saw something that sent shivers down your spine? How about hearing a story from someone about when they saw something so strange and peculiar that they didn’t know how it got there? This world is filled with strange things that are hiding either in plain sight or in cracks and crevices deep into a mountain or a river. There is a multitude of natural made wonders that still leave people questioning how these structures or wonders have gotten there, but are mainly wondering why they are there. They are beautiful at times, but they can also be weird and bizarre.

What are Natural Made Wonders?

A lot of wonders that happen in nature have been considered as some supernatural phenomenon in the past ages. But since the advent of science and understanding of the universe, these phenomena have been labeled as natural made wonders. Since they have a scientific explanation but happen so rarely, this title suits them best. Here are some of the astounding phenomenon that happens in nature due to bizarre scientific reasons. 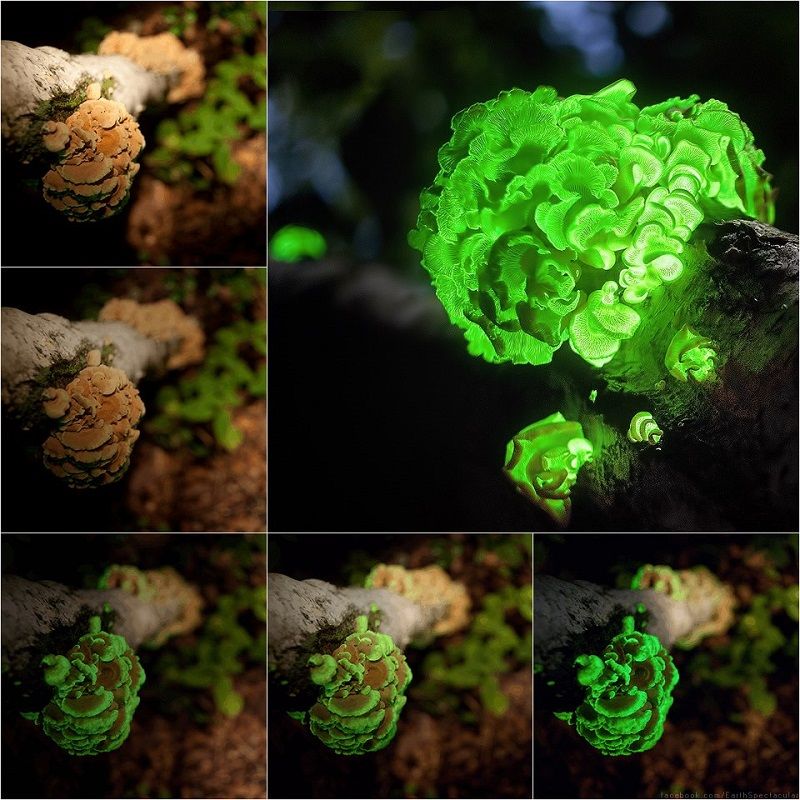 Firefox growing on a tree in the daylight and the night time.

No, this is not the Internet domain that people use every single day of their lives. Instead, this strange yet beautiful phenomenon happens when a fungus from trees that are rotting produce Bio-Luminescent light and creates this bright green color that people call FireFox. This can only be seen in the darkness of the night. 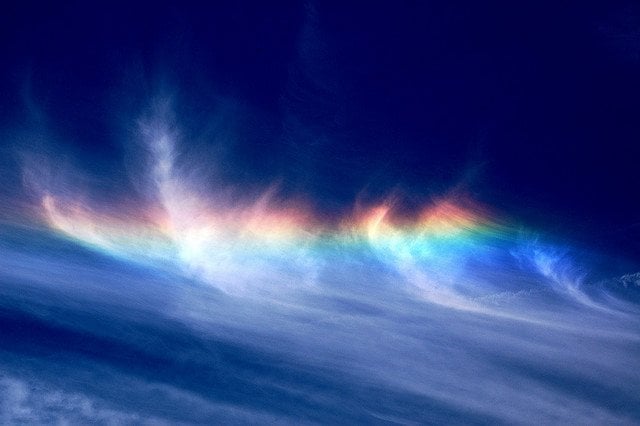 A fire rainbow high in the sky.

Everyone loves seeing a rainbow in the sky after a huge thunderstorm or rainstorm, and everyone goes crazy over a double or even triple rainbow that is stretching far across the sky. But, have you heard of a fire rainbow? This stunning natural occurrence happens as a result of the formation of plate-shaped ice crystals that are in the air and are infused into cirrus clouds. It’s a sight to see and can be a jaw-dropping sight for all! 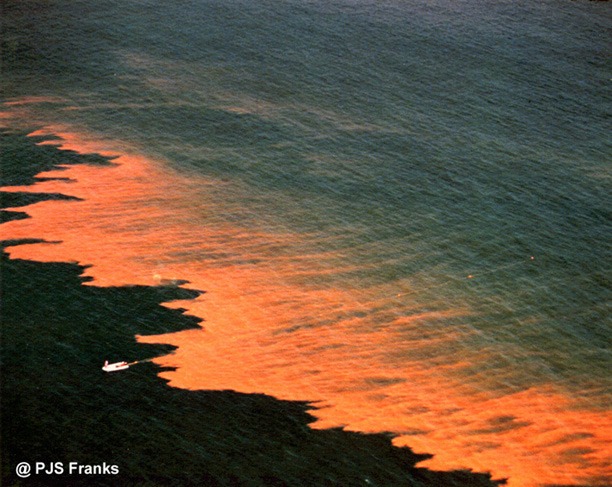 An eerie photo of Red Tide.

Have you ever seen this sort of tide at your local beach or in pictures on the Internet? This strange weird occurrence happens when there is a huge buildup of algae in the water. It causes a deep, blood red color that can be seen on the shore. 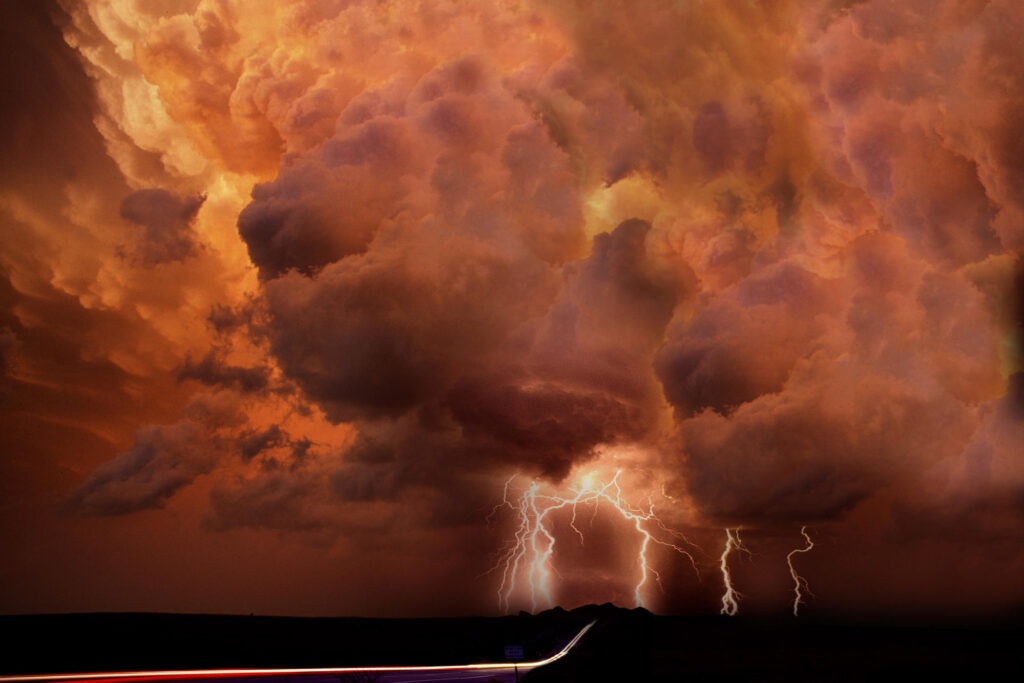 An ominous picture of catacumbo lightening.

As beautiful as lightning can be during a thunderstorm, this series of lightening is so unbelievably beautiful, you have to fight back the urge to get close enough to see it. The multiple streaks of lightning hitting the ground can send a strong surge of electricity through the ground and through any person that is standing close enough to it. 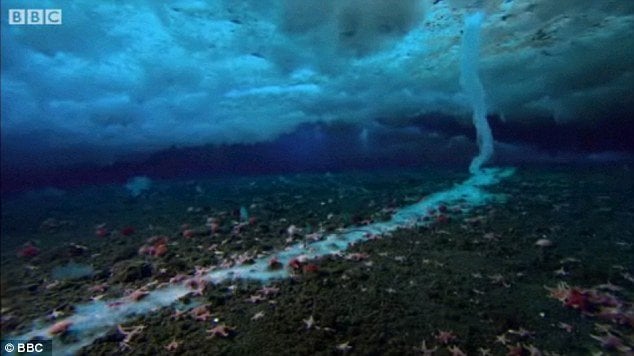 Brincle forming on the sea floor.

Looking like a long, white, decrepit finger coming from the sea, this rare phenomenon happens when salt water is excluded from the sea as the ice sinks within the ocean. Even though this is a sight worth seeing, it still sends a shiver down a few people’s spines because of how eerie and creepy it looks against the brightness of the sea floor below. 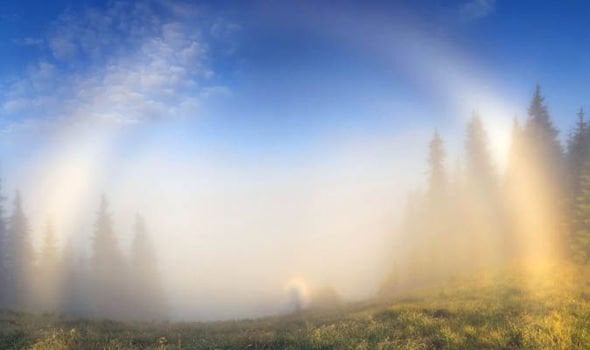 An eerie yet beautiful picture of a white rainbow.

This rainbow is colorless, however, it is still a bizarre natural thing that occurs within this world. It looks like someone is opening up a portal to another world because of how eerie and misty the center looks of this rainbow. 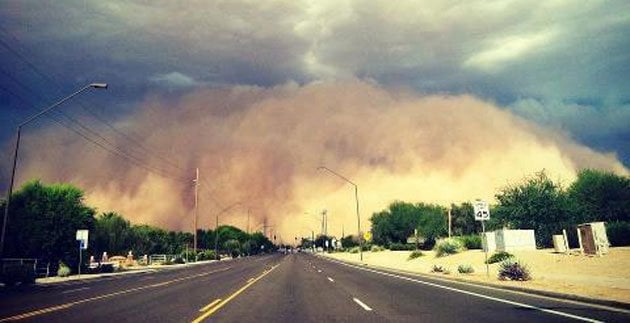 A sandstorm forming in the distance.

Have you ever witness a sandstorm in real person instead of just seeing it on movies? These sandstorms are as dangerous and creepy as they are depicted throughout movies. Within these sandstorms, there is a 0% chance of any type of visibility and if a person isn’t careful enough, the sand can get into their eyes and irritate them extremely. The sand can also fill the person’s lungs, making them have a difficult time to breathe. 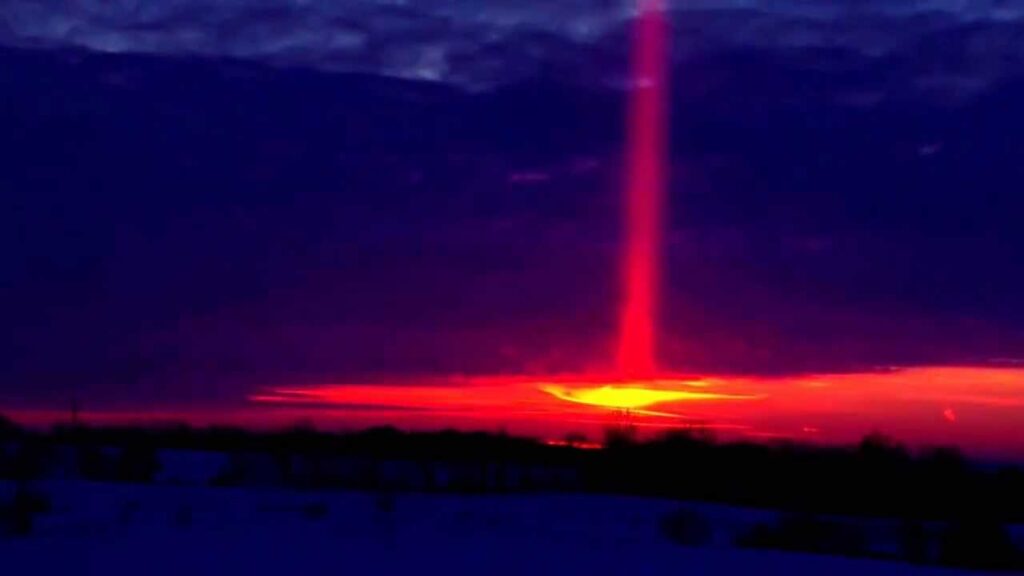 A creepy yet beautiful picture of a sun pillar.

These beautiful pillars are ones that cannot be missed if it occurs around your home. This particular thing happens when ice crystals are present in the Earth’s atmosphere and creates a stunning show of light in the sky. 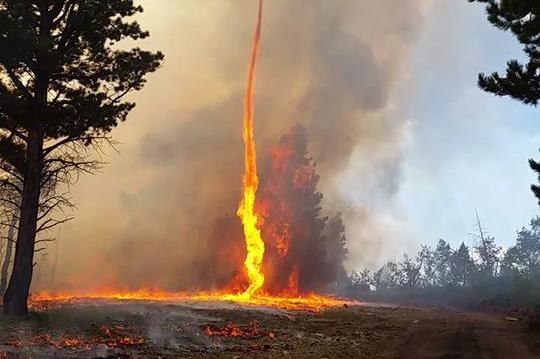 Tornados are already a terrifying natural occurrence that destroys homes and areas in a matter of seconds. Fire is another destruction that people flock from because it consumes anything in its path in seconds. But, when you combine these two elements together, how would you react? Firenadoes are natural occurrences that happen when a tornado sucks up a fire and continues on its path of destruction. 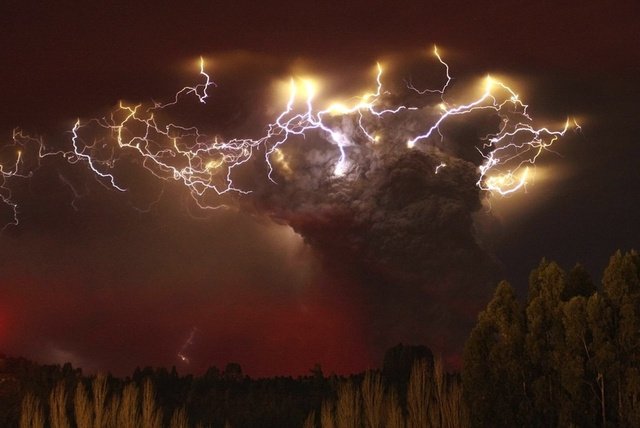 An eerie, ominous photo of a volcanic eruption with lightening.

Volcanoes are still labeled as unpredictable to this day because no one knows when one will erupt. That leaves a haunting feeling to people living near one because at any second of any day the volcano can erupt and destroy the homes and lives of everyone near it. Volcanic lightning is a creepy occurrence that happens when there is a mixture of charged particles and lightning when there is an eruption of a volcano. Even though it is a sight to see, it is a sight that sends shivers down anyone’s spine.

Mother Nature is indeed a force to be reckoned with, but, at the same time, it gives off such majestic looks that one ceases to remain oblivious of the beauty of nature. With monstrous occurrences like volcanoes, sandstorms, The Catatumbo Lightning to harmless white rainbows and bio-luminescent algae, every phenomenon out there is as beautiful as heaven itself. There are various examples of passionate researchers who lost their lives while getting too close to the beauty they perceived in the destructive portent of Mother Nature.

People have lost lives while getting too close to volcanoes, getting inside a massive thunderstorm, falling inside a volcano. It is human nature to be so passionate that curiosity overcomes their feeling of fear and as a result, they either gain great knowledge or simply lose their lives. There are countless natural man-made wonders that are yet to be uncovered and relished by those who have the eyes to perceive the beauty.