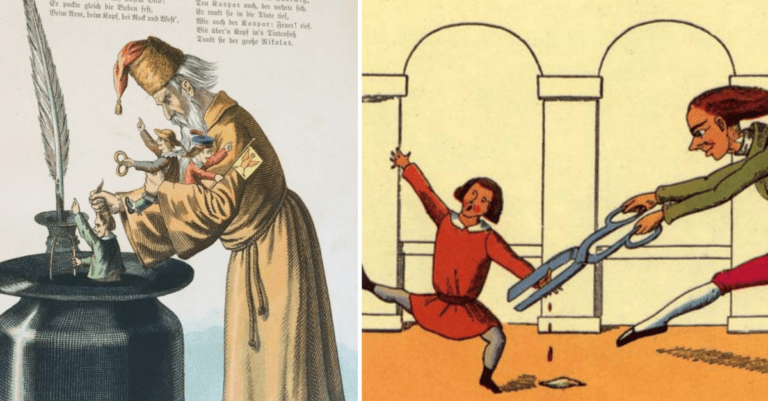 Children’s books are supposed to be loving, funny, and teaching children life lessons through colorful pictures and silly stories. However, Germany decided to make a twist out of children’s stories. Germany has a collection of children’s stories called Struwwelpeter. They’re stories that people read to their children before they go to sleep so they could drift off into a sweet deep sleep- or maybe not so much. The title of the book can be translated into two things: “Shockheaded Peter” or “Slovenly Peter”.
VIEW AT AMAZON [English Translation] 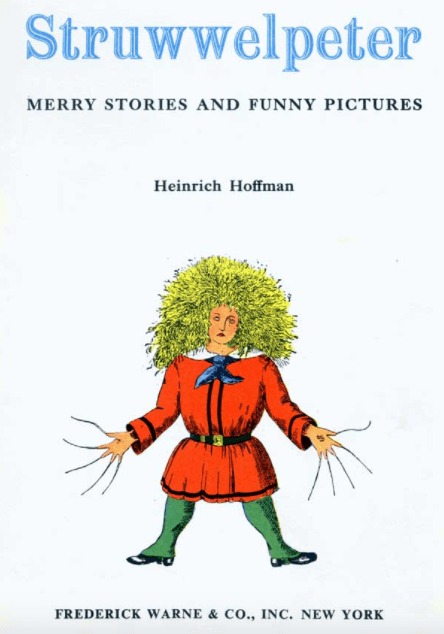 The cover of this creepy children’s book.

The books’ stories consist of children misbehaving or acting naughty which ultimately lead to consequences. The consequences, though, aren’t the ones you typically see when a child misbehaved. The type of consequences in this book are drastic that range from merely falling into water to death itself. No, I’m NOT kidding. 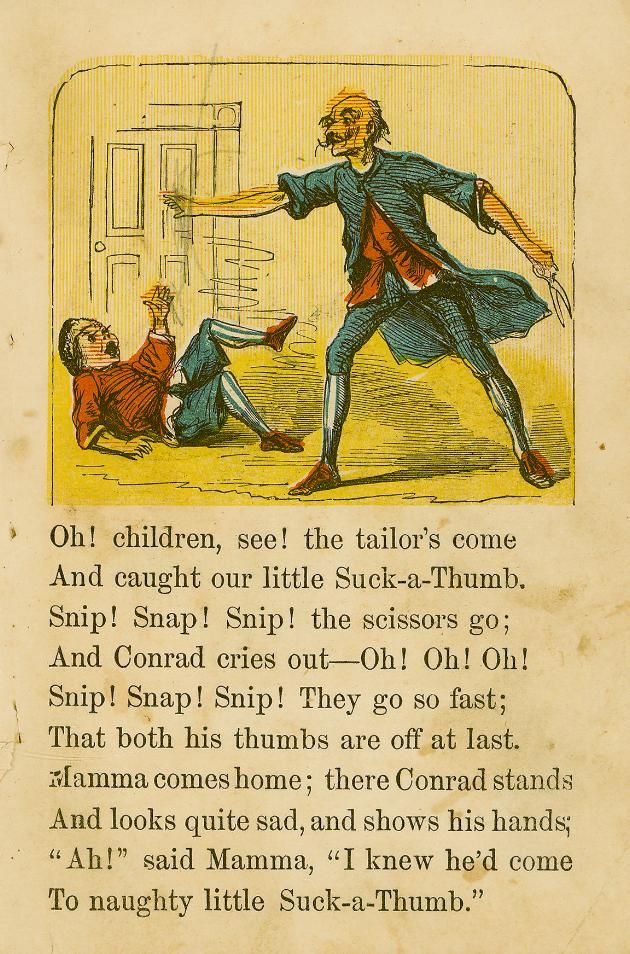 An exert from one of the stories.

These stories were created and illustrated by the German physician and psychiatrist Heinrich Hoffmann. He wrote this book because he claims that there was a lack of good children’s book and published his work of art in 1845. He originally was going to purchase a book for his 3-year-old son, but decided to write his own children’s book. 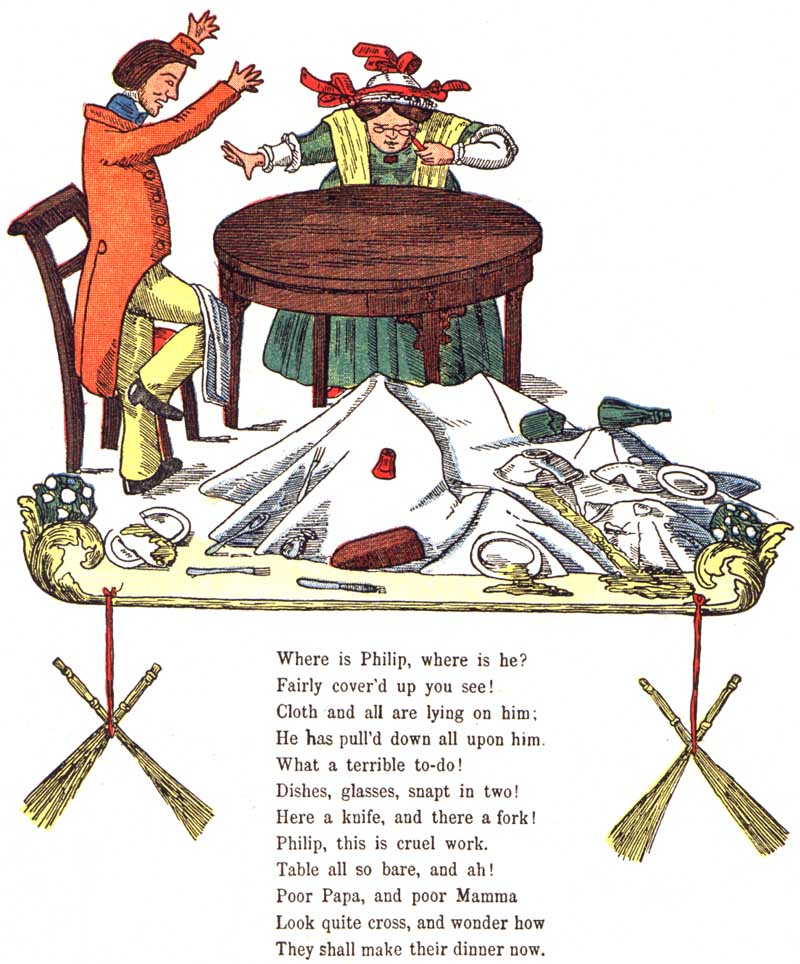 One of the stories in the book.

This book has become one of the most successful books in Germany and because of its success, it has been translated in more than 45 languages around the world. Here’s a fun fact: the english version of this story was translated by Mark Twain! Listed below are some of the stories this nightmare fuel book has within its pages. 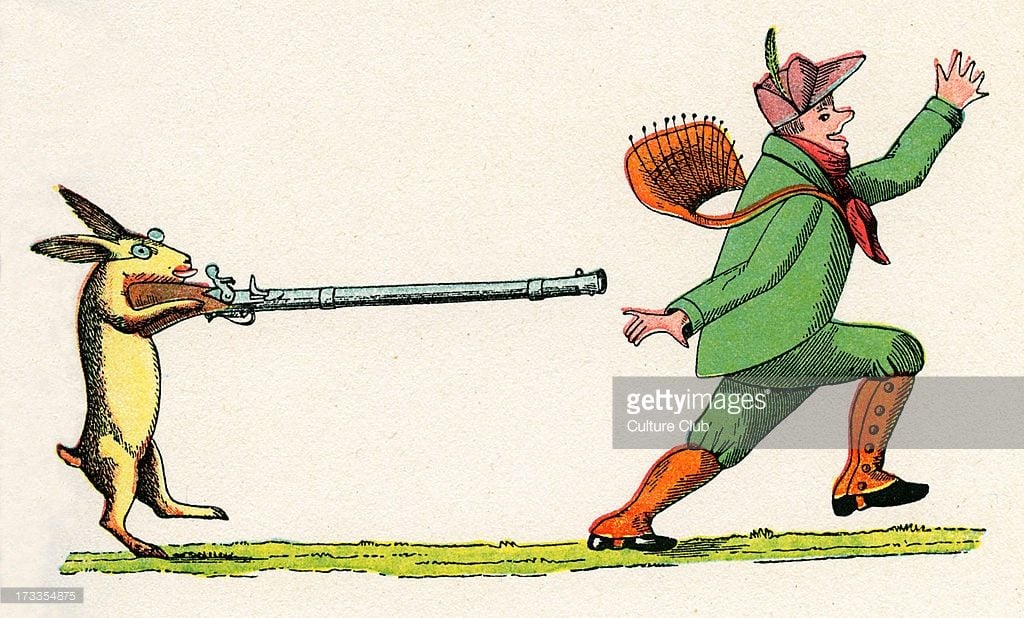 An image from one of the stories.

The title of this story is translated to “The Dreadful Story of the Matches” and is about a girl playing with matches and burning to death for doing so. That’s pretty intense and dark for a children’s book. 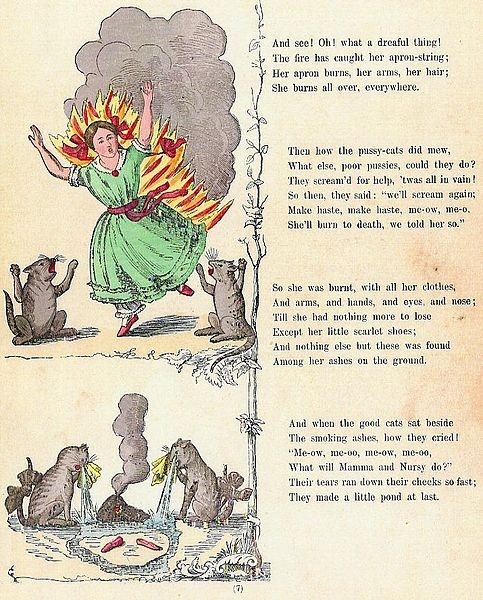 “The Story of John Head-In-Air” is about a boy who never pays attention to where he is walking. Because of this, one day he happens to walk into a river and gets rescued, but his school bag unfortunately drifts away in the water. 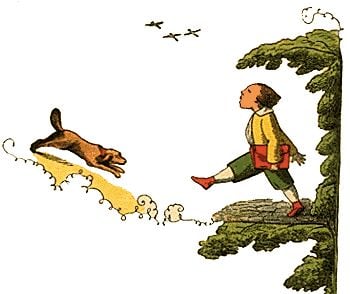 This story is about a boy who doesn’t take care of himself all that well and has become unpopular because of it. 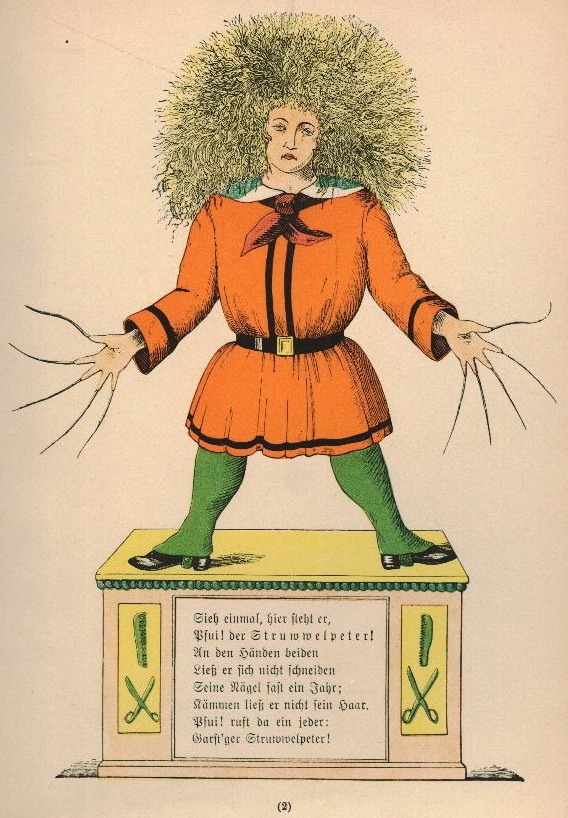 Translated to “The Story of the Black Boys”, the story is about Nikolas catching three boys teasing a dark-skinned boy one day. To teach them a lesson about teasing someone else, he dips the three boys into black ink. 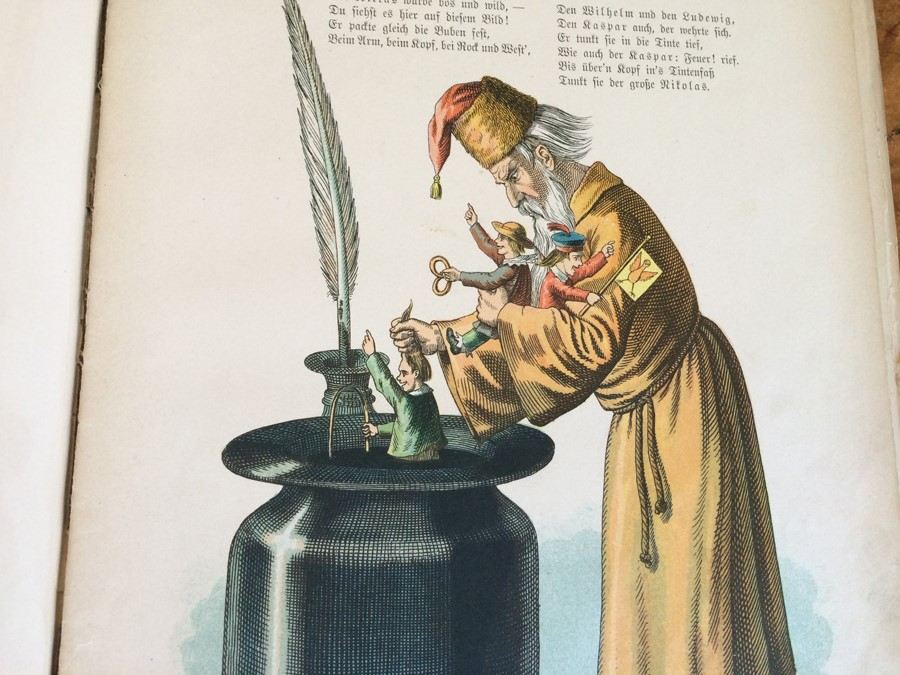 This story is titled “The Story of the Soup-Kaspar” and is about Augustus, who is a strong and healthy boy, proclaiming he will not eat his soup ever again. Because of him not eatinghis soup, over the next five days he wastes away and dies. 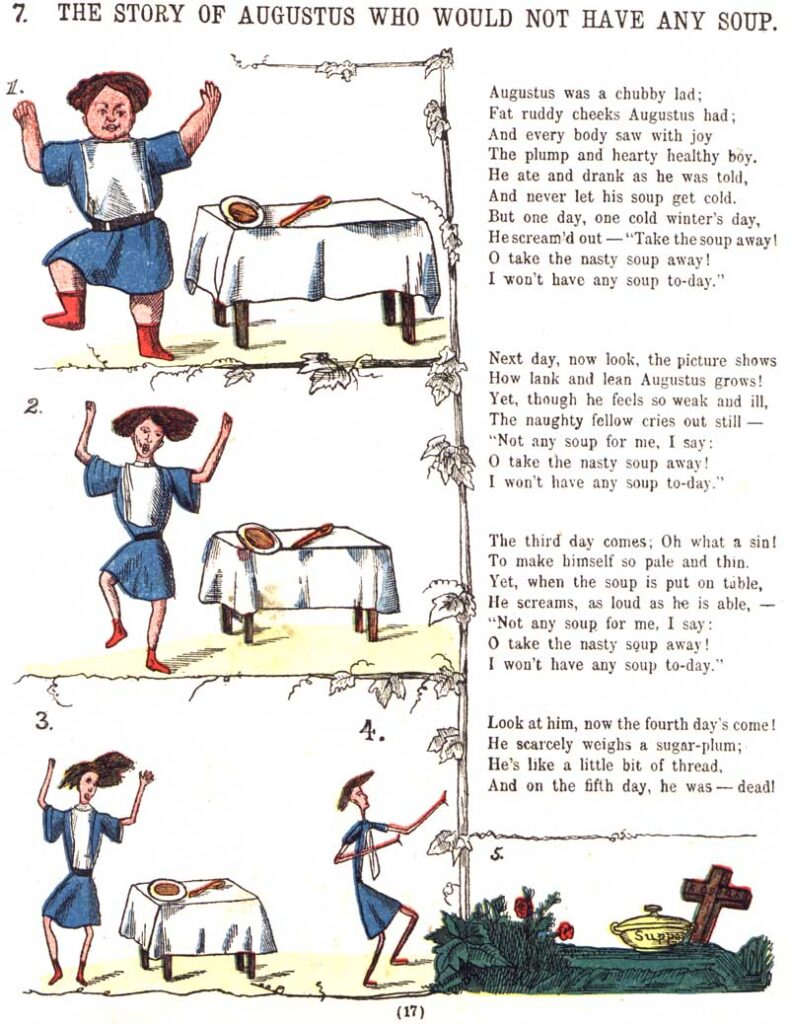 Translated to “The Story of the Thumb-Sucker”, this story is about a mother warning her son not to suck his thumbs. After she leaves, the boy continues to suck his thumbs until a tailor comes into the room, sees the boy disobeying his mother, and chops his thumbs off with giant scissors. 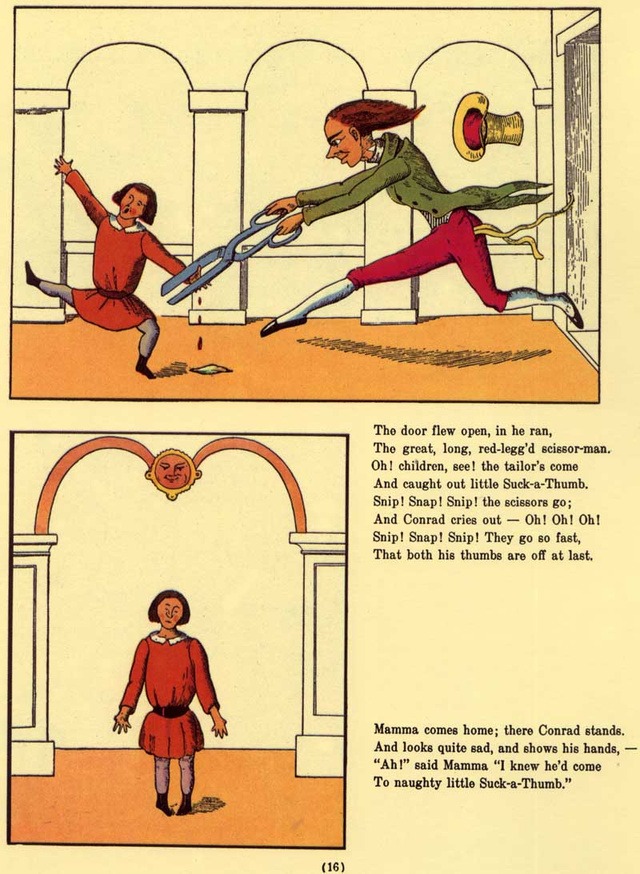 Are you willing to read this entire book to see the other stories in it? As stated, this book is extremely successful and teaches children lessons in strange, dark, and gruesome ways. It’s one of the best stories to read a child before bed, but it might give them a nightmare or two.