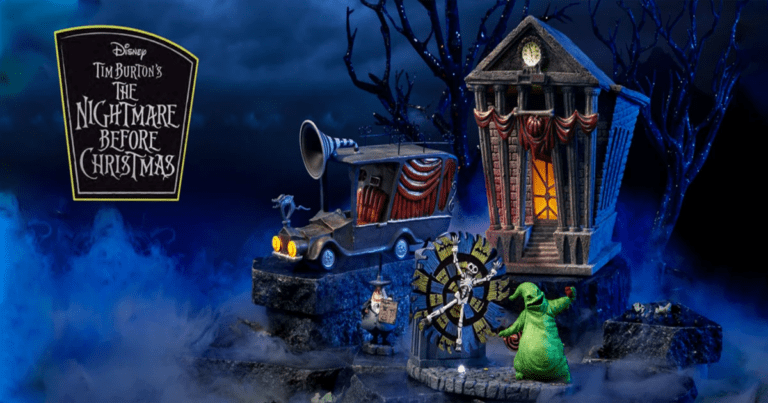 Tim Burton’s The Nightmare Before Christmas has gotten quite a wealth of merchandise recently. While the director’s movies have always been popular in that department, it’s got a whole lot more goodies to choose from in recent weeks. One of the most recent is the village from the film, as made by Department 56.

Alongside the village’s buildings, there are a range of figurines, so buyers will be able to populate the small town as they see fit. It should be noted, however, that many of the buildings come separately, though they do come with their own figurines. As such, potential buyers might need to spend some time thinking before they take the plunge.

While many people will want to buy the entire set, the main choice is which part they should buy first. That being said, the Jack Skellington House, which includes the character and Sally, maybe the most attractive one. That being said, each of the Nightmare Before Christmas village buildings look amazing.

Even the Crow Creek Covered Bridge is available, with the model featuring some purple lights. While each of the buildings are the core attraction, the figurines that are on offer can add a few highlights to the overall village. This is especially true considering that Jack Skellington is available in a few outfits and poses.

For example, buyers can find him at the well with Sally or next to a chimney, dressed as Santa. Department 56, who designed and produced each of the models, certainly spent a great deal of time on the detail.

You can get Zero too,

Regardless of which Nightmare Before Christmas village buildings are bought first, it looks as though it’ll be a great and fun investment. After a while, anybody should be able to create their own miniature version of the entire village, which could prove to be quite a Christmas decoration collection.

You can also purchase these items at Amazon.