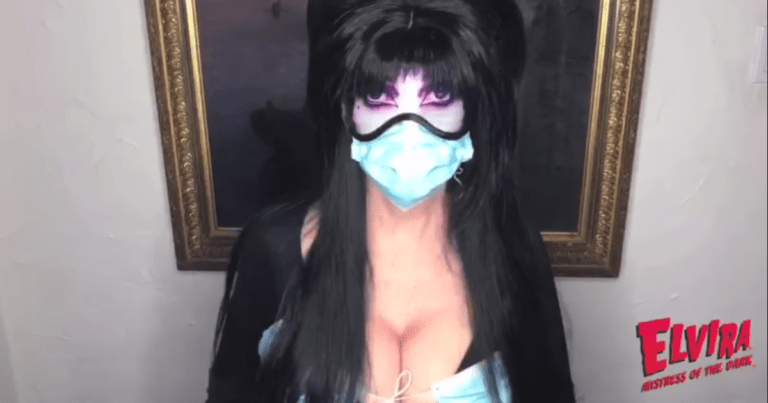 As everyone is inside, there is lots of time to catch up on or rewatch some cinematic classics, and Elvira herself is here to give some stellar recommendations on what to get stuck in to first.

Taking to Twitter the other day, the Elvira actress Casandra Peterson started off her list by saying that the films she was suggesting belonged in the ‘It Could Be Worse’ category, as she tried to add a silver lining to the situation.

“I’m here to give you some suggestions about what to do when you’re sitting at home, bored out of your mind, and you need something to do” says Peterson as she dresses in the classic Elvira garb, which now includes an eye mask and face mask. “My suggestions are to watch some old, classic horror movies.”.

Her first suggestion is for the Stephen King classic Misery. Peterson exclaims “I love this movie so much. Just think about it: you’re trapped at home with one other person, in a cabin, at least you don’t have a crazy lady there with a sledgehammer, right? Or, I’m assuming you don’t. I’m hoping.”

Her second recommendation is for the Romero feature Night Of The Living Dead. “It is a great movie.” Elvira explains “You’ve got seven people this time trapped in a house together and not only do they really start butting up against each other, but they’ve got flesh-eating corpses outside trying to get in, so it could be worse, right?.”

Elvira’s third and final choice is for her own film Elvira: Mistress Of The Dark but assures viewers that it doesn’t fall under the ‘It Could Be Worse’ category and she isn’t simply trying to self promote, she reasons that “it’s just good for a laugh. I’m not pitching this because I get any money, because, believe me, I don’t, not a cent. It’s just a damn funny movie. I’ve watched it one billion times and I still laugh. I love that movie.”.

Do you have any stay at home movie suggestions? Let us know.