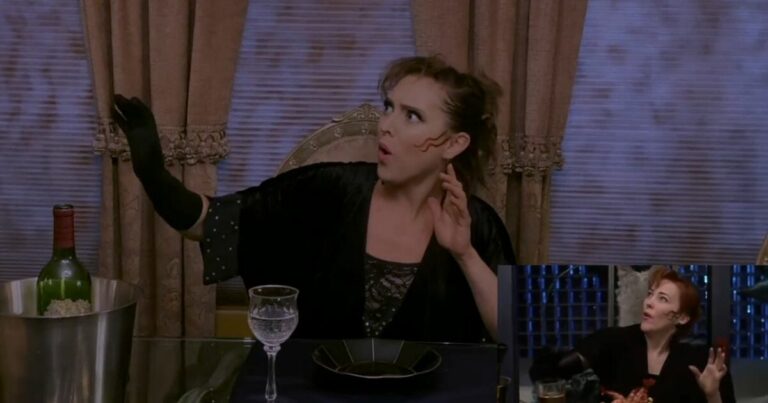 Tim Burton’s Beetlejuice is iconic, to say the least, with unforgettable performances, unique direction, and ingenious design the film as a whole is at the top of a lot of people’s all-time favorites list. One scene, however, stands out from the rest as being an iconic turning point in the movie, and we barely even have to mention what it is before you can guess what we’re talking about.

The dinner party scene from Beetlejuice depicts the overdramatic Delia Deetz and her guests becoming possessed by the ghostly Maitlands who force the partygoers to perform a fantastic rendition of Harry Belafonte’s ‘Banana Boat Song’ including a, particularly hilarious dance routine.

And now Youtuber Gelsey Laurie has added the scene to their growing Youtube repertoire. Laurie and her father display a picture-in-picture version of the original movie as a comparison to their performance as they portray their own two-man interpretation of the iconic clip.

With surprisingly accurate costumes the duo takes on the role of all of the party guests in alternating cuts, which adds another layer of joviality to their homemade recital. The amateurish nature of their performance doesn’t detract from the video at all, adding an excellent homemade feel, especially when it comes to the ‘prawn hands’ finale.

In the original film, the conclusion of the scene was reportedly quite difficult to shoot due to the fact that the people who were doing the face grabbing couldn’t actually see where their hands were going, resulting in some unavoidable eye-poking! They even tried shooting the take in reverse thanks to the suggestion of D*** Cavett who portrayed Deetz’s art agent Bernard.

This isn’t the first movie scene that Laurie and her father have taken on, however, as their past exploits include The Muppet’s Cabin Fever, Rocky Horror’s Time Warp, and Mary Poppins’ Spoonful of Sugar.

At the time of writing, Laurie’s channel only has just over 500 subscribers, but hopefully, once their quarantine antics start to catch on they can gather more of a following!

Don’t forget to check out their video below and if you enjoy it, head on over to their Youtube channel for more.