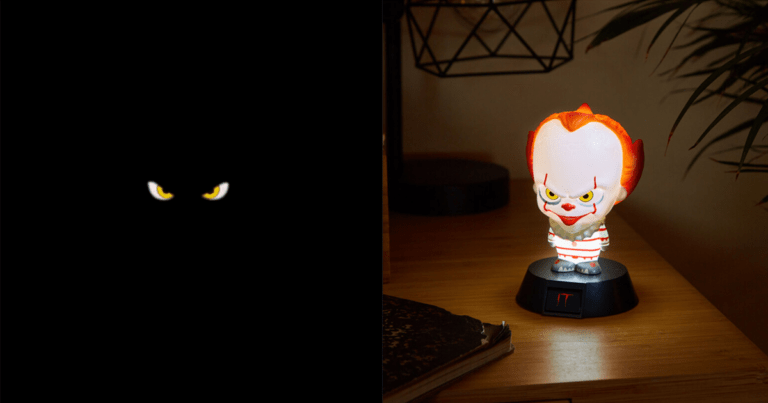 There are very few horror icons that you would want to see when you’re just dropping off to sleep, but we think that surely Pennywise the murderous demon clown is somewhere at the top of that list.

This new lamp stands at approximately 10cm tall and is being sold by the novelty gift marketplace Firebox. The light-up figure is officially licensed and even comes with its own batteries!

Even though they chose not to include the clown’s signature red balloon, the product is described at being “Adorable and terrifying at the same time” and we most certainly agree!

“The Losers Club went through…Hell to rid Derry of that nasty ass clown and they didn’t even get anything to show for it.” reads the description before saying that the children should’ve picked up one of these “adorable diddy rendering[s] of every child’s worst nightmare that glows in the dark.”. As if they would need a souvenir of their time in the sewers!

When it comes to placement suggestions Firebox say that it would make a good conversation starter if you use it as a cool centerpiece, or if you’re feeling brave then have it by your bed and use its multifunctional light to make the figure of IT either fully glow in the dark, or leave only the eyes shining in the darkness. Finally, they also suggest that you could “just stick him in the gutter where he belongs and pray he doesn’t come after you. Saves you all the awkward questions.”

If you can’t get enough of the demonic creatures red balloon however then fret not, firebox also has a separate but equally iconic lamp that you may love just a little bit more!

So if that sounds like something that won’t keep you up at night, head on over to Firebox.

At Entertainment Earth they also have some cool Pennywise balloon lamps. in case you missed it, you can see them here.