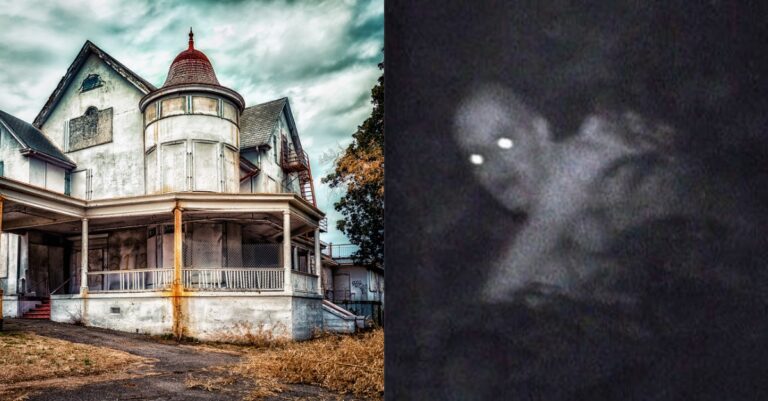 Have you ever been surfing on the Internet and stumble across videos that have the title “ghost caught on tape!”? Then, once you click the video you can clearly tell the video is fake and someone completely staged it? Well, that’s not the case for these videos. There are actual videos are that there make people believe in the paranormal because of how genuine and scary they really are. They will make you triple check things before you go to bed to make sure that nothing is out of sorts and they will leave you wanting to explore the paranormal even more than before.

Ghost Videos To Proof Ghosts Are Real Like We Are

A still image of what appears to be a ghost figure jumping onto the tracks.

This particular sighting took place in Knightsbridge Station in London. The video is haunting and has left viewers in disbelief, making them watch it over and over again to try to see if they can debunk it. The background of this sighting is that this London underground system is deemed one of the most haunted locations in Britain. As viewers watch the video, they can see a hazy, almost mist like figure of a man standing on the edge of the walkway and then jumping onto the tracks. Here’s the link for the video. Do you think it’s real?

A still image of one of the hallways that encountered paranormal activity in the video.

This creepy video took place in Manchester, United Kingdom and will send chills down your spine. The backstory of this particular video is haunting and eerie, just like the video itself, and has become one of the most popular videos on YouTube that shows an actual poltergeist. On November 1st, 2012, the security staff that was monitoring CCTV at an office in Castlefield House on Liverpool Road in Manchester caught the spine chilling poltergeist on camera. Linked here is the events the security guards captured as they switched from camera to camera.

https://www.youtube.com/watch?v=LKiS7QcQ084
An eerie photo of the Barton Mansion.

Located in Redlands, California, the Barton Mansion is one of the oldest houses here and is reportedly one of the most haunted places in the Redlands. What makes this house so haunted, according to the legends about it, is that the mansion was built on a Indian burial ground in 1850 by Dr. Barton. He ignored all of the warnings that the locals gave him and continued to build this mansion on top of the ancient burial ground, and soon after he built it moved in with his wife and two daughters. After shortly living there, his wife and two daughters mysteriously died from unknown circumstances. Dr. Barton was rumored to be driven mad by the grief he had from losing his wife and daughters, making him turn into a Satan worshiper. After Dr. Barton had passed away, the mansion was left abandoned.

In the year 2001, a group of teenagers decided to take an adventure up to the Barton Mansion to see if the claims of it being haunted were real or not. After they searched the house, the reported that they found a piece of raw meat sitting on the basement floor, surrounded by stones. That occurrence happened during their first visit to the mansion, which intrigued two teenagers to return to the mansion the next night. They brought a video camera with them so they can record what they found. Here is the following footage they captured the second night they were there.

https://www.youtube.com/watch?v=Dc3CYYte_f4
A still of what this haunting figure looks like.

This video is from Blackburn and Belmont, which is located in Lancashire, United Kingdom. This video went viral in 2015 from becoming popular on YouTube to becoming popular on news stations from around the world. A couple were in their car when they recorded a hunched over figure on the road on their phone. Watch here to see just how creepy the figure is.

The entrance to Horton Mine.

Source: Only In Your State

In Nevada, United States, there is an insanely haunted mine that has been abandoned for years. One day, an explorer stumbled upon this mine and named it the Horton Mine. Below is his own words on just how disturbing this mine is:

“I had a startling encounter with the supernatural while exploring the abandoned Horton Mine located near the massive Victorine Mine in Nevada. The Horton Mine dates back to the mid-1800s. I have been inside over a hundred abandoned mines, but this one was definitely the creepiest. As I ventured hesitantly down the tunnel, it felt more and more wrong. You’ll see in the video the supernatural occurrence that caused me to ultimately turn around and head back out of the tunnel.“

Watch what he discovered here.

A still shot of this creature. What do you think it is?

In Catalonia, Spain, a video of something paranormal was captured and became an instant hit online. There is no further information about the video, except where it was film, making it even more creepy and eerie. It first hit the surface of YouTube in 2006 and from then grew to be one of the most popular paranormal videos to date. The video is of two men who explore a forest at night and stumble across creature that is later described as a fallen angel. Other names that have been given to this mysterious creature are chupacabra, ghost, and a demon. It is still one of the most mysterious videos online and to see it, click here.

https://www.youtube.com/watch?v=U3q_ZyoEpUs
The forest where transparent figures can be seen walking through the woods.

Gettysburg, Pennsylvania is one of the most haunted locations in the world. People have reported that when they visit this iconic location they see spirits walking the old battlefield or they hear strange noises when they are completely alone. This particular video, though, is reported as one of the best ghost videos to ever be recorded. In 2001, Tom Underwood was visiting the battlefield of Gettysburg with his family and captured this incredible evidence on video. This was at Triangular Field and shows semi-transparent figures walking through the woods following one another. This infamous video can be watched here.

https://www.youtube.com/watch?v=A20U_UVE7_g
The still image of the figure being caught on camera. Do you think its a doctor or something else?

Located in Honduras, this hospital is known to be extremely haunted. In 2016, this video emerged on the Internet and people from around the world are still in disbelief about what is on this video. In the video, it shows a figure appearing out of nowhere it seems and then walking down the dimly lit hallway. People who have viewed this video believe that it was filmed at the School Hospital Universitario where a doctor supposedly committed suicide a long while ago. People report that his ghost still haunts the building and from time and time again he makes the lights flicker in the hallways and in the rooms where the patients are staying. See this figure walk down the hallway here.

https://www.youtube.com/watch?v=VSax1GUugJM
The circle indicates where viewers can see the apparition walking through the resort late at night.

Disneyland Resort, California, is one of the most haunted locations in Disneyland. This video, though, was taken on a security camera and shows a ghost walking the grounds late at night. The apparition in this video, though, is creepier than you think because it was actually captured on multiple cameras, not just one. People believe that this is in fact the ghost of Walt Disney walking around his park and admiring what has become of it. Watch the ghostly figure walk through the resort here.

https://www.youtube.com/watch?v=-rH6AwdvVg8
The circle indicates where viewers can start to see something come out of the door.

Illinois is home to one of the most famous ghost videos of all time. In this video, filmed at the Wingate Hotel on September 14, 2003, you can hear the security manager in the video talking to someone about people reporting claims of strange noises and sounds coming from one room in particular. People say there is loud screaming coming from this room as well, making hotel visitors believe that someone was getting hurt. In the video, as the security manager gets close to it, you can hear loud screaming coming from the room and the greatest mystery of all is that no one was checked into it. The following footage can be found here and is still a great mystery to this day.

Do you believe these videos are 100% real? Do you think they’re part of the fake ones that circulate around the Internet? People still claim that these videos are 100% authentic and nothing has been altered or edited, making them even more creepy and disturbing. I, for one, believe these videos are real because of the reactions of the people filming them and you can tell they really haven’t been edited or photoshop. Be careful next time you go to one of these locations, you might just stumble upon a creepy ghost or figure lurking around.