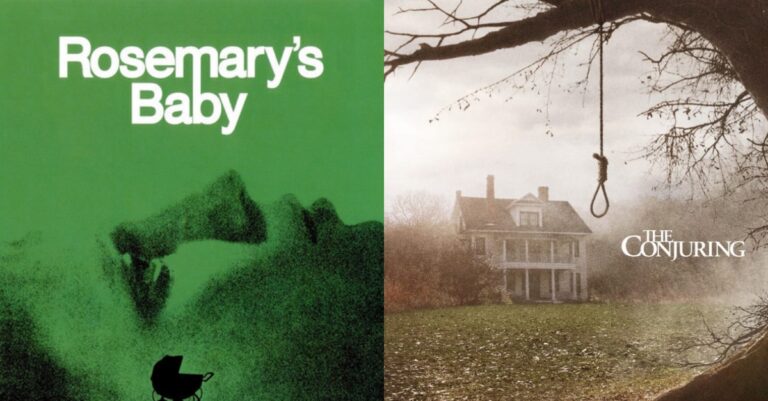 Horror movie fans love some good jump scares, enjoy watching people run for their lives, and get a thrill out of trying to figure out who is behind everything. These movies on this list are some of the most scariest movies of all time and will be sure to send chills throughout your body. If you haven’t seen them yet, make sure to watch them soon. They are movies you DON’T want to miss.

Horror Movies Series That Is Hard To Watch 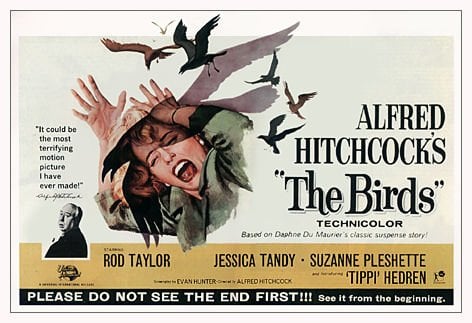 One of the flyers for this film.

This movie is proclaimed as one of Hitchcock’s classic movies because of the extreme build up of anticipation leading up to crucial scenes throughout the movie. The plot of the movie is that the birds, hence the title, are driven by a supernatural force to wreck havoc on strangers or their mortal enemies, making their intentions truly unclear. Alfred Hitchcock made this film a classic because of how intense the movie is and how the movie is overall a thrill. Click here to watch the trailer of this classic movie. 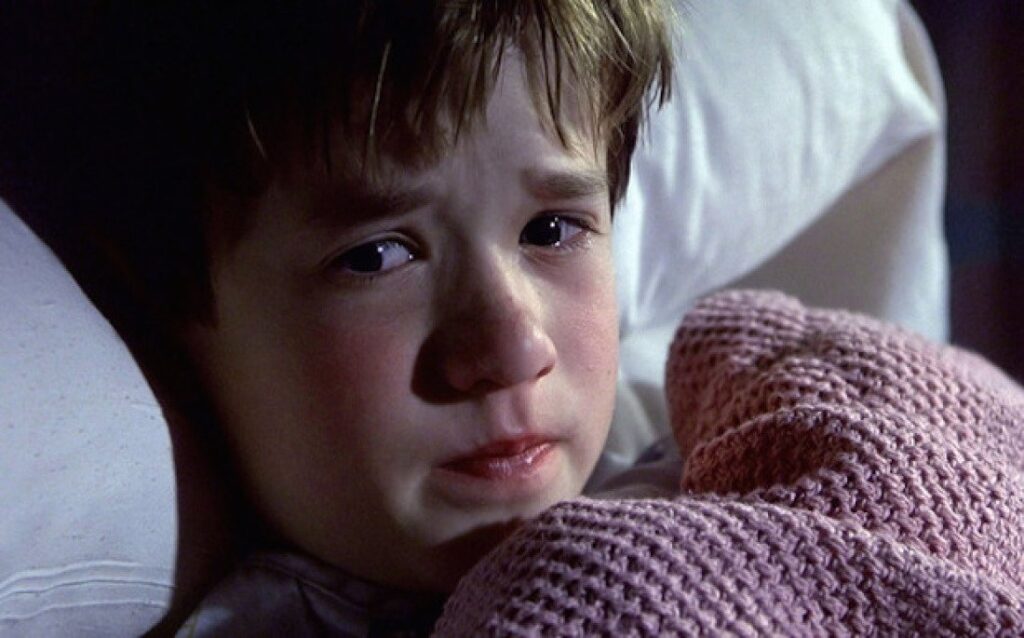 A still image from the movie before he says “I see dead people”.

One of movie history’s most iconic line came from this movie. You guessed it- “I see dead people”. People use this line practically every day in their life since it’s so perfectly mastered into this movie. M. Night Shyamalan created this movie and people proclaim that this was his peak performance work- and one of his only decent movies. Throughout the movie, there was exceptional elements of a horror-movie plot, a jaw dropping climax, and an ending that made people question their life, and had exceptional relatable characters. This movies allows the audience to not get bored of it as it unravels in a timely fashion. It’s a movie people do not want to miss because of how plot-twisting it is, making it one of the most iconic horror movies in history. To watch the trailer, click here. 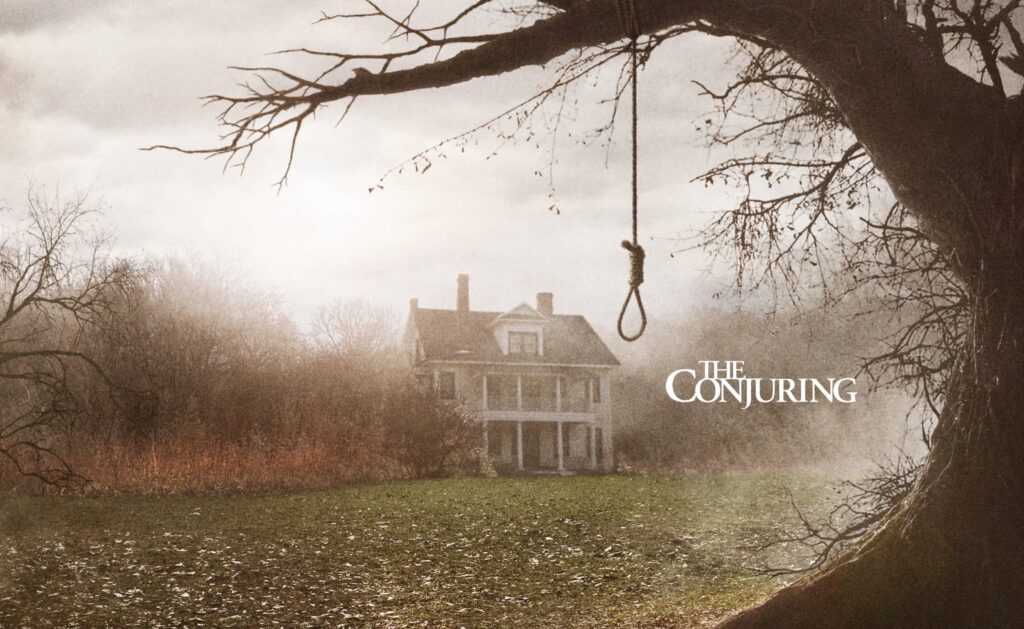 The haunting movie poster for this film.

This smash hit features one of the most haunted objects in the world- Annabelle the Doll. There are numerous shock elements throughout the movie, keeping the audience captivated every second. It also has a monotonous timeline, keeping the audience involve and scared. This is a movie that will have you hiding behind your blankets because of the shock elements it has and the overall vibe of the movie. Not only does it captivate the audience, but having this movie based on true, actual events makes it even more terrifying. To watch the trailer, click here. 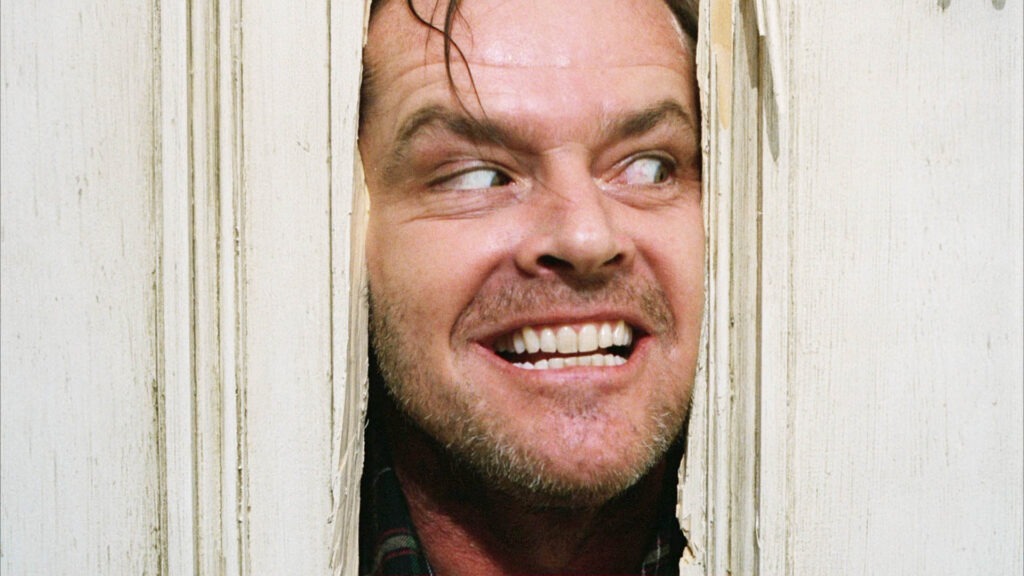 A still shot of the most known moment in movie history.

Stanley Kubrick is known to be the best originator of some of the most cinematic exploits. His love for horror, though, made The Shining one of the best horror movies in existence. Stephen King actually wrote the book the movie is based on, and he is one of the most iconic figures in the horror genre today. This movie is about a demonically possessed protagonist that became possessed by occupying a haunted hotel during a devastating winter. The spirits are so twisted and demented that they drive him to go on a murdering spree throughout the hotel. The events in this movie are proclaimed to be some of the best scenes in cinematic history and makes the audience sit on their edge of their seats while chills are forming throughout their body. To add to this amazing horror flick, the lead actress, Shelley Duval, claims that she is emotionally scarred from working on this film. To watch the bone chilling trailer, click here. 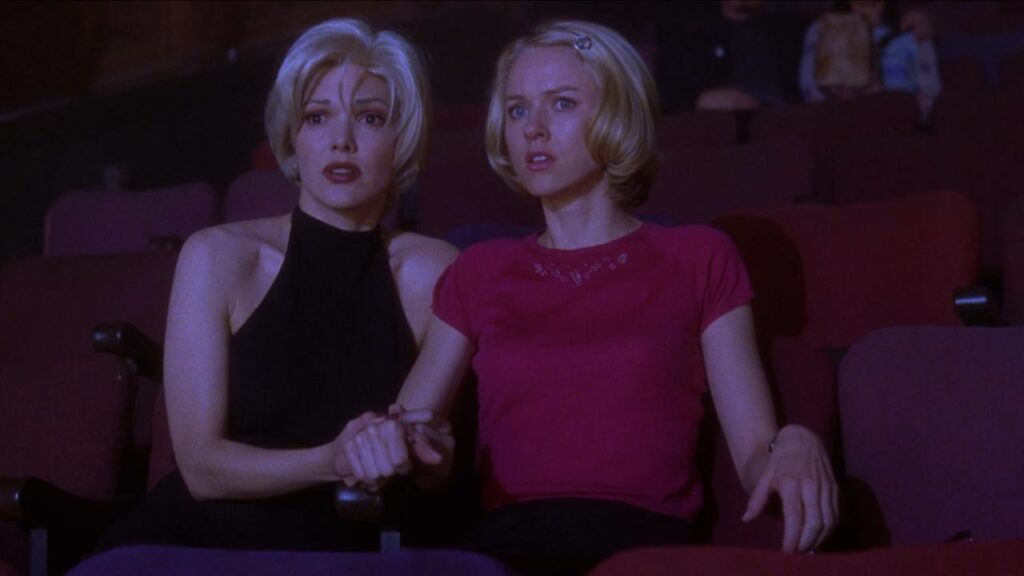 A still shot from the movie.

This movie is about a person losing their mind to their fantasies and even though that seems great and dandy, it is anything but. As people say, for something to be horrible, it doesn’t have to be other worldly things. This movie dives into two realities that are completely opposite of one another, and the movie highlights the psychological dichotomy of the protagonist in the film. To watch the trailer, click here. 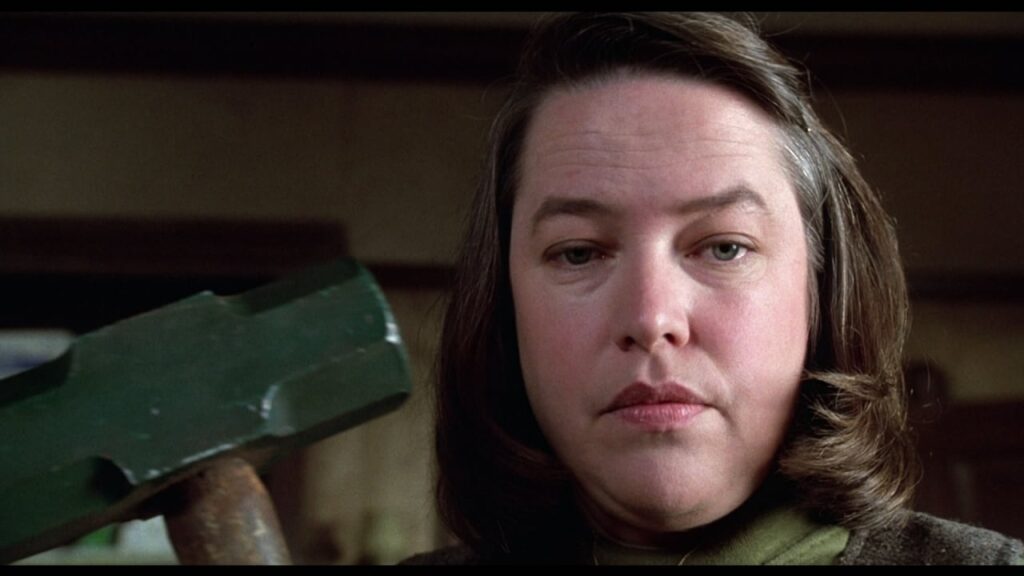 This movie is based off of the novel written by Stephen King and the movie is just as good as the novel. The protagonist of both the film and novel is taken captive by a clingy woman ad is kept in isolation from the rest of the world in a secluded area. The protagonist is place in an old-fashioned room and is kept there against his will, but he tries to outsmart the person who abducted him several times. This film is an instant classic and gives justice to the horror movie genre. To watch the trailer, click here. 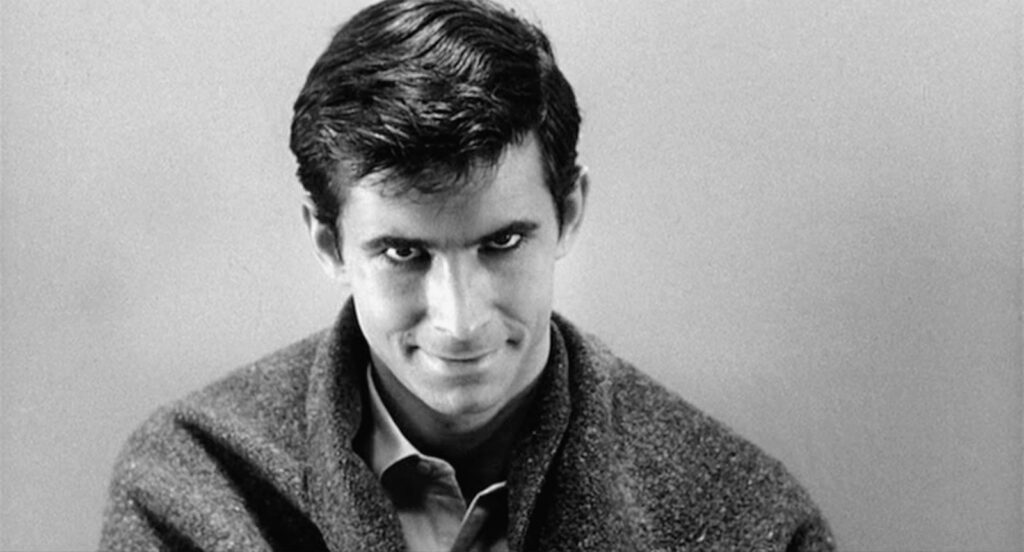 If you’re a fan of Bates Motel on A&E, then you will be a huge fan of this movie. The person in this movie, Norman Bates, is so mentally disturbed and unwell that this movie is just filled with twists and turns like no other. The pace in this movie is one to hold the audience’s attention and the visual effects of the film are appealing. The shock elements in this movie are saved towards the end, making the conclusion of this film worth the watch. It will leave a psychological mark on you and you will forever remember this psychological thriller. This movie holds one of the most iconic scenes in history that people, to this day, still use in films as an ode to this movie. To watch the trailer, click here. 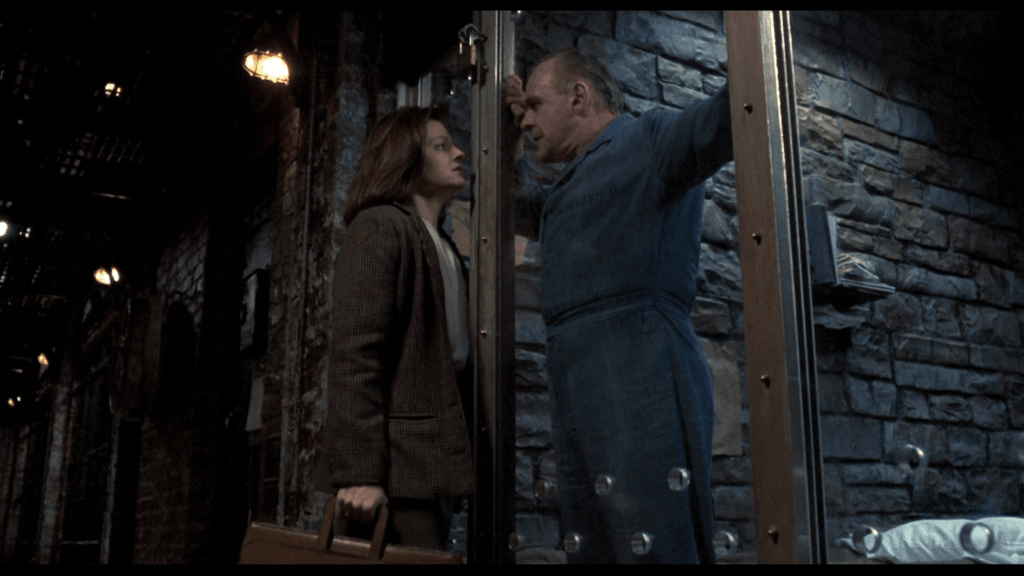 One of the still shots from this movie.

This is one of the most disturbing movies of all time because of how everything unfolds. The relationship between Clarice and Hannibal Lecter is an unforgettable one and it makes the viewers worry for Clarice’s future. The movie isn’t just about Hannibal Lecter, though. It also dives into the investigation for the other creep that is involved in this movie, which is Buffalo Bill. This movie will have you on the edge of your seat and will captivate you through the whole thing. To watch the trailer, click here. 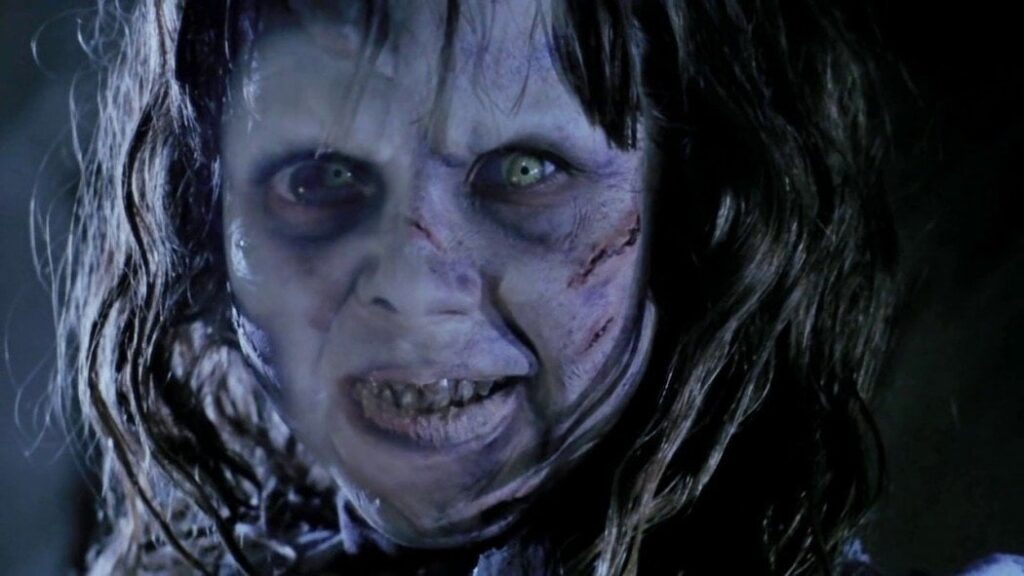 What the actress looked like after becoming possessed in the film.

This movie is one of the most gut wrenching horror movies in history because of its exquisite visual of an exorcism. William Friedkin, the director of this film, did an exceptional job capturing the uneasy undertone of this movie, something that other directors fail to do. The acting in this film will make you believe that the actors are not actors of Hollywood, but are instead real people witnessing this horrific event. The movie is also proclaimed cursed because whomever worked on the set of it or were indirectly involved with it ended up having some sort of tragedy happen in their life. To watch one of the scenes of this movie, click here. 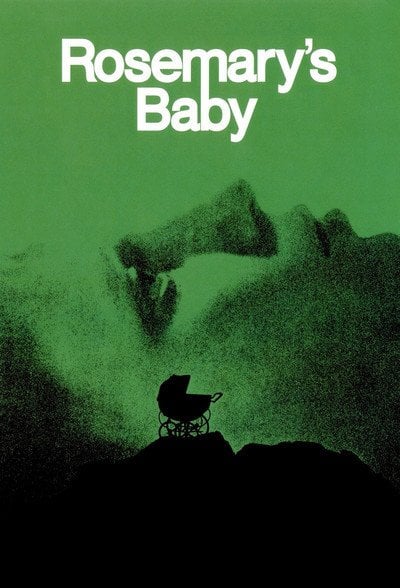 One of the eerie poster’s used for this movie.

The story of this movie is one that doesn’t need to remind the viewers that they are watching a horror movie because the story of this film follows the horrific event that turns the protagonists’ life around. It’s a unique film that will leave any horror movie fan speechless, but will make them talk about this movie like no tomorrow. People even question the fiction aspect of the film because the events are so real, making it an classic horror movie. To see the trailer, click here.