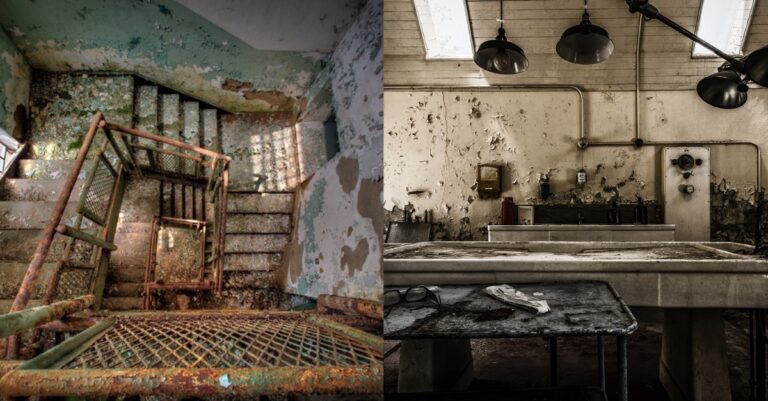 Abandoned asylums are often very disturbing places, and this increases if we mention you that they have broken windows, long corridors and unnamed tombs of old patients.

Most of these institutions are from the 19th and early 20th centuries, many of them offer tours to the public, and in many of them strange noises have been reported in the corridors such as disembodied voices and winding aspirations. Let’s see which are considered the most terrifying.

Built in the mid of 1800’s in Weston, West Virginia. At first it was intended to house 250 patients, but in 1950 it came to have an amount of 2,400 souls buried near the building, because of the very poor living conditions.

No one was sure that the facility treated their patients well, having evidence that, patients who were very rebellious, employees put them in cages.

For this and more, in the 90’s, the hospital closed. In 2007, the building was sold to private buyers, who offer guided tours of the haunted institution. Visitors can decide to spend the night in the hospital.

So, some former guests claim to have heard strange noises and faint voices, which would not be rare for the horrible life of those who lived there.

Originally known as the Poor Farm of Genesee County, it came out with the intention of being a house that would house orphans, criminals, the poor, the mentally ill or anyone who did not fit into the dominant society.

The patients worked the land, tended animals and supported the community. Most of them died living in the institution, so more than 1,700 deaths have been documented.

The dead patients were buried in unmarked graves near the property, so visitors claim to have heard screams at night and experience many paranormal activities.

This asylum in Hamilton, Ontario, Canada, was opened in 1976. It was a beautiful hilltop facility with a wonderful view of the place, perfect for psychiatric patients.

Doctors used treatments such as shock therapy, lobotomy, morphine injections, or locking them in a coffin.

This asylum was converted into a village museum in 1980.

This was not a psychiatric center at first, it was a pavilion for the tuberculosis sufferers and later it became a home for the mentally ill.

This building have an spooky underground passage that leads from the first floor of the sanatorium to the end of the hill. This passage was used to move the dead people from the view of the patients, is for this that they called it “the conduit of bodies”.

Due to this story and the amount of painful deaths that occurred in the place, is considered a creepy place to visit.

In 1903 was founded this asylum with a dark story. In this hospital the treatments of the patients were based on inhuman techniques. Nine employees in 1983 were accused of abuse, but it was not until 1987 that the institution closed.

Then, began to appear reports on sightings of paranormal activity.

Its opening was in 1986 and is considered the largest asylum in the United States, which remained in operation until 1995.

Part of the campus remains as a rehabilitation center, but the other is closed to the public.