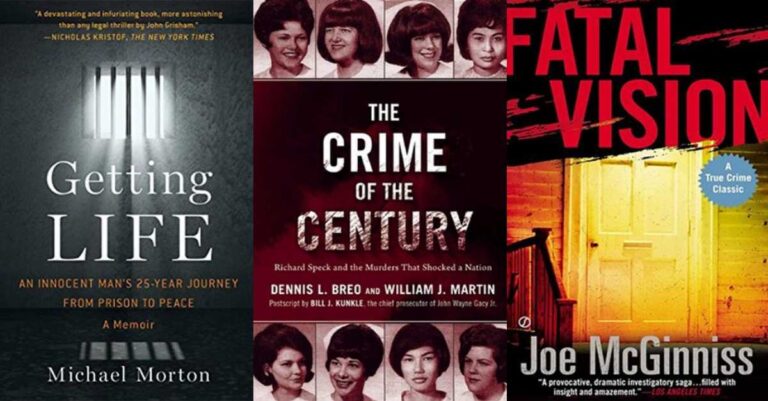 Ever since Truman Capote gave us his startling non-fiction novel “In Cold Blood” in 1966, readers have been thirsty for more. Authors from all the over the world met this demand by releasing books that depict and recount some of the most horrifying real crimes. From Blood and Money to Helter Skelter, true crime novels’ fan following simply increases over the years. The gripping and chilling novels are improved with the extra component of reality.

Whether you are an avid reader or not, these true crime novels from the previous 50 years will undoubtedly have you hooked.

The start of all true crime novels, this masterpiece has earned the title of the first non-fiction novel. The story revolves round the terrifying of the murders in the Clutter Family in Holcomb, Kansas in 1959.

The influence and power of Manson over his followers in the summer of 1969 is recounted in the murder case by the prosecuting attorney.

Joan Robinson Hill, the gorgeous socialite, who fell ill mysteriously and died shortly after was indeed murdered. Thompson won the Edgar Award for this book.

The serial killer next door, John Norman Collins, from Eastern Michigan University. The story of an all-American fraternity boy who terrorized the college town, Ypsilanti, in 1967 and murdered young women.

The “Goodbar” murder which later inspired a novel and movie by the same name is a true story. Looking into the death of a Catholic school teacher, Roseann Quinn, who was murdered in her Manhattan apartment, the grisly tale is one to read.

In 1973, Peter Reilly, an 18-year-old was accused of murdering Barbara Gibbons, his mother. The story takes us to his trial and the Canaan, Connecticut community that stood for him.

In 1976, Gary Gilmore murdered and robbed two men. Once convicted he demanded an instant death by the firing squad in a system that ran on slow execution sentences. This Pulitzer winning book highlights Gilmore’s fight for death.

The uncanny friendship with serial killer Ted Bundy is discovered in Ann Rule’s true crime novel prior and subsequent to his capture.

In 1970, Jeffrey McDonald was accused and convicted of murdering his wife and children. The bestselling 1983 novel drew plenty of criticism for supporting the conviction.

In the 1970s, Los Angeles was terrorized by the Hillside Stranglers, Kenny Bianchi and cousin Angelo Buono. Their relationship is highlighted in the book.

In 1969, an obsessed reported who wanted justice penned down a first-hand account of the 11-month reign of terror in San Francisco by the Zodiac killer.

The Killer Clown, John Wayne Gacy, speaks about his 33 murders in suburban Chicago in detail in exclusive interviews with Cahill.

An unfortunate twist of events led nine people, all connected by jealousy and love, dead in between 1984 and 1985. In North Carolina, Bledsoe recount the horrifying details in his true crime novel.

Two teenagers take their love to a whole new level. Karin Aparo convinces Dennis, her boyfriend, to kill her own mother, Joyce.

Three escaped convicts murder Jerry Alday and the rest of his family in 1973. Cook recounts the incidents in his chilling true crime book.

Tim Braggs was a soldier who was tried thrice and convicted at last for the murder of a mother along with both her daughters. The murder took place on Mother’s Day in 1985.

In 1966, Richard Speck killed eight nurses altogether in a townhouse in Chicago. He left behind only one nurse alive. The book describes the crimes as well as Speck’s trial where the surviving nurse confronts him.

Mark Putnam, a rookie FBI agent, got involved with his informant. What he never fathomed was how this relationship could end in murder.

The murder of Danny Hansford and the odd folks on Savannah, Georgia in the 1980s are recounted in the non-fiction novel by Berendt.

Fred and Rose West, Britain’s most infamous killer couple, killed and tortured people in the boarding house they owned. Their children were among their victims, too.

Theresa Knorr, a mother, used the help of her sons to torture and eventually murder her own daughters.

In the mid-1980s, Richard Ramirez, a Satanist, terrorized California and murdered 13 people. He avoided capture for a whole year before the police caught up with him. His horrifying crimes are documented in detail in this gripping read.

In 1954, Dr. Sam Sheppard was accused of murdering his wife. He was convicted and spent a decade in prison before a second trial ensued where he was acquitted.

During the Chicago World’s Fair in 1893, H. H. Holmes murdered multiple people in what he called his “murder house”.

Brothers Dan and Ron Lafferty, members of an isolated Mormon Fundamentalist community, were convinces that God chose them to murder a woman alongside her baby daughter.

Preston and investigative journalist, Spezi, teamed up to catch the infamous Monster of Florence. After capturing the suspected serial killer, they find themselves in hot waters.

In 1924 in Chicago, a child was murdered by two wealthy college students. The only motive they had was the thrill of it all.

Three-year-old Saville Kent was murdered in 1860. The investigation documented has one suspect: a family member.

In 1999, the Columbine events took place leaving behind a scary template for school shooter for two decades. Cullen who was one of the first on the scene recounts the incidents of that day.

In 2000, Lucie Blackman disappeared in Tokyo. The incident was covered by Richard Lloyd Parry, an award-winning foreign correspondent. The search led to the capture of a man who earned the title of “extremely evil” by the judge.

The search for the Long Island serial killer who began his targeted killing in 2010 is documented by investigative reporter Kolker. He only kills escorts.

Charlie Cullen also dubbed “The Angel of Death” is a killer nurse who is behind the death of 300 patients.

Smuttynose, an isolated island, saw the murder of two women. Louis Wagner was tried and convicted but was he really the murderer?

A biography of a killer whose time was spent in prison after he murdered his wife in 1986. He battled his own case and freedom, triumphantly proving his innocence.

These gripping stories written by award winning authors are far better than any bedtime read you have laid eyes upon yet. From biographies of convicted killers to first-hand account of survivors of serial killers, this list of the best true crime novels in the past 50 years will ultimately hook you.