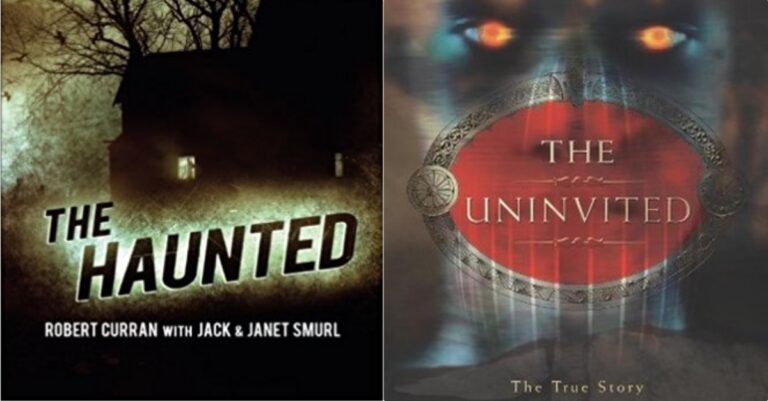 At times, all of us just want to sit down, relax and enjoy a silly horror film. However, it is not so silly when you find out that it was “based on a true story”. For most of us, those five words are enough to send a cold shudder down our spines. The fascinating part about most horror movies that are based on true events is that they were adapted from books. So why not get a real dose of horror from the original source itself?

From haunted abodes to tales of demonic possession, this collection of books is chock-full of haunting and terrifying experiences. Regardless of how well adapted onto a movie screen they may be, nothing quite says horrifying like a chilling story of survivors of wayward spirits. If you are on the lookout for a terrific scare, this list of scary non-fiction novels based on real paranormal cases will chill you to the bone.

The Haunted: One Family’s Nightmare

The famous incident of the Smurl family haunting is what led to the creation on this book. During the 70’s and 80’s, the Smurl family raised claims that a demon besieged them in their house for 10 years. After seeking the help of paranormal experts, clergy members and local authorities, they finally turned to Ed and Lorraine Warren – famed paranormal investigators hunters. Robert Curran pens down the accounts of physical and emotional abuse that the Smurl family endured during that period of time. Curran additionally aided in penning the script for the made-for-TV movie “The Haunted” based on the book.

Hostage to the Devil

To those of you who watched the Netflix documentary “Cross to Bear”, this name will be very familiar. It was based on Malachi Martin, a Catholic priest experienced in exorcisms and a prolific demonology writer. In the 60’s, Martin moved to New York from Ireland. During his career, he authored 17 books out of which this title remains the most haunting. It speaks of multiple exorcisms in between the 60’s and the 70’s. The book stands as a slap in the face for the Hollywood versions of exorcism as well as the effect it has on those who are afflicted by possessions.

More of a journal than a novel, this book is a documented collection of tales by Colin Dickey. He recounts all the haunted places he visited, in the part memoir, part travel guide and part ghost story book. In the book, the author also connects contexts of supernatural occurrences with the social implications upon which they were built. His mission was to travel the United States in search of the most haunted locations and venture unto their mysterious and dark pasts. Given that this book exists, one can say he succeeded.

The Demonologist: The Extraordinary Career of Ed & Lorraine Warren

Famous paranormal investigators and hunters, Ed and Lorraine Warren are increasingly popular in James Wan horror movies in fighting demons. The Warrens are the ones behind the unveiling of horrifying tales such as the Enfield Poltergeist and the Amityville Haunting. This book sheds light on many of the Warren’s cases, paying attention to their focus and reliance on religion. as they investigated the most famous hauntings of the late 20th century.

The Myrtles Plantation: The True Story of America’s Most Haunted House

A stately home in Louisiana happens to possess a sinister reputation. The Myrtles Plantation haunts, alike multiple American haunts, can be dated back to a dark past. According to rumors, the plantation as constructed over an Indian burial ground. To say the least, the blood spilled on those lands during ears of slavery haven’t dried up yet. The plantation has witnessed a slew of ghosts, multiple deathsand paranormal presences that haunt the grounds. The book ventures upon the horrific history of the lands in addition to the sightings during the plantation’s tenure as a bed and breakfast.

Deliver Us from Evil: A New York City Cop Investigates the Supernatural

A film adaptation of this book was released in in 2014 starring Eric Bana. Ralph Sarchie was a devout Roman Catholic and a 17-year veteran of the NYPD. He specialized in investigating crimes that he claimed were a result of demonic possessions. Also a practicing demonologist, during his exorcisms Sarchie made use of a supposed relic of the True Cross. Sarchie refers to his experiences and encounters as “the Work” of removing demons and ghosts from the world.

The scariest movie of all time is indeed based on a true story. Although the book is a fictitious work, it is definitely based on the haunting real-life exorcism of a 14-year-old boy from St. Louis, Roland Doe. Apparently, in the 1940’s Doe slipped under the control of demonic forces. The details of Doe’s real-life exorcist were put to use by Blatty and reframed to account event of a mother and daughter residing in Georgetown – fighting to save their souls.

The Uninvited: The True Story of the Union Screaming House

A survivor of demonic hauntings, LaChance recounts his experiences of survival with his children in Missouri. In the early 2000s, the family fell victim to multiple relentless demonic entities. They moved into an old home which used to be a butcher’ shop on Cedar Street in Union, Missouri. The realtor warned them that there was something off about the house but they moved in anyway. Soon after they found themselves besieged by creatures they could not see. Horrifying screams tore through the air, furniture moved around and religious iconography hung around the house was mysteriously defaced. The screaming was terrifying to the degree that their home earned the title of Union Screaming House. LaChance tells a tale of horror experienced by his family as well as the tenant’s that succeeded them at the Union House.

Ghosts: A Natural History: 500 Years of Hunting for Proof

For those interested in the history of hauntings from the perspective of a skeptic and an explorer, then this is the right book for you. Over 500 years of wayward spirits’ stories are tracked by Clarke inclusive of the occult’s tales and hauntings. Most of these ghost stories lack a logical explanation. The famous historical characters that make appearances in Clarke’s hunts may surprise you.

Nothing quite beats true real-life terror. Likewise, the finest way to experience such horror in its most naked and raw form is via books and manuscripts. Hopefully, you will glean as much delight from reading these book as we did when compiling them.