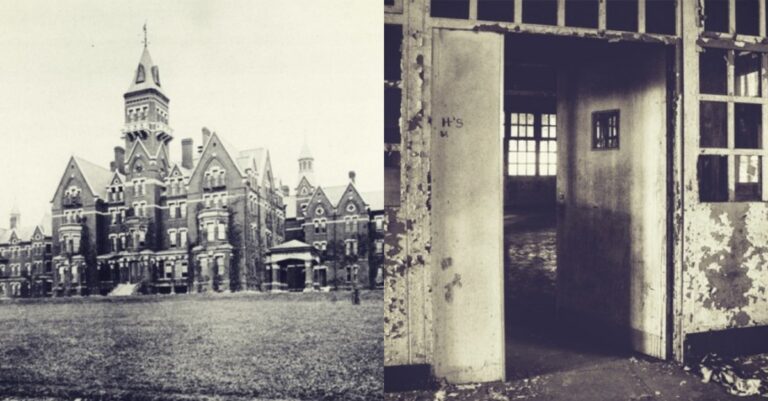 All across the US, mental asylums and vacant hospitals lay abandoned – the relics of a disastrous mental health care system. The rotting structures within share brutal and cruel histories starting with the ice pick lobotomies to the torture, neglect and in some cases even murder. It does not come as a surprise that the most haunted hospitals and insane asylums are also a hub for some of the most haunting paranormal activity.

These five notorious insane asylums and derelict hospitals lie lost and forgotten as the souls of the past take refuge within.

Built in 1910, Waverly Hills Sanatorium was expanded 14 years later as an isolation hospital when it accepted tuberculosis patients. It was not long before rumors regarding the mistreatment of patients and cruel human experiments ran rounds. Reports emerged of bloody surgeries involving opening chest cavities to replace lungs with balloons and removing ribs to ease the process. It was also firmly believed that about 64,000 patients of Waverly Hills died due to the staff’s overuse use of the “death tunnel” or “body chute”. The chute was connected to a room under the ground which stored bodies before cremation. Most the body chute and morgue is intact up until today.

Not surprisingly, Waverly Hills makes the top most notorious place for paranormal activity on this list. A young boy named Timmy’s apparitions are among the known hauntings of the place. He likes to play with rubber balls. Room 502 is haunted by a nurse who hung herself. The same room is shared by the ghost of another nurse who fell its window. Scattered screams and eerie footsteps can be heard regularly, echoing down the abandoned hallways.

Margaret Schilling a patient at Athens Mental Hospital, now known as The Ridges, went missing in 1978. The hospital and its ground were thoroughly searched by the staff and her body eventually was found on the top floor of ward no. 20. Schilling was naked and her clothes were in a neat folded pile by her side. The body was removed but a stain remained in its place, marking where the body lay undisturbed for days. The stain can be seen even today, as can her ghost, which is rumored to roam the empty hospital. Considering the dark and long history of the institution, it is not uncommon for Margaret and the many other to haunt its grounds.

Built in 1874, Athens Mental Hospital quickly earned a grisly reputation for the abuse and mistreatment and abuse of patients. They were restrained on a regular basis for days at a stretch, beaten by the staff and even left in crowded rooms. In 1993, when the hospital finally shut down, 2,000 graves of former patients lined the surrounding grounds. Instead of a name, the headstones simply read a number.

Originally named Pennhurst Home for the Feeble Minded and Epileptic, the institution was built in 1908. Shortly after it was renamed to Pennhurst State School and Hospital. Soon, the institution was pressured into accepting immigrants, orphans and criminals who wouldn’t be accepted anywhere else. This led to extreme overcrowding as well as staff shortages which in turn began a long and abusive cycle of torture and even murder. The staff would drug patients, chain them up in bed and abandon them for days at an end while having them strapped to gurneys. In 1968, Pennhurst was brought to national scrutiny when the feature ‘Suffer the Little Children’ was released by NBC. Despite the suffering portrayed, it wasn’t until 1986 that Pennhurst finally shut down for good. The abandoned ruins still have personal equipment and medical equipment scattered about.

Open to tourists as a haunted attraction now, Pennhurst attracts a slew of visitors for being one of the most haunted hospitals and insane asylums. Sightings of shadows in the hallways and reports of cries and screams of former patients often resound in the building. The Quaker Building hosts the most noteworthy paranormal activity: the ghost of a little girl scratches visitors with unseen hands and shadows stalk you from the darkness.

The Rolling Hills Asylum was built in 1827 and was formerly known as the Genesee County Poor House. It was designed as a home to society’s outcasts inclusive of drunkards, handicapped, paupers, lunatics, widows, murderers, orphans and vagrants. As many as 1,700 patients passed away within the asylum during its years in operation. It is rumored that this figure is not inclusive of the hundreds of others buried in unmarked graves all around the site. This would explain the flurry of paranormal reported. From slamming doors, disembodied voices and mysterious footsteps to full body apparitions, the abnormal is seen and experienced on a regular basis.

Roy Crouse is the most famous spirit to haunt the hallways of Rolling Hills. Almost seven and a half feet tall, Crouse passed away in 1942 at the age of 52 after spending his entire life in the institution. Today, his former room is haunted by his gigantic shadow as he roams around. The East Wing’s second-floor corridor is commonly referred to as the Shadow Hallway due to the high number of paranormal appearances seen as shadow figures walking through walls and crawling across the floor.

Designed to house 600 people, by 1939 the institution had over 2,000 patients. Danvers State Lunatic Asylum’s other name is “birthplace of the prefrontal lobotomy” due to its use and refinement of the procedure. It was first performed in 1936 by the physician Walter Freeman. Patients were often neglected and staff shortages were not uncommon. By the 1960s, reports arose of unattended patients aimlessly wandering about and even dying alone in isolated parts of the hospital left to rot for days. By 1969, the hospital began shutting down and in 1992 it was fully closed for good. The building lay abandoned and empty for years. However, in 2005, the hospital was purchased with plans of turning it into luxury apartments for $12 million.

Most of the original building was demolished during reconstruction leaving behind only two wards and the center building. By 2008, the construction finished and residents began to move in. Then the paranormal activity began. Residents and visitors report seeing full body apparitions, hearing sounds of unaccounted footsteps, seeing flickering lights and doors opening and closing all on their own. Some have even experienced tugging at clothes, hair pulling and scratching down their backs.

This list of most haunted hospitals and insane asylums in the US is grisly due to the history of these institutions. One would wonder what kind of a life would be led by a human version of an experiment gone wrong. It is even more alarming that the spirits of these unrested souls still wander the earth and their previous abodes.