Freaked DISCOVER THE ART OF PUBLISHING
Home Places Haunted The Most Haunted Schools In The U.S. 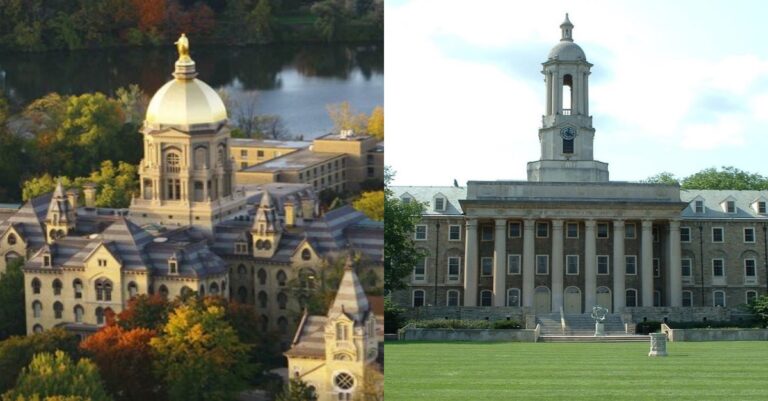 School is already back in session and students are already wishing summer was back and they were relaxing by the beach. Instead, they’re hunkering down at night and spending countless hours doing homework and staying up at all hours of the night trying to get a good study session in. But, they could be also encountering a few ghosts roaming the halls.

At least every school in the United States has rumors that some part of the school is haunted and that if people go there then they will see ghosts for sure. However, 13 universities have skyrocketed past rumors and have been deemed as schools that have some of the most paranormal activity a school has seen. Ranging from demonic possessions to star-crossed lovers to tragic accidents to Civil war era grudges, these schools have seen it all and have been deemed extremely haunted. 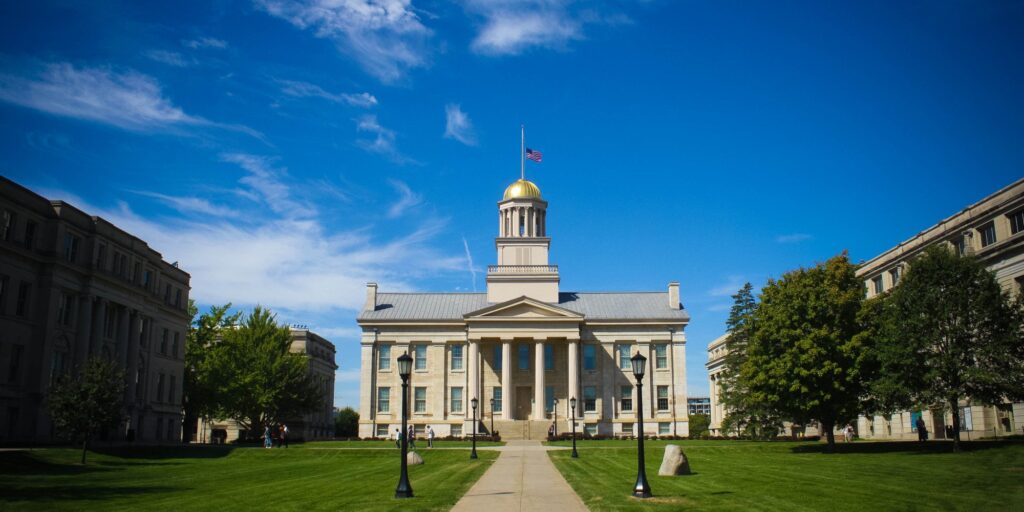 The University of Iowa.

In Iowa City, Iowa, the legend of a suicide pact is the heart of all hauntings at this particular university. According to the legend, three female students were having a conversation about their boyfriends in their shared dorm at Currier Hall and eventually realized they were all dating the same guy. After realizing this, they all made a pact to commit suicide together. Now, these three spirits appear in Currier Hall whenever there’s an argument amongst other students and if you’re up late at night and living in this hall, you might be able to hear the disembody voices of these three females. 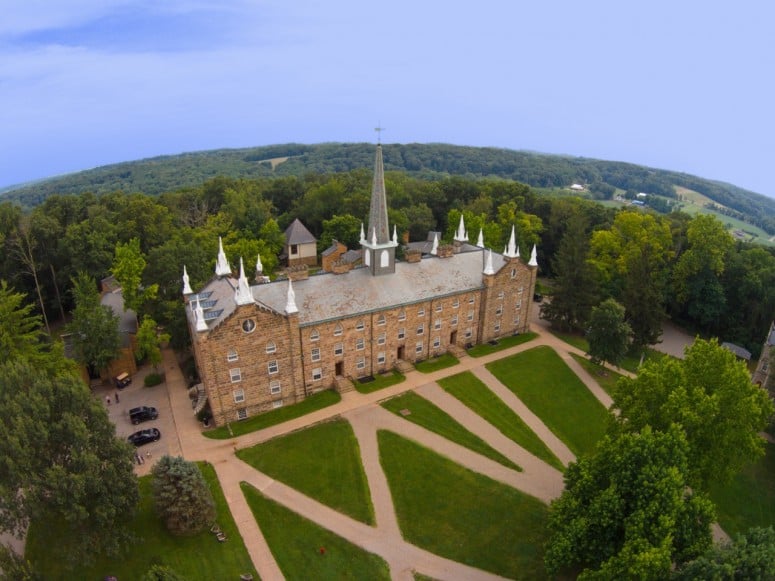 An areal shot of Kenyon University.

Located in Gambier, Ohio, the south entrance to Kenyon College has been renamed as “The Gates of Hell”. Rumor has it if you walk through these gates at midnight while the bells of the Church of the Holy Spirit sound off, you’ll be sent to the fires of Hades. No one really knows where this rumor came from, but historians who have investigated it tie it to the deaths of nine students who tragically passed away in a dorm fire in 1949. 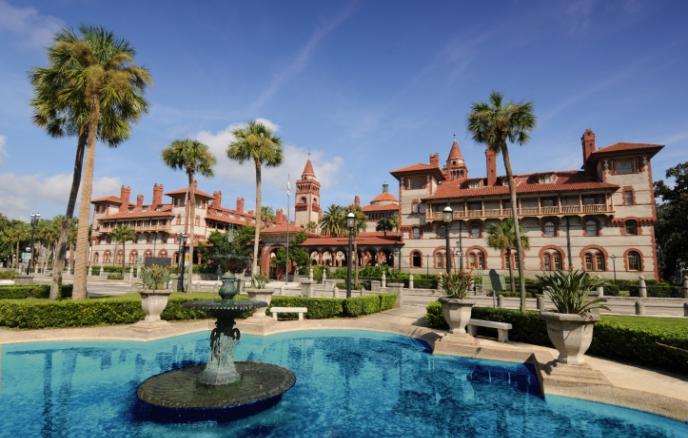 Flagler College is located in St. Augustine, Florida, which is the oldest city in the United States and one of the most haunted locations ever. Practically everywhere you walk is haunted and it came to no surprise that this college is haunted as well. The building in the center of the campus used to be Hotel de Ponce de Leon and was designed by Henry Flagler, who had a colorful personal life. His first wife passed away, his second wife went to a mental institution, and his third wife passed away under mysterious circumstances. At his funeral, he demanded that all the doors and windows were to remain open of the Hotel de Ponce de Leon, but during the service someone actually closed them and made students and other visitors believe that his spirit is trapped there with no escape. 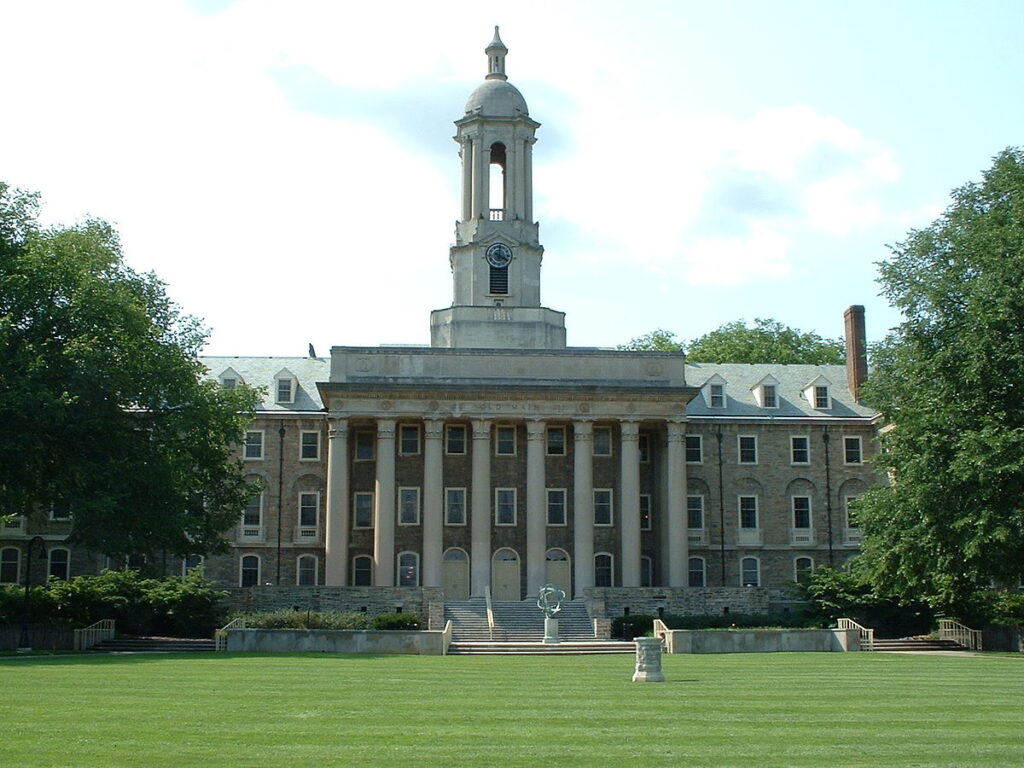 State College, Pennsylvania is home to the state university that is supposedly haunted. Even though dozens of ghosts have been reported by faculty and students, one of the most infamous ghosts that are at this university is Betsy Aardsma, who was tragically murdered in the library. On November 28th, 1969, Aardsma was studying peacefully in the library when she was stabbed a single time in her chest. Her murder case was never solved and now students claim to see her roaming around the stacks of the books throughout the library. 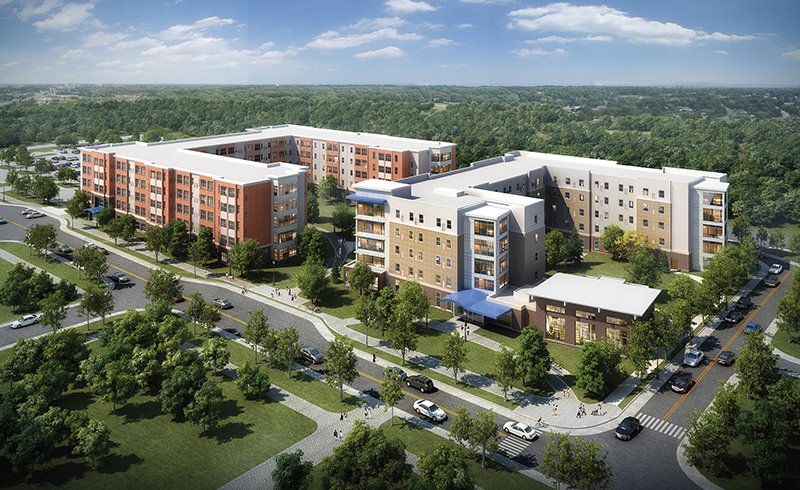 In Augusta, Georgia, this university is just a short drive from Walker Cemetery, the oldest family plots in Georgia, and has been known to have some of its own strange phenomena happening throughout its halls. Bellevue Hall seems to be the focal point of paranormal activity as a few students reports. Emily Galt lived there in 1861, etched her name in one of the buildings windows, and committed suicide after she found out her soon-to-be-husband died during the Civil War. Students report they hear arguments in the middle of the night and hear footsteps following them when the hallway is empty. 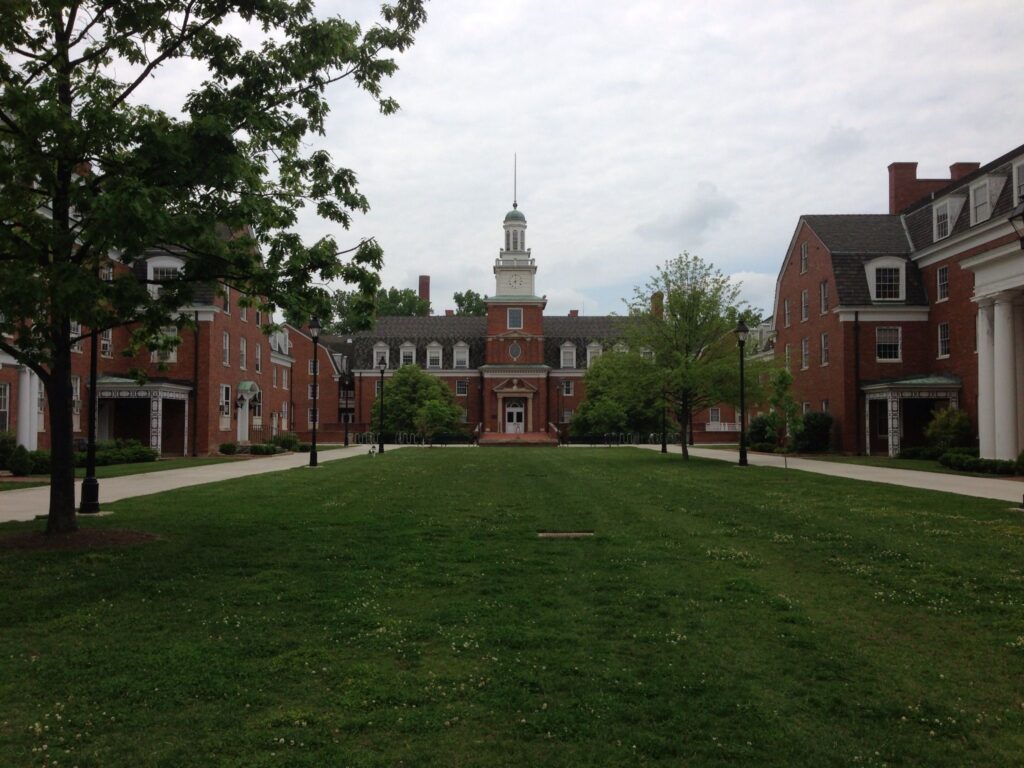 A few buildings at Ohio University.

In Athens, Ohio, Ohio University is one creepy place. It is rumored that if you draw a line between the five cemeteries that run along the university, the lines form a pentagram. Students report that every single building of the university has at least one ghost in them while Washington Hall has a whole basketball team. That legend goes that a visiting basketball team had such a good time at the college, that when they all died in a horrific car accident on their way home, they just returned to the university and stayed there. Students report that they have seen the entire football team standing in the corridor connecting Washington and Read Hall in their full uniforms.

Chicago Illinois is home to Loyola University, a university that has an incredible amount of paranormal activity. During the 1870’s, according to the legend, a nun and a priest were employed by the university and had a torrid love affair. When the nun became pregnant, she feared being exposed and ultimately took her own life. The priest was the one to find her body and upon doing so, he committed suicide as well. Students have since reported seeing a glowing light emanating from one particular window while others have seen a hanging figure from the same window. Others report that they hear a man sobbing and screaming from empty rooms. 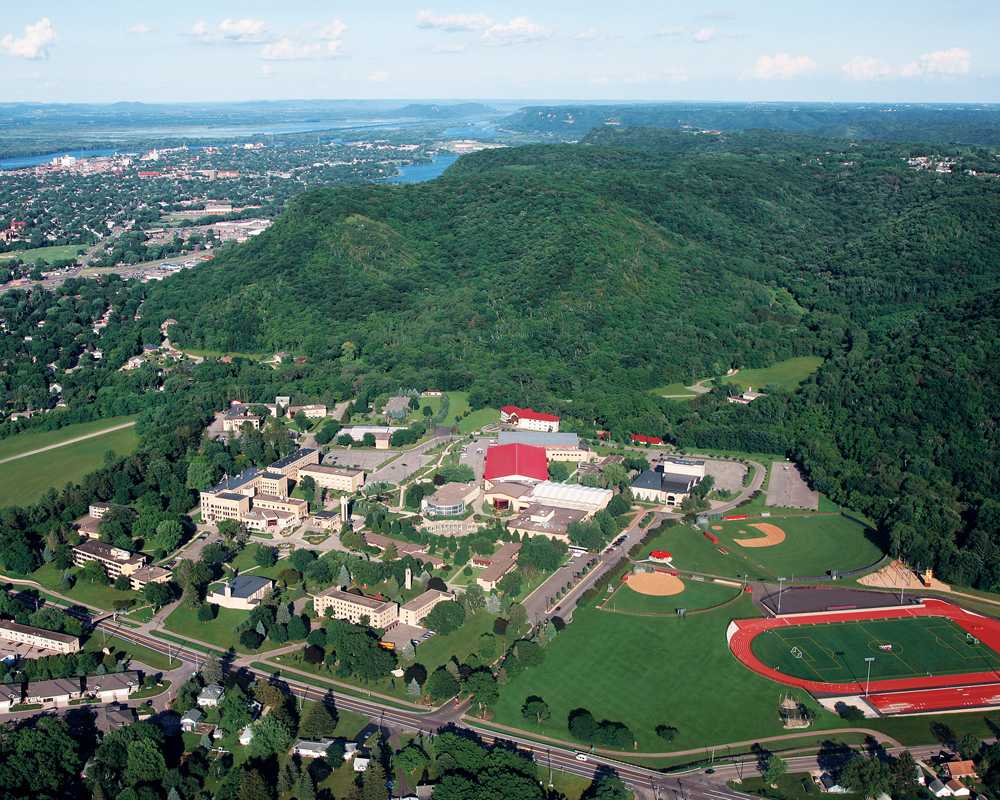 Located in Winona, Minnesota, Saint Mary’s has a dark history. In 1915, Father Louis Lesches tried to murder his boss, Bishop Patrick Heffron- the man that Heffron Hall is named after. Louis died in prison at the age of 84, but students believe that he is still haunting Heffron Hall. They report that they hear footsteps with the sound of a cane hitting the floor in the hall while others report not being able to go into rooms because they were stopped by a strange force. The activity has been so intense throughout the years that parapsychologists were brought in to research the building. Their results were inconclusive, but students still continue to report on hearing Lesches roaming around the hall.

Areal shot of the campus.

Urbana-Champaign, Illinois is home to the states university and students continuously report they are being terrorized by a girl who had drowned in a swimming pool that used to be located where the English Department is located today. The young woman has been reported to be staring out the third floor window as well as roaming around the halls throughout the day and night. There are other spirits in this school, though, including: the spirit of the faceless man who has been spotted near Lincoln Hall, peering out his windows. There is a rumor that if you encounter the faceless man, than you’re going to have an unfortunate end. One student, who apparently saw the ghost, later hung himself in his dorm.

10. Saint Mary Of The Woods College 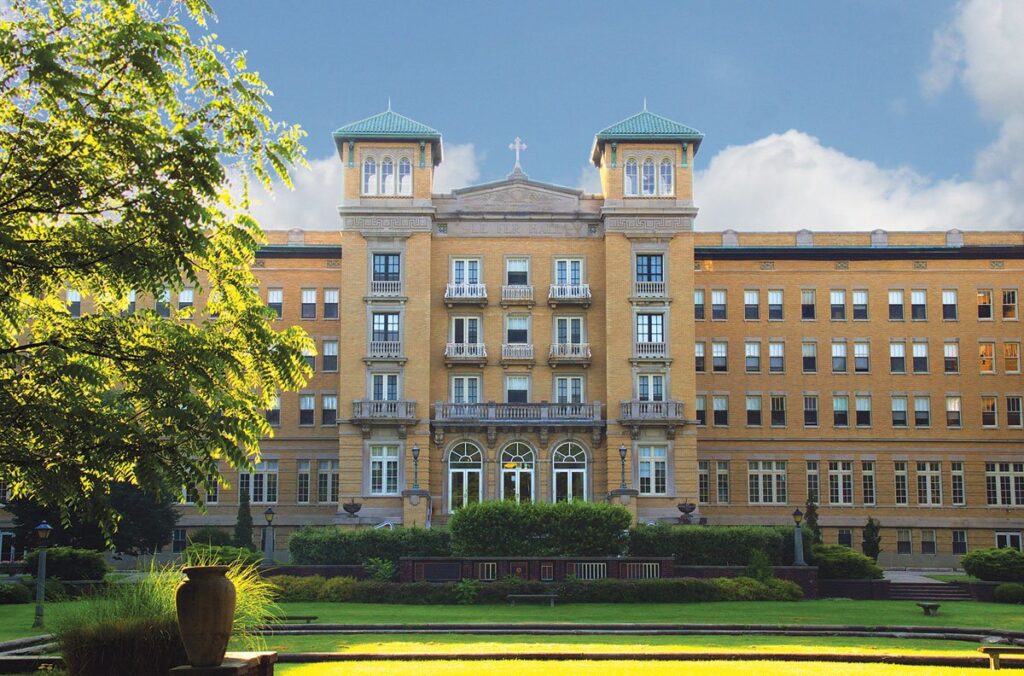 One of the buildings at this Catholic University.

In West Terre-Haute, Indiana, this Catholic university is homage to a terrifying figure known as the faceless nun. The former nun used to live in now Foley Hall and she was a talented portrait painter and she always left the face of her subjects last. She finally painted a self-portrait, but soon fell ill and died before completing the piece. Students and staff have since reported that they have come face-to-face with this faceless nun when the hallways are entirely empty. Foley Hall burned down in 1989, but the paranormal activity, like piano’s playing by themselves, are still reported to this day.

Areal shot of a few buildings of the Notre Dame University.

Notre Dame, Indiana is home to one of the most haunted universities in the U.S. Even though a copious amount of ghosts live here, one famous ghost is George “The Gipper” Gipp. He was the universities football star and he sadly fell ill with pneumonia at the age of 25 back in 1920. The Gipper reportedly hauntes Washington Hall, one of his dorms, and is known to be a friendly ghost who is known to pat undergrads on the back. Other students have reported that they have seen him peering over other students’ shoulders before disappearing all together. 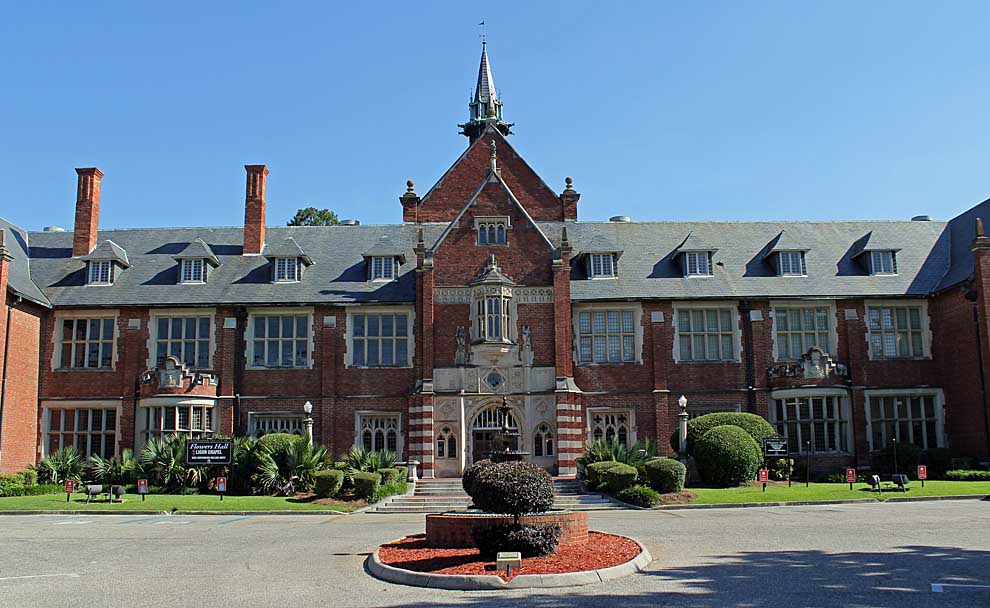 In Montgomery, Alabama you’ll find Huntingdon College, where the ghost of a girl named Martha haunts the campus. Martha, who had a predilection for the color red, was a sullen, lonely girl, and reportedly told her roommate they would be “sorry” when she moved to another room. She later committed suicide and her spirit now glows red and haunts Pratt Hall. Martha, however, is the second Red Lady at Huntingdon College. The first Red Lady was seen when it was located in Tuskegee at the end of the 1800’s where a woman dressed in scarlet red could be seen wandering the halls. People speculate that woman followed the college to Montgomery and possessed Martha, allowing her to continue to roam the halls. 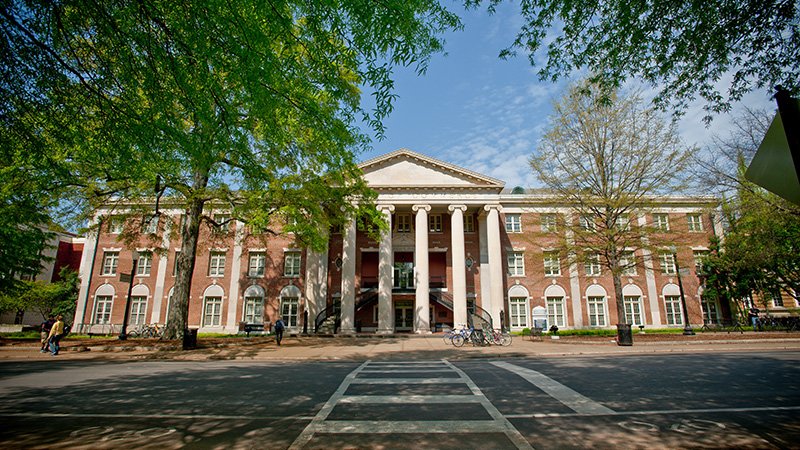 One of the buildings at the University of Alabama.

Tuscaloosa, Alabama is home to the state’s university and has been haunted for a while. In 1868, a short while after the construction was completed for Woods Hall two male students allegedly dueled on top of one of the top floor balconies. The victor of the duel shot the other student, who fell seven stories to his death. Ever since that occurrence, students have reported seeing his spirit wander the halls and the balcony. The Little Red Round House building on campus was home to some Confederate trickery during the Civil War- Union soldiers were led to the building to find some whiskey but were instead killed by a Confederate shooter. Students have reported they have seen men dressed in Union uniforms wandering the halls and believe they are still trying to find the whiskey they were promised.

There are other schools out there that have some type of paranormal activity, but these schools are some of the most haunted schools in the United States. Be careful if you attend or visit one of these schools, you never know who you’re going to run into.