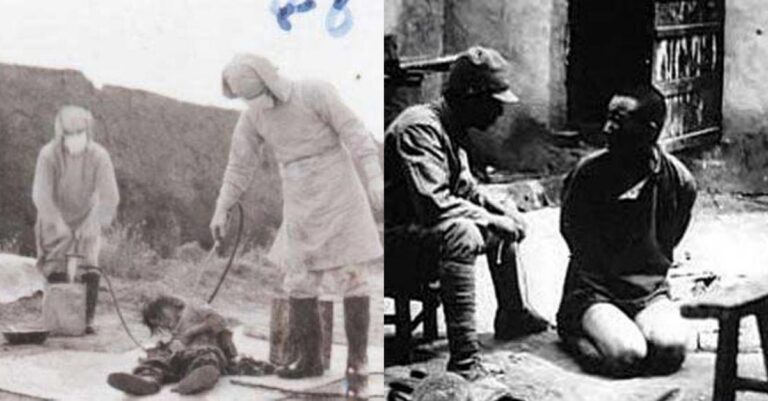 The three things that first come to mind when thinking of World War II are atrocity, destruction and suffering. Auschwitz and the concentration camps are perhaps the most striking impression left behind by the war. However, what most people are unaware of is the fact that Japan had its own version of Auschwitz. They called it Unit 731 Experimentation Camp.

Believe it or not, this underground camp was worse than the ones unearthed in Europe. According to research, 200,000 people died there. The gruesome experiments carried out left no survivors behind to tell the tale.

A Reality To Put All Horror Movies To Shame

Located on Chinese territory that was occupied by the Japanese during the war, it is in Harbin, Manchukuo. Over 150 buildings were occupied by Unit 731. They experimented and researched the purpose of biological weapons as well as their effects – on the human body. Their study subjects were live humans. The bubonic plague, anthrax, cholera, tuberculosis and typhoid was tested on the subjects.

A common practice was the vivisection: dissecting a human body without the use of anesthesia while the subject was still alive. This was done to see the effects of the virus on the organs in raw form as anesthesia was believed to hamper the process. However, the experiments were not carried out for the sole purpose of science. Many of the acts conducted were simply to see how much pain the human body could take before collapsing.

Sea water injections, lethal x-rays and revolving centrifuges with humans placed inside were all examples of the atrocities carried out. Basically, the sole purpose that Unit 731 appeared to have was to discover the most gruesome and abhorrent ways to kill a human.

The Angel Number & An Apology That Never Came

Ironically enough, the number 731 is believed to be the Angel Number in numerology. It indicates that everything happens for good and is channeled by divine intervention. Whether the number was chosen on purpose or not, the fact remains that Unit 731 was launched under the pretext that the research was being conducted for the greater good.

The Chinese people never received their due apology – an incident that happened with the Holocaust when the Germans apologized to the Jews. China did sue Japan and it won yet Japan never admitted to the horrors that took place in Unit 731. This could explain the series of extraordinary events that take place in that region. It appears like the souls have never really rested, even in death.

From disembodied voices to objects moving on their own, many reports have arrived of strange activity in Unit 731. The place is riddled with an air of sorrow and sickness that most visitors cannot visit. The place is open for visitors but some places are still sealed off entirely. One such place is the “frostbite research area”. In that experiment, subjects were frozen to death. From afar, many people have noted seeing human reflections in the windows, chilling sounds of heavy breathing and human figures appearing in the mist.

Ghost hunters and paranormal investigators rate the area among the top 10 most haunted places in the whole world. Lately, a BBC team went to Unit 731 to film some footage and they encountered problems. Their batteries drained inexplicably and all the lights went off.

If you are adventurous enough and want to take a visit there, make sure to have a guide with you. It is important to explicitly follow their instructions and not wander off. A lot of investigators have noted that the paranormal activity in the place increases in the passage of time. Perhaps a formal apology could put the troubled souls to rest. But, the greater the delay for the seemingly never occurring apology, the more useless it is. It appears as if there is no sign of forgiveness.