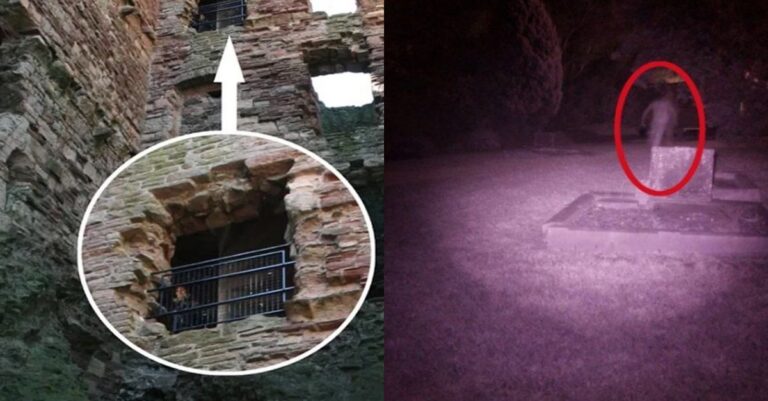 In all ages and cultures, the spirit world is recognized and respected. Even if one cannot physically witness paranormal apparitions, many people still remain convinced that paranormal entities exist and that we must not mess with them. However, what happens when the spirit world collides with the human word? If you are not a believer in the paranormal, then the following series of 25 shockingly convincing photographs might change your mind.

Taken at the Scottish Castle in May 2008, the photo shows a man in period costume looking out from a barred window. Three photographic experts confirmed that no special effects were used to doctor the picture.

The following image was captured inside Sefton Church in England in 1999. The photographer stated that only one other person was inside the church at the time but he was standing on the other side of the building. Many people believe that the apparition witnessed is that of a former church minister.

In Sunnyvale, California, during a paranormal investigation for the TV show “That’s Incredible”, at a Toys R’ Us, this infra-red photograph was taken. During the entire night-long vigil, the man in the background leaning against the shelves was not witnessed with the naked eye. Other pictures taken at the same time but with high-speed film captured no traces of him.

Taken in Egypt, this photograph dates back to WWII. It shows a group of drinking buddies in a joyous gathering – only that they are accompanied by a translucent gentleman in the back.

Ghost on the Beach

On the water’s edge, a mysterious dark hooded figure can be seen. Skeptics’ explain that the figure is simply an illusion created by an indentation in the rock face. Or is it?

He’s Right Behind You

In 1997, during a family picnic, Denise Russell took a photo of her grandmother shortly before she passed away. At first, the man standing behind her grandmother went unnoticed. It was not until years later that he was recognized as Denise’s grandfather who had died in 1987 – ten years before the picture was snapped.

Ghost In The Car Mirror

A car’s wing mirror shows a ghostly face apparition. The photographer confirms that no one else was around at that time and no account of who it was at the driver’s seat exists.

In the 80s, this picture of an unsuspecting tourist at the Grand Canyon was taken. A tall “man” in a cloak can be witnessed standing directly behind the tourist who is standing unnervingly close to the edge.

The Myrtle Plantation house is thought to house at least 12 ghosts with Chloe being the most famous of all – the spirit captured in the photograph. According to legend, Chloe was a slave who was brutally killed after she poisoned Woodruff’s wife and two young daughters.

In Stockport, UK, during a ghost hunt in an abandoned hospital, Jamie-Leigh Brown, paranormal investigator, captured what seems to be a doctor’s ghostly figure in one of the hallways. Brown reviewed her film reel only after the ghost hunt was cut short because her group fled once they started hearing strange footsteps issuing from the empty floor above.

In Caergwrle, Wales, on Packhorse Bridge, multiple ghosts are believed to dwell seeing how the bridge was the only entrance to a former burial spot. This photo was captured by members of the Cheshire Paranormal Society

The following picture was snapped in the currently abandoned Allen County Tuberculosis Hospital in Ohio. All the other photos taken during the visit do not show any evidence of paranormal activity.

This photograph is thought to have been taken in the 1950’s. It shows two mechanics hard at work, accompanied by a third man who is staring at the engine.

Photographer Glenn Shelton claimed to have captured on camera a real Alcatraz spirit. He says that this image is proof that Alcatraz is indeed the” Most Haunted Federal Prison” around the world.

The Monk of St. Mary’s Guildhall

In 1985, in the 14th-century venue which had once also been used as a prison, during a meeting of the Masons, this eerie photograph was snapped. A tall figure in robes can be seen in the corner. Over 100 Masons attended that night and no one reported a robe-clad individual.

The Figure in The Underbrush

In Toowoomba, Australia, a man was hiking in a remote forest when he stopped by a watering hole to rest. He felt uneasy as if he were being watched so he snapped pictures of the surrounding forest and continued on his way. Only after coming back did he look through the pictures and found an apparition staring right at him from the underbrush. He later found out that the area was famous for suicides.

This baby’s picture was taken a few weeks after his grandfather had passed away. One day the kid crawled into grandpa’s favorite chair and the mother promptly snapped a photo only to realize later that the grandfather had made a surprise appearance.

While strolling late night in Lewistown, Pennsylvania, this photograph was snapped of two ghostly shadows lurking behind trees.

Dan Clifford, café owner of Curiosteaz Tearoom in Scotland, was under the impression that he had a nighttime intruder. So, he checked his security camera for suspicious activity. Looks like he found it.

In Bolton, England, the security camera video taken from Ye Olde Man and Scythe shows a flickering ghostly figure. The manager, Tony Dooley, was the one who discovered the footage one morning. “I came down and saw a glass smashed on the floor, so I was instantly suspicious and went to check the CCTV and found it has stopped working.”

In 2015, on Halloween night, members of the Sydney South West Paranormal Investigators (SSWPI) were investigating St. Bartholomew’s Cemetery in West Sydney. While snapping pictures, the heard strange whining sounds. Examining the photos later revealed the ghostly image of a man running away from the investigator near one of the gravestones.

In northern France, this photo of Neuville-St Vaast German war cemetery near Arras was captured by Mitch Glover. The pale ghost of a soldier can be seen. Glover’s mother said, “It looks like they are holding something in one arm. Whether it’s a rifle or something one friend said it looks like he’s stood on guard over them.”

This picture was taken in Newcastle Castle Keep during a Haunted City Tour around Newcastle, UK. It is obvious that there is a ghostly white figure which is attempting to descend the stairs.

Snapped at Garden Grove, Iowa, the above picture depicts the real spirit of a World War I soldier. A paranormal investigator participating in a ghost hunt at the inn took the picture.

Polly Gear, a member of the Mountaineer Paranormal group at Moundsville Prison, West Virginia, snapped the picture. This The prison dates back to 1866 and has housed some of the most dangerous criminals inclusive of Charles Manson. The gruesome history of the prison includes violence, suicide, executions and murders. It is also a hotspot for paranormal activity. When Polly took the picture she said she was alone in the room.

The stories of ghosts range from completely fabricated to chilling real ones. Over time it has been hard to distinguish between real stories and spun ones. However, with the proof of a camera capturing these otherworldly spirits, it is easier to make a distinction between reality and imagination.