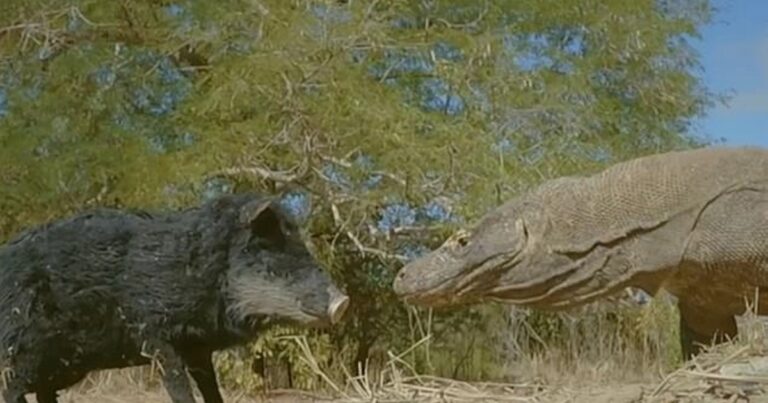 Animal documentaries have to rely on creative measures to get their footage. For David Tennant’s The Islands’ of Spy in the Wild 2, this involved the use of an animatronic spy pig. While the fake pig was able to get a lot of interesting footage, its demise is perhaps what it will be best known for. In a recent clip from the BBC-produced show, the pig came across a male Komodo dragon.

While the animal is relatively harmless from a distance, the spy pig got a bit too close. As the video highlights, the dragon was already quite aggressive. The main reason for this is that it was trying to mate with a female before it was interrupted by another male. This subsequently led to an altercation between the two males, before the loser was forced to run off.

While the spy pig caught this on camera, it got closer than it should have when doing so. As a result, it was then spotted by the amped-up Komodo dragon. Naturally, this went about as well as most people would think. A testosterone-filled dragon who just won a fight and was trying to get back to business perhaps isn’t going to be the nicest thing to come across.

The spy pig was subsequently attacked, which provides quite a first-person view of what it’s like to be attacked by the animal. Since the majority of people will take care to avoid this exact scenario, there are very few who know what the view actually looks like. The Islands’ of Spy in the Wild 2 shows just how terrifying it can be.

There are several other cameras capturing the action, so there is a range of angles of the Komodo dragon attack. However, it’s the view of inside the animal’s attack that provides the most terrifying visuals. Have a look below.