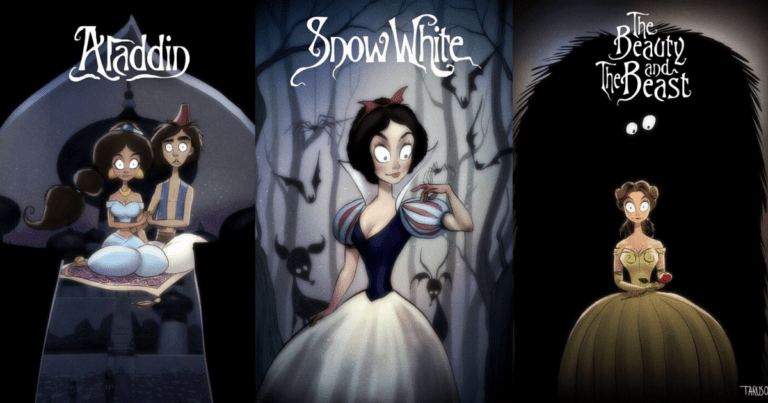 A lot of our favorite Disney stories, while vibrant and optimistic, are not immune to the dark possibilities of storytelling. From the unfortunate deaths of Bambi and Simba to Dumbo briefly undergoing slavery, these stories never shy away to depict very sensitive subject matters.

Much like the films of Tim Burton, whose gothic visuals complement its often somber narratives, classic Disney stories can get moody and if they are willing to go deeper, shockingly heart-wrenching as well.

This comparison resonates so much with the amazing artworks made by Russian artist Andrew Tarusov, who draws iconic Disney characters by reimagining them as characters from a Tim Burton film.

The illustrations, which Tarusov posted on his Facebook page, surprisingly offers a new element that we never get to see to some of our beloved Disney characters before.

Pinocchio looks like he was pulled straight out of The Nightmare Before Christmas or The Corpse Bride; Aladdin seems to have hypnotized Princess Jasmine while flying in the magic carpet; the dark and deep blue sea was terrifyingly depicted in Tarusov’s reimagining of The Little Mermaid; Dumbo never looked so controlled and weak; the opening scene of The Lion King was reimagined as a sketchy cult procedure in the making, and The Sleeping Beauty artwork appears to look like a scene of torture.

Tarusov also made the same treatment for the heroes of Disney’s Marvel, wherein characters like Wolverine and Iron Man looked uncanny to an Edward Scissorhands type loner.

And if that doesn’t disturb you enough, there’s also Spider-Man entangling a woman in his string of web.

Tarusov has revealed that he loves “how Burton’s style looks chic, cute, and vintage all at the same time. Although his work has been marketed as “horror” movies, they can transcend to any genre.”

“My goal is to make viewers have a fun time when they come across my work. It’s meant to be whimsical and playful.”

What are your thoughts on these Disney artworks from Andrew Tarusov? What other Disney stories do you want him to work on next? Share your reactions in the comments section below.