Freaked DISCOVER THE ART OF PUBLISHING
Home Animals Meet Zeus, A Blind Owl With The Universe In His Eyes 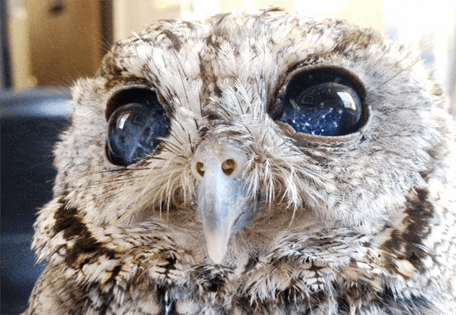 Incredibly enough, the blind Owl has eyes that strongly resemble the universe. The deep blue and black colors, combined with Zeus’ starry-eyes are powerful enough to mesmerize even the most emotionless people.

Zeus found its forever home at the Wildlife Learning Center where it resides to this day. The Western Screech Owl was named after the Greek god of sky and thunder, due to the beauty of its eyes.

In fact, the bird has been treated especially well and because of its blindness, there was no way he could be left in the wilderness, so he now, alongside his tree trunk, occupies the filing cabinet of Paul Hahn, the founder of Wildlife Learning Center.

If you aren’t so well brushed up on Owl facts, you should know that the birds rely strongly on their vision to survive, with their eyes making up between one and five percent of their complete body weight.

Hahn spoke about the Owl and claimed the center had never seen anything like it in his 40-plus-years of being in the industry. He also stated how Zeus hangs around with him in the office each day and is completely healthy.

Zeus has been in California as part of the Wildlife Learning Center since 2012.

Fans have been showing their love for Zeus over social media, as some are still in disbelief over his galaxy eyes and some ‘fangirling’ after meeting the famous Owl for the first time.

If you are obsessed with this Owl like we are but cannot find your way to California, you can follow the bird on Instagram and join the other 42,000+ in showing your support for Zeus.