Freaked DISCOVER THE ART OF PUBLISHING
Home Animals Meet The Fire Snail, The Slugs Version Of A Vampire 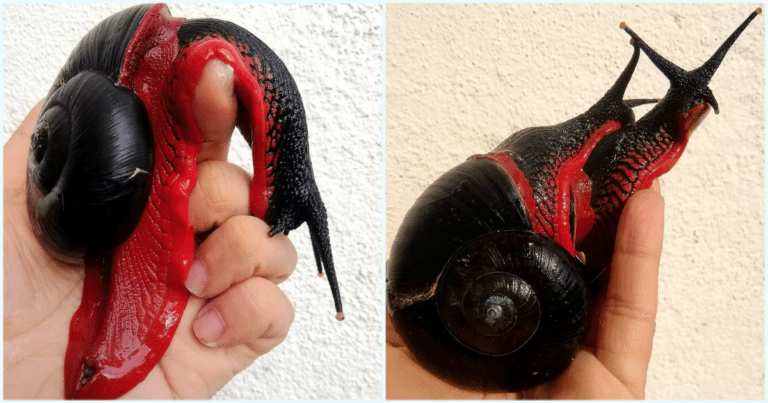 Snails are very rarely opted for as a pet and understandably why. They’re never very entertaining or interesting to look at, until now.

The Fire snail is like no other, its deep black and vibrant red colors make it look almost like a vampire, goth-type pet, opposed to the original boring colors they’re known for.

Natives of the cloud forest of the Cameron Highlands, the stunning Fire snail (Platymma tweediei) is arguably the largest endemic snail from the Peninsula Malaysia.

The species is fairly difficult to keep alive as it is supposed to live in very cool and humid temperatures if it is unable to do so, the snail would unfortunately die.

They can grow to an enormous 30 cm in length, making it one of the biggest snails currently known to man.

Fire snails, along with other species of snail, are often used in and alongside food, their secretion used in cosmetics, and even their shells are used in jewelry and decorative objects.

Sadly, these snails can only be found in certain kinds of forests that aid their ability to live. They are extremely hard to keep alive in captivity and while they’re able to survive in cloud forests, just 1% of the world’s forests are inhabitable for them.

Tourism, logging, and agriculture have been hitting the Cameron Highlands hard over the past century, and between the years of 1947 to 1997, Cameron Highlands lost around a third of its forests, with the number said to have increased since then.

There is no exact number placed on how many Fire snails are wandering around throughout the world, but due to their specific way of living and the destruction of their most common living quarters, extinction may not be so far away.

Are you in awe at these snails beauty? Let us know your thoughts in the comments.