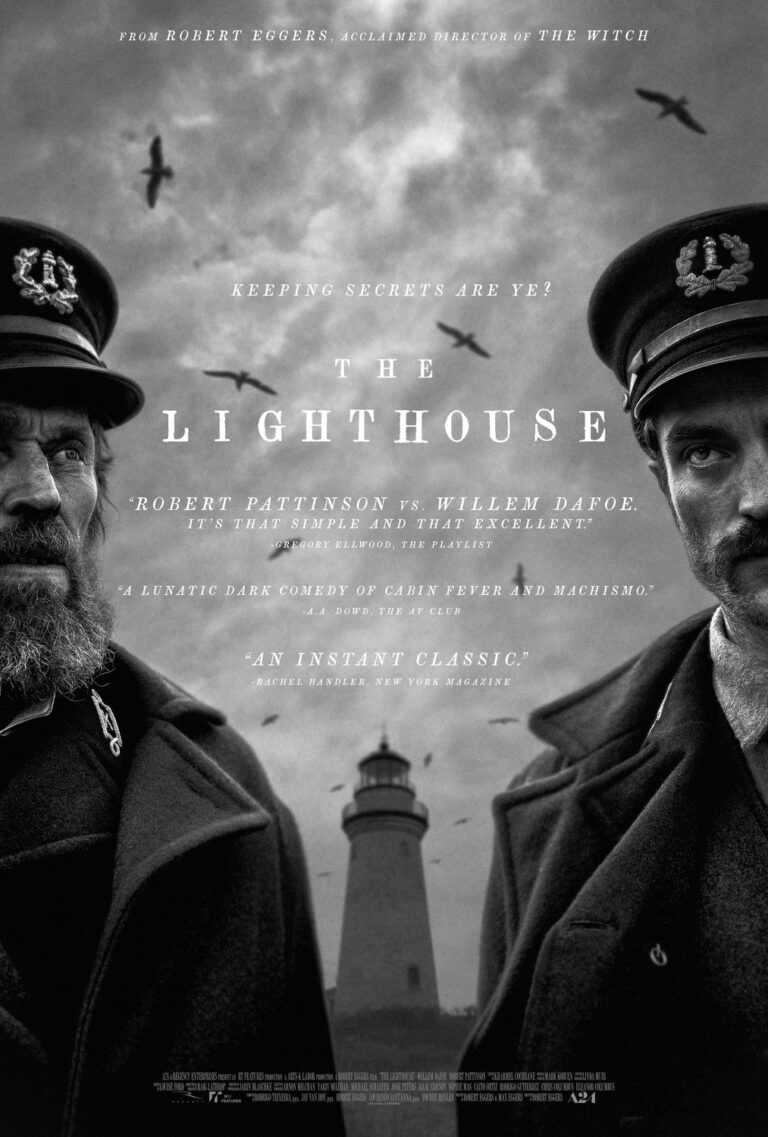 Whenever a horror movie gets five star reviews in the mainstream press, it’s time to sit up and pay attention.

When that film also happens to also be the second film from Robert Eggers it’s time to see it ASAFP (the ‘F’ standing for ‘feasibly’…honest).

For those who saw Egger’s directorial debut The Witch, it will come as no surprise that his follow up film The Lighthouse is a slow burning affair more reliant on atmosphere and a sense of dread than special effects and jump scares.

And yet for all its belligerent idiosyncrasy The Lighthouse emerges from the fog of its black and white colouring and salt crusted literary dialogue, as one of the most beautifully paced, masterfully delivered and genuinely affecting horror movies of the year.

Starring a resurgent Willem Dafoe and a brilliantly twitchy Robert Pattinson, whose performance here might well earn him an Oscar nomination, not to mention a measure of forgiveness from horror fans scarred by his crimes against vampires in Twilight (though that will be a long time coming from me Pattinson. Mark my words) this is a film as brilliantly acted as it is well written and directed. Always a plus.

With the choice to shoot in monochrome adding to the film’s sense of claustrophobic cabin (or in this case lighthouse) fever, Egger’s latest offering has already drawn comparisons to the work of Kubrik and Hitchcock. Esteemed company to be sure, but in no way feint praise. The Lighthouse lives up to the hype.

Playing on the same vein of nautical Gothic plumbed by the likes of Poe and Melville, not to mention the former’s explorations of madness and the darker side of the psyche, the story revolves around two men assigned to a four week stint of duty as ‘wickies’ at a lighthouse on a remote island.

With the proximity, the elements and each man’s internal and (possibly) imagined demons cranking up the tension, the film ratchets up the pressure to a fever pitch as the men’s relationship and their sanity begins to fray.

The dialogue is peppered with sea worn dialect and shot through with a dark acerbic humour ( saying someone smells like ‘curdled foreskin’ is an insult for the ages that will definitely be added to my repertoire. I’ll save that one for the next time Nana comes round) that offers some relief from the general doom of the film’s overall aesthetic, but don’t get used to it. In this film, the gloom is most definitely coming and a few laughs will not save you.

That the film never drags despite each character’s Shakespeareque soliloquies is a testament to Eggers’ pacing and talent as a writer. Sequences that blur the lines between dream and reality only add to the sense of confusion and give a fascinating and disturbing portrait of parallel descents into madness.

In keeping with my tradition of giving five word rather than five star reviews I’ll sum the film up thus : Nautical Gothic sophomore effort shines.

The movie will be available on Amazon on the 20th December.

See it as soon as… Here is the trailer,