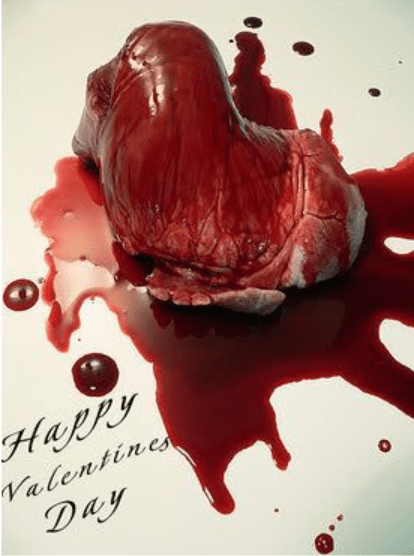 Whilst the saccharine consumerist confection that is Valentine’s Day is certainly not to every horror fan’s taste “If I see one more pink heart I swear I’m going to vomit” being a common phrase around this ‘special’ time of year, it is undeniable that the true sentiments underpinning it touch even the blackest of horror hearts, ( In the words of Count Dracula “Yes, I too can love”).

It is also undeniable that ‘love’ stories have played a huge part in the horror genre over the years, from the creepily parental protectiveness of Hanibal Lecter towards Clarice Starling to the bubbling homo eroticism of Le Stadt’s relationship with Louie.

So, in order to ensure that those seeking to hide in the shadows whilst the whole world goes ‘Hallmark’ for the day can still get a taste of love’s sweet kiss we’ve selected some of horror cinema’s best delightfully dark love stories.

Obsessive scientist becomes the victim of his own experiments. That his journalist lover is able to peer through the brilliantly nauseating effects to see the thing she loved inside is a brilliantly tragic vision of true love and the notion that love is blind. Though being a fly old Jeff should be anything but blind, having more lenses than the whole cast and crew put together, but still…

Despite the false advertising of the title, this version of Dracula being about as faithful to Stoker’s novel as Tiger Woods is to…well….anyone and despite featuring a performance from Keanu Reeves so wooden they could simply have driven him through the Count’s heart and saved on stakes, this elaborate and visually intoxicating version of the fabled Count shows a softer side to old Drac as we see him not only motivated by his bloodlust but by a longing for a lost love, long dead.

As forlorn as he is befanged, Gary Oldman’s Count  weaves an unlikely but effective little love story into the typical vampire tale.

An American Werewolf in London

My personal favourite and the film that features the best werewolf transformation scene in movie history (It does. Yes it is.  No arguments. Fight me.) many forget that beneath the black comedy, effective frights and flying fur, this John Landis classic also features a love story, with the ill fated relationship between the unfortunate David and his nurse Alex being brought to a dramatic and heart wrenching finale in the film’s closing moments: a single transition from snarl to recognition saying more than a whole shelf of soppy cards ever could . Now that’s love.

And if you still think that all that lovely dovey nonsense is for the birds, you could always track down  the audiobook version of Stephen King’s ‘Cycle of The Werewolf’ and skip to the entry for ‘February’. Valentines indeed.

What are your favourite horror movie love stories? Let us know in the comments below.