London’s Highgate Cemetery opened in 1839 and was a fashionable place for the living and the dead. The way that this cemetery was designed and set up was during the Victorian era and made visitors fall in love with the lush greenery and winding cemetery paths. Novelist George Eliot, poet Christina Rossetti, and economist Karl Marx found this place to be their eternal home because of how tranquil and peaceful the cemetery really was. It didn’t make them feel threatened or in danger or creeped out like most cemeteries do, they felt at peace with their inner selves when they were there. But soon, the eternal home soon had its tranquility taken away. 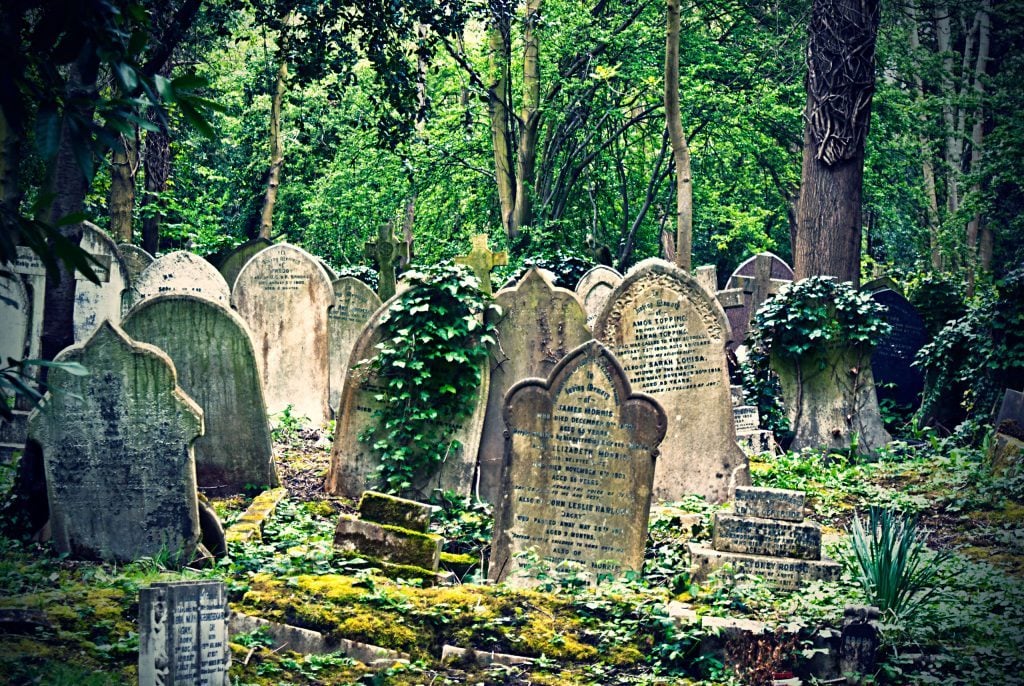 When the 20th century came into light, Highgate was over flooding with bodies. When World War II was underway, Germany bombed London and when this devastating attack happened, several volts in Highgate were destroyed, leaving them to be remain open. In 1960, Highgate was perceived as an eyesore to the public because of how devastating it looked: its lush greenery was no longer present, the cemetery started to look like it was falling apart because of the open vaults from the war and because no one really kept up with it, and various other things. Because of how rundown the cemetery was, instead of remaining a place where people could go if they needed peace of mind, it became home to drug abusers, runaways, vandals, and outcasts.

A newspaper article about the Highgate Vampire. 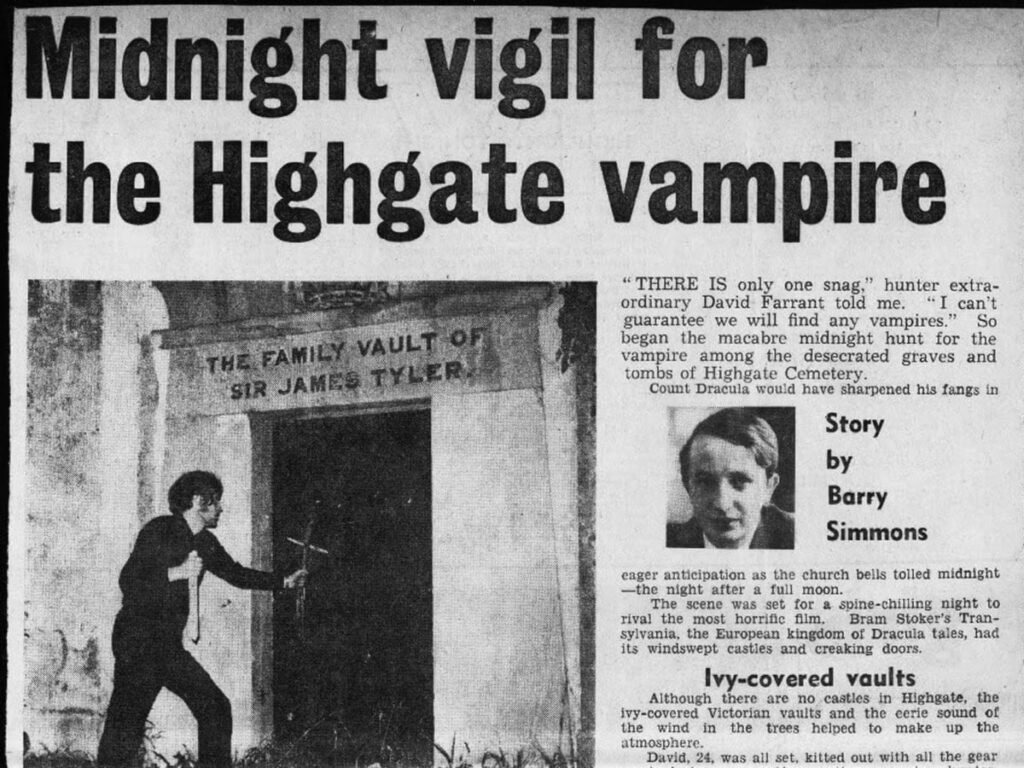 Sneaking into Highgate Cemetery was the thing to do during 1970’s- and the best time to do it was at night. Because there was so much negativity surrounding the once peaceful place, rumors started to spread throughout the town that Highgate was home to people that believed in Satanism and performed occult activities. One strange and unsettling experience that happened at Highgate was when an elderly woman was visiting a relative’s grave and noticed that she was being followed on several separate occasions by strange people. She exclaimed that they would follow her but would never once speak a word to her, and she heavily believed that they were doing some type of strange ceremonies in the cemetery. 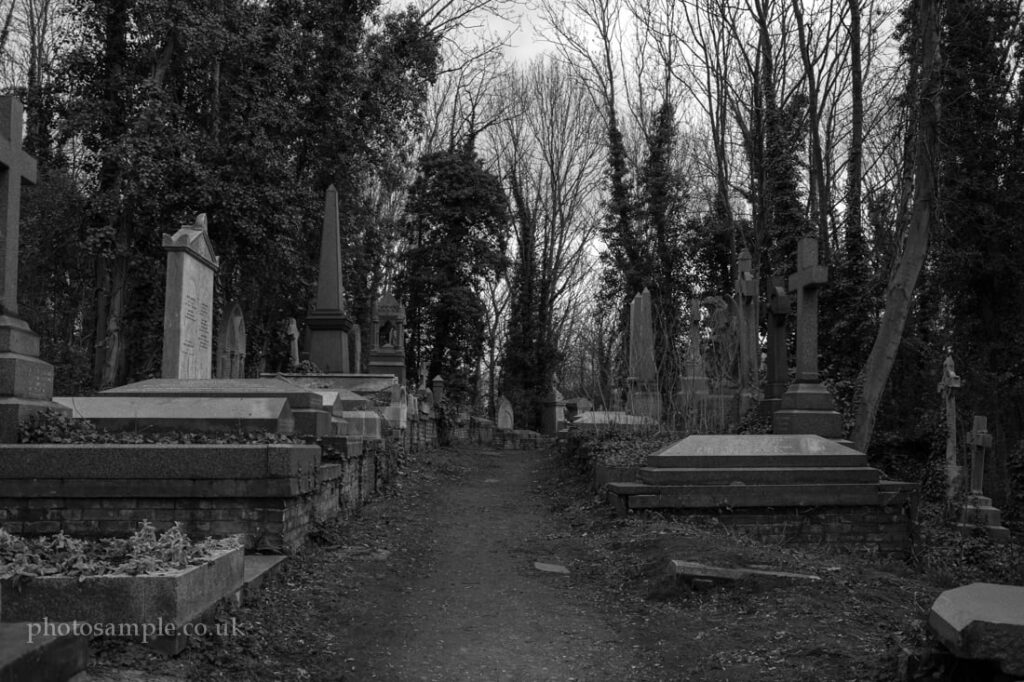 Two men who were clearly interested in the occult became two of Highgate’s regular trespassers. David Farrant and Sean Manchester were deemed to be the chief voices of the Highgate mystery. Manchester was proclaimed to be a self-style vampire hunter and became presided over the British Occult Society and ended up being the founder of the Vampire Research Society. On the other hand, Farrant was said to be a wiccan and mystic, and he personally established the British Psychic and Occult Society.

A photo of one of the walkways through the cemetery. 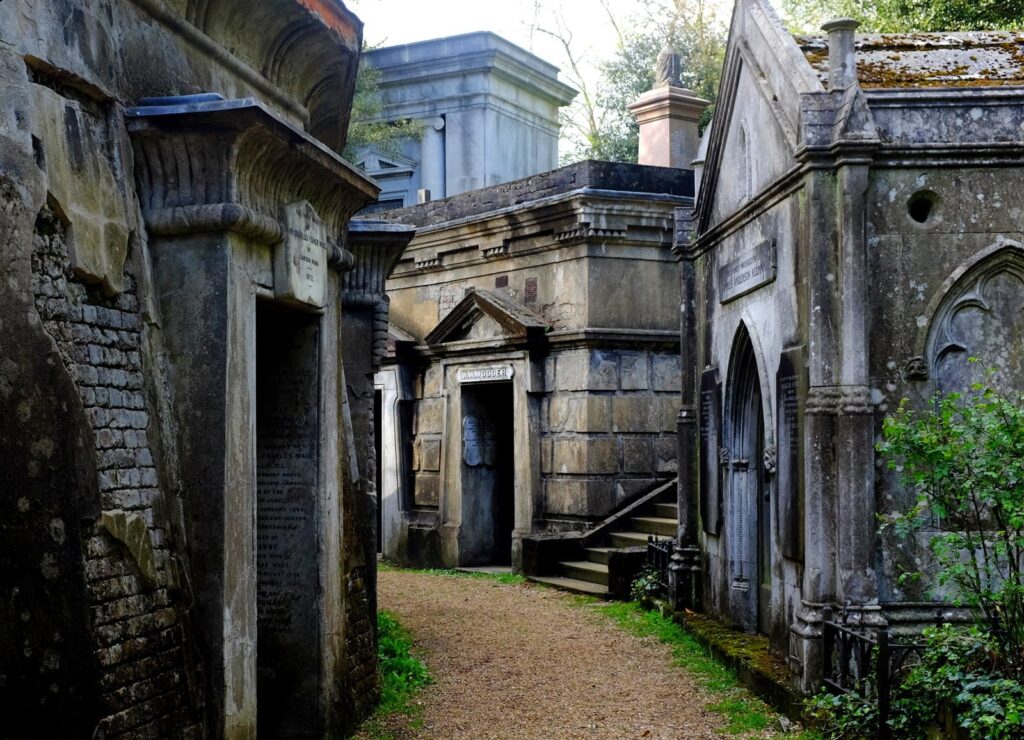 As people continued to trespass in Highgate, the authorities had a hard time stopping them. But, if you were to ask the residents, they believed that people weren’t actually to blame for all of the vandalism and destruction that happened at the cemetery. People started to report that they would see a shadowy figure move around and through Highgate Cemetery, making them feel uneasy about what was actually going on in there. The British Occult Society received two separate claims from people who single handily witnessed this shadowy figure, both saying that this shadowy dark figure they saw were creepy and paralyzed them for a short time.

The Circle of Lebanon, located in West Cemetery, Highgate Cemetery. 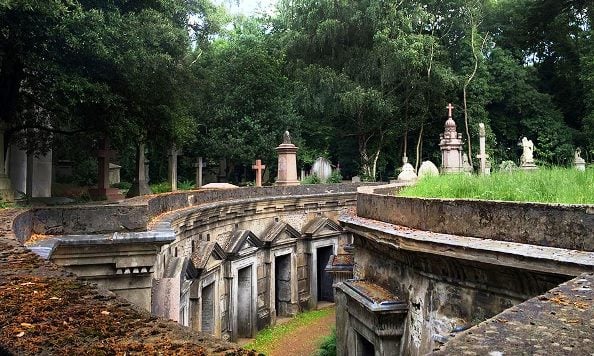 On December 21, 1969, after hearing countless reports of this shadowy figure roaming around Highgate, Farrant decided to spend the night there to try to capture any type of activity. His purpose and mission were to debunk all of the claims about this apparition and had the mind set that people were just seeing things in the dark. When midnight struck, Farrant walked up to the front gates and while he was looking through them, he saw a tall dark figure roaming around and in between gravestones. When the figure was getting closer to him, he was shocked to discover that this figure was just about seven feet tall. When people asked him about what he saw, he recalled that he saw two inhuman eyes at the top of the head. Farrant became overwhelmed with fear, he quickly turned away from the figure and when he turned back around to see if the figure was still there, it had vanished.

One of the beautiful walkways that exhibit some gravestones. 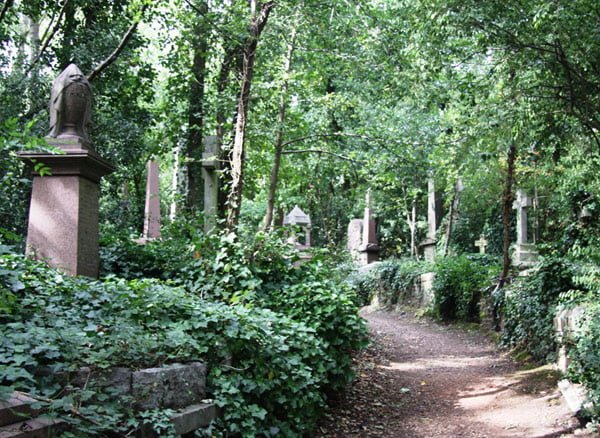 Over the next few days, Farrant wrote a letter to the Hampstead and Highgate Express to see if there were any other unusual experiences that had occurred at Highgate. Then, responses started to pour in and most consisted of people claiming they saw a dark shadowy figure over the past seven years. Other people reported that there was a tall man with a hat that walked across Swains Lane, a street that runs through the middle of the cemetery, and as they watched him walk across the street, he would just vanish into the cemetery wall. Others say that the bells would start to ring inside of the cemetery chapel as the man with the hat passed through the wall.

An old newspaper reporting on the Highgate Vampire.

A short while after Farrant sent out the letter, people started to find fox carcasses and other animal carcasses near the Highgate cemetery. Further examinations of the bodies revealed that the blood from their bodies was completely drained and there were throat lacerations. After all of these reports and the carcasses showing up, people started to speculate that Highgate had a vampire- a vampire that was considered Royal according to Manchester. When Manchester caught wind of what was going on, he wrote to the Hampstead and Highgate Express and informed them that the strange dark man that everyone was seeing was the King Vampire of the Undead from Wallachia. He proceeded to say that he personally believed that this Royal vampire was once a medieval nobleman who dabbled in black magic and that followers of him used a coffin to smuggle the vampire king into England during the 18th century. Manchester concluded that he was finally laid to rest in Highgate Cemetery, until someone decided to summon him one night, which disturbed him from his eternal sleep.

The Hampstead and Highgate Express, where Manchester and Farrant reporting to, writing about the foxes found near the cemetery. 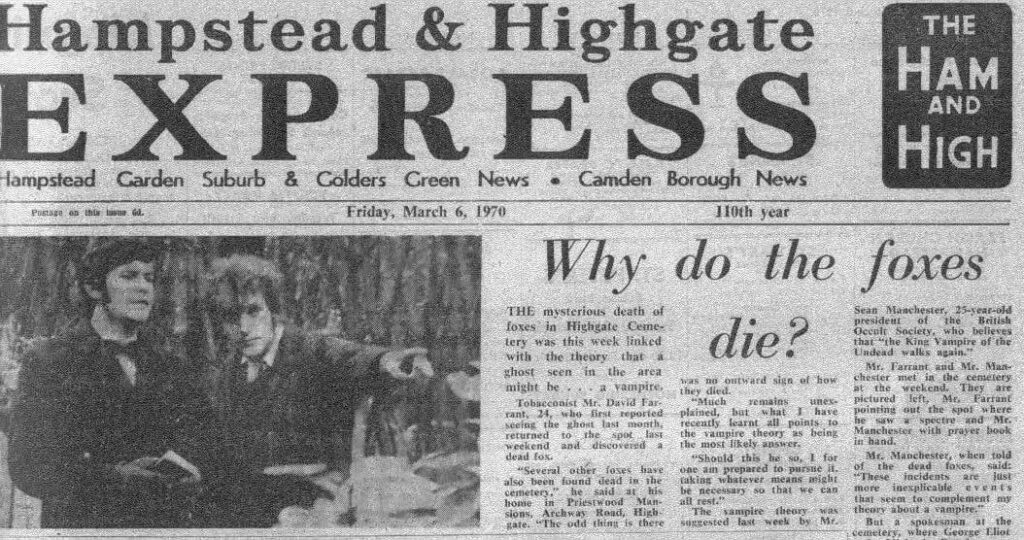 Due to the letter that Manchester sent in, the Highgate Vampire became a prominent figure in the public eye. The public was completely energized by this tale and it was the talk of the town. When the press started to interview Farrant and Manchester, they amped up the town more with tales of this so called vampire and grew to be completely competitive with one another as press interviews continued. During one interview with ITV news, Manchester and Farrant continuously dared each other to host a vampire hunt and finally, it was decided there was going to be a hunt on night of Friday the 13th.

People participating in the vampire hunt. 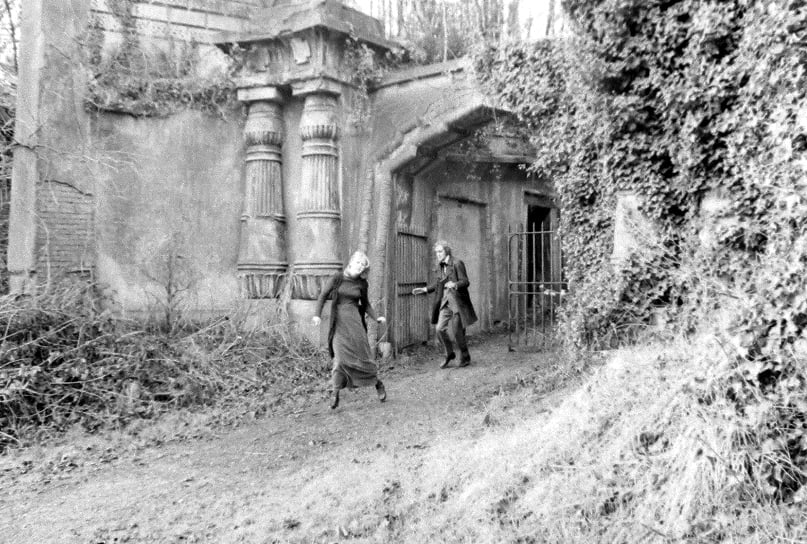 With word getting out that there was going to be a vampire hunt at Highgate Cemetery, journalists and television crews awaited anxiously at the gates of Highgate. Onlookers soon gravitated towards the gate as well as would-be vampire hunters, eagerly waiting to see the outcome of the vampire hunt. Police tried to contain the crowd and keep them under control, but soon the crowd started to pour over the gates and walls of the cemetery where people eagerly sprinted through the cemetery to find the vampire. At the end of the hunt, there was no vampire that had been caught, however, people who took part in the hunt claimed that they did see a dark shadowy figure lurking in the cemetery.

More gravestones in the cemetery. 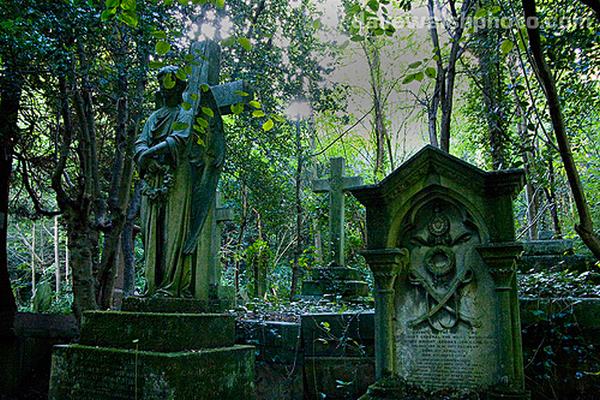 Throughout the rest of the 1970’s, Farrant and Manchester continued their paranormal investigations of Highgate Cemetery and never once gave up on the thought that there was a vampire somewhere in there. Farrant was unfortunately arrested one night when police arrived at the cemetery and saw Farrant with a crucifix and wooden stake. The relationship between Farrant and Manchester was dissolving by the second, the two never agreeing on anything and having their own personal beliefs and views about the cemetery. They both claimed that the other was a fraud and soon there were constant proposals of fighting each other to the death over the accusations they made against one another. Manchester released his own account about the Highgate and called it The Highgate Vampire, in which Farrant responded with his own account and called it Beyond the Highgate Vampire.

The actual entrance to Highgate Cemetery. 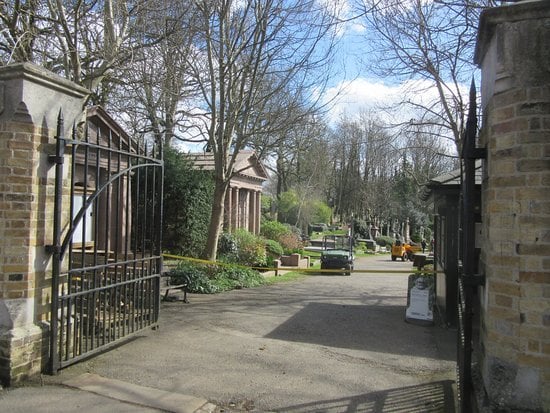 Thanks to Manchester and Farrant, Highgate Cemetery gained a lot of media attention it didn’t really have before and started to benefit from it. In the year 1975, the Friends of Highgate Cemetery Trust was established, both sections of the cemetery had been acquired by the year 1981, and they have been maintained by the Trust community. As the years went on, it was announced in 2013 that the West Cemetery was only accessible by an hour-long guided tour and this tour even allowed tourists and visitors access to the East Cemetery. The only difference between the East and West Cemetery was that the East Cemetery can be toured either alone or with the guide. However, if you are thinking of touring this vampire infested cemetery, either West or East Cemetery, you must purchase a ticket. 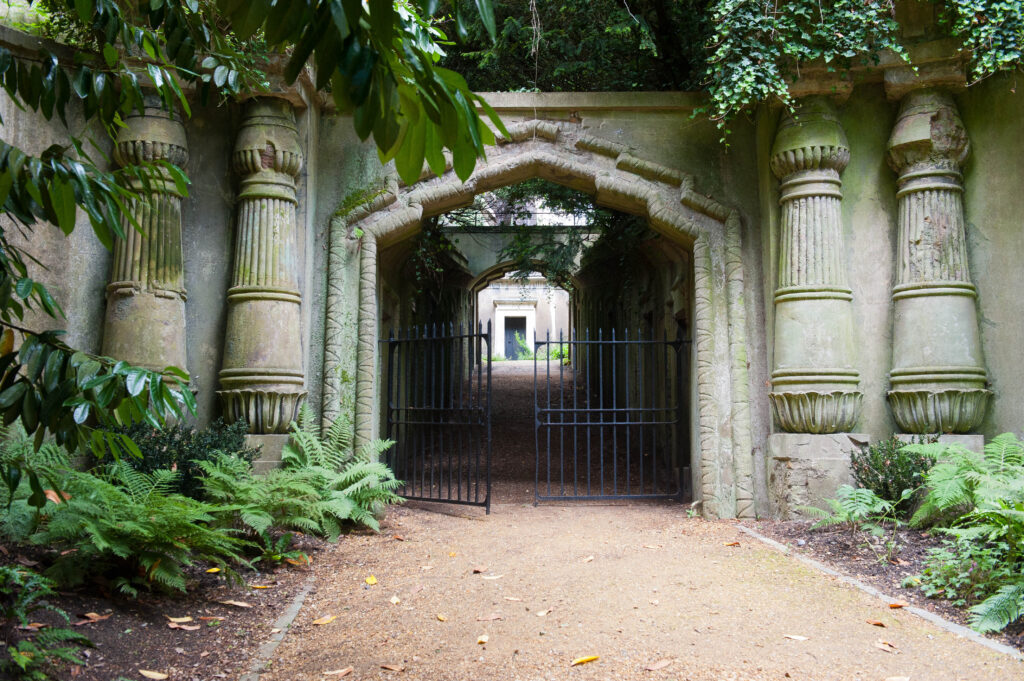