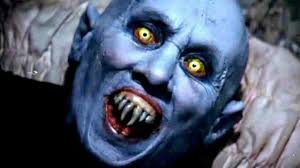 I’d like to preface what I’m about to say by explaining that I might be a little bit excited by this news so, please bear that in mind as I say. “F*** yes! Take my money, take it now”! Ahem…sorry about that, but this is a pretty big deal.

Elsewhere on this site is an article detailing how a number of respected horror authors were interviewed recently to share the novels and stories that scared them. Only one book made that list twice. Salem’s Lot. A novel that scared the scarers.

The very same Salem’s Lot that dripped from the pen of horror god Stephen King and which scared the bejeezus out of a generation in its TV mini-series adaptation. The same Salem’s Lot that, praise be, is about to get a new big screen adaptation from non other than Jame’s Wan and Gary Dauberman, the same Wan and Dauberman who brought you The Conjuring series. Oh happy day.

That this novel, a novel which to my mind almost single handedly gave vampires their bite back, wrestling the undead back from the brink of farce, is getting a new adaptation is great news. That it is this particular team that will be taking on the task makes me positively giddy. Their handling of The Conjuring series has been fantastic and has treated horror fans to that rarest of rare beasts- genuinely creepy moments. With subject matter this rich, the hope is that this could be something special indeed.

Salem’s Lot, adapted from an earlier short story into a full length novel, explores what would happen if, rather than landing in Whitby and making his way to Carfax in London, Dracula (or an equivalent Lord of the Undead named Mr Barlow) had chosen small town America as his hunting ground.

With a plot bristling with well drawn characters, unforgettable scenes and a truly haunting antagonist this adaptation has the potential, if handled well, to be a classic.

Now I’m off to find my Stephen King calendar so I can start counting down the days.