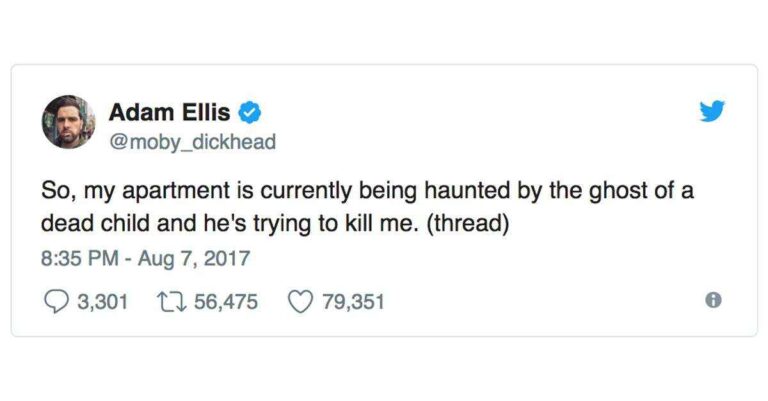 Just about everyone who is a citizen of the internet is aware of the viral “Dear David” Twitter thread. The whole ordeal began as a nightmare for Adam Ellis, NYC-based artist, and has since transformed into a real-life haunting by a little boy named David. Ellis documented the hauntings via a Twitter thread which he appropriately titled as “Dear David.”

On 7th August, Ellis first began tweeting about his interactions with David. He expressed that he was feeling threatened by a disfigured young boy.

So, my apartment is currently being haunted by the ghost of a dead child and he's trying to kill me. (thread)

What is going on? pic.twitter.com/30mLSqYhXo

And here we go. Just minutes before midnight. pic.twitter.com/vZ7MGCumpu

Soon, he started noticing odd activities such as photos turning dark in well-lit rooms, his cats’ reactions and moving rocking chairs. In his first videos, Ellis’ cats can be seen ogling at the door and sniffing it. Given how animals tend to witness the paranormal, this was solid evidence that a ghostly presence existed in Ellis’ apartment.

Ellis then started noticing polaroids taken in well-lit rooms were coming out black and he even filmed the photography session to give his viewers sufficient proof.

Ok, one last thing cause I wanted to double check. Here's a couple video of me taking photos: pic.twitter.com/JFtqJqdiaE

And then the hallway: pic.twitter.com/C4creSBjvO

Not long after, Ellis decided to install a nanny cam in the apartment. The cam caught the rocking chair moving all on its own.

Here's the feed of that alert. pic.twitter.com/6FHmUyIRBx

The videos shot by the nanny cam of the cats show them to be entirely mesmerized.

But then, after a few moments, Maxwell freaks out and jumps over something invisible. pic.twitter.com/DIl1O34vPY

Here's the final video the camera recorded that night. pic.twitter.com/wZjZr9hgWA

Another incident involved a small cactus being shoved off of the shelf it was sitting on.

It's better to just watch the video, since the nannycam records everything now. pic.twitter.com/J7PpFviJmU

Ellis began investigating the apartment thoroughly. He found an odd crawl space in the hallway which led to an undiscovered crawl space, spanning his entire apartment between the roof and ceiling. Soon, he began seeing debris and dirt falling from it – a phenomenon that had never happened before.

It's REALLY high above the stairs, so I always figured it was impossible to access without some sort of fancy professional ladder. I took this video so you can see how high it is. pic.twitter.com/EROlY4OKVS

At one point, Ellis attempted poking the doorway by means of a long pole and a small and heavy object fell out. It was a child’s old leather shoe.