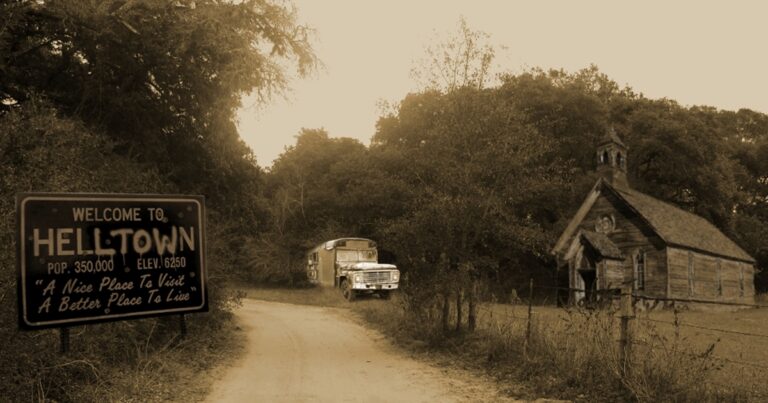 There are a few notable ingredients for a town to be considered creepy. Abandoned homes, toxic waste, ghosts, and a somewhat horrific backstory, to name just a few. However, Ohio’s “Hell Town” seems to have gone overboard by combining as many of these ingredients as possible.

Officially called Newville, the small village has gotten the name because of a rash of ghost sightings, alongside toxic chemicals, which have meant that the place is almost impossible to live in. Thankfully, the United States government forced the entire population out of the city during his presidency, using an executive order to place the area under the control of the National Parks Service.

This was initially to build a park. However, these plans never came to fruition, and the village has been abandoned ever since. Well, ‘abandoned’ might be a strong word, considering that visitors have routinely seen ghosts in different areas. Perhaps one of the most notable is one that haunts an abandoned bus near the center of Hell Town.

The paranormal activity seen in the village is also amplified by a church that was supposedly built by a group of Satanists before the residents were forcibly evicted. Alongside the sightings, some unbelievable reports suggest that mutants inhabit the area. This has been fuelled by reports that a group of Army Rangers became ill when passing the village in 1985.

Some of these mutant reports focus on the ‘Peninsula Python,’ a supposedly enormous snake that haunts the area. However, it’s worth noting that many of these have proven to be false, though that has stopped believers in reporting more sightings of these mutants, alongside other ghosts.

Regardless, Hell Town still takes the cake as one of the more apparently active paranormal sites in the United States. Whether or not the reports are true, the small Ohio village will still give people the creeps.