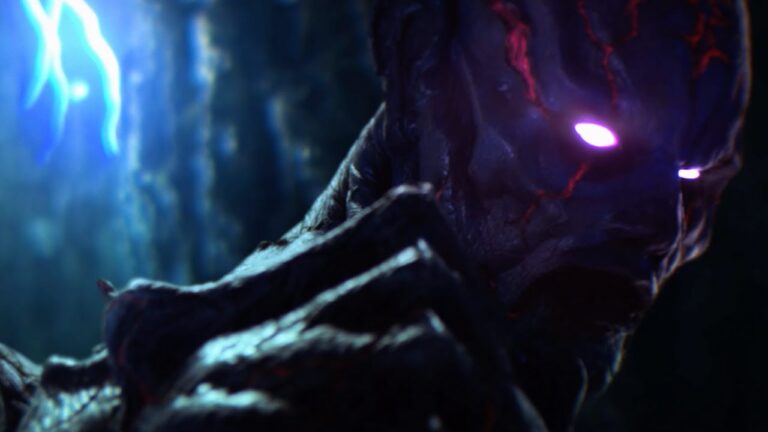 What would it be like to have your own monster?

That’s one of the questions that Director Steven Kostanski (The Void, The Divide, Father’s Day, The ABC’s of Death 2) credits to his motivation to create this visceral themed Sci-Fi/Horror hybrid. Harking to a time when horror films came with an almost inherent anticipation of gore-heavy scenes, Psycho Goreman is already making waves across message boards and through fandoms as a potential red-carnival of crimson corn syrup soaked insanity. This has many fans excited already at the prospect of returning to the days when redder was better was an industry standard in horror cinematography.

The plot here revolves around a time tested piece of storytelling. The titular Psycho Goreman, portrayed by Matt Ninaber, (Extraction Day, Transference, Last Run) is an ancient alien conqueror who is awoken on Earth by two archetypical adolescent siblings; brother and sister Mimi and Luke, portrayed by Nita-Josee Hanna (Books of Blood) and Owen Myre. (Alternate Ground, They Don’t Know) Toss in a mystical amulet as the plot device that dictates Psycho Goreman, who the kids nickname PG, must obey their every command – and suddenly you have comedic shades of Howie Mandel and Fred Savage from 1989’s Little Monsters mixing with the fast-paced all bets on the table themes of Arnold Schwarzenegger and Edward Furlong’s emotional survival codependency dynamic that brought us cheers and tears in Terminator 2: Judgement Day. And when PG’s long forgotten galactic enemies realize he’s a sitting duck, you better believe they’re coming to get their pound of alien flesh, creating an interstellar conflict that will unfold in a backdrop of modern suburbia.

But that’s where the jaunty family-friendly tropes make way the aforementioned blood and guts that have made this film the talk of horror FX junkies everywhere.

I enjoy subverting the safe space of the ‘kids movie’ genre with shocking violence and real world consequences.

Kostanski warns us that the only PG in this film is the alien in the title. The film is predicted to warrant a solid R-Rating – another throwback to the days when horror films were simply expected to be curated for restricted audiences. And if any director is right for the task, it’s Kostanski. His style can be observed in the visually shocking, no-holds-barred film The ABC’s of Death 2, in which Kostanski contributed the letter W to the alphabetical journey through creative depravity.

If all that isn’t enough to convince aficionados of the many converging genres found within Psycho Goreman – then this final piece of campy, schlocky goodness should do the trick. The film will debut this month at SXSW in Austin, TX on Friday the 13th.