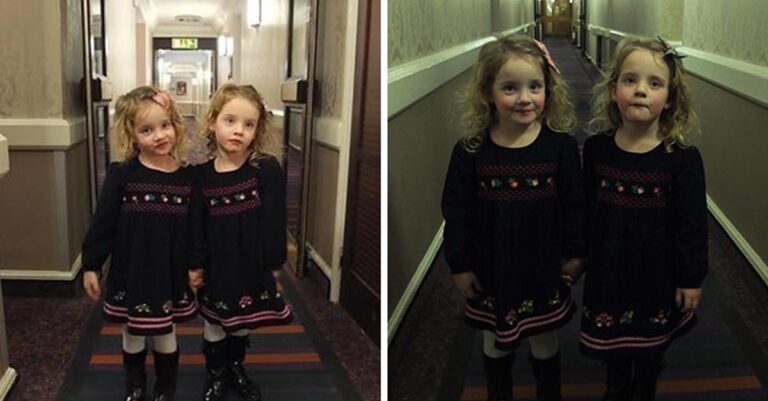 Poppy and Isabella are two twin daughters of an English dad with a creepy sense of humor. Adorable as they may be, that only lasts until their dad dresses them up to recreate the famous Grady twins from The Shining. Honestly, when in character, the twins are downright terrifying.

The father, Martin Hughes, is big on social media website Twitter (@wefail) and posts his adventures with his daughter via tweets. He is said to have taught his twin daughters to reenact the scene and they do so perfectly well. He even stated that he “jokingly taught them ‘come and play with us’ not long ago…”

The Famous Grady Twins from The Shining

His snap of the girls’ London haunt last week went viral on Twitter and he has confirmed that the prank has scared multiple hotel visitors. These 4-year old pranksters are undoubtedly going to get better with time.

Recreating the spooky Grady twins’ scene from The Shining

Looking at these snaps, who would not turn and dash in the other direction after encountering the twins? While on a family holiday, their dad managed to take some memorable and downright creepy shots of his daughters.

Unaware of whom they are reenacting, Poppy and Isabella, still do a spot-on impression

“As soon as we found out we were having identical twins I thought The Shining,” Hughes said.

Twitter users were shocked and delighted at the idea

‘Come and play with us’

When out of character, they are two regular adorable 4-year olds

Some people took the whole ordeal in an upsetting manner

Hughes shared that “Someone actually argued that demons are real and it’d legally be my fault if the girls were hurt when someone thought they were actual ghosts.”

Thankfully, the majority of people got the gist of the prank. By the looks of it, Halloween will be a lot of fun later down the line.