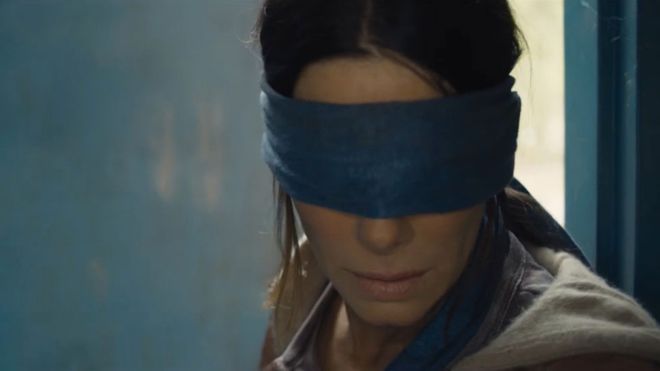 Netflix’s ‘Bird Box’ has certainly seen a tremendous bit of fame since its release.

The film, starring Sandra Bullock, takes place in a post-apocalyptic world, in which, if people look outside, they’re overcome with the mysterious urge to kill themselves. Thus, survivors of the initial fallout are forced to learn to live wondering the outside world using blindfolds.

This has inspired the unsafe (and flat-out stupid) challenge on social media, in which people attempt to go about their everyday lives blindfolded. Some very serious accidents have actually occurred during these challenge attempts. However, it looks like one restaurant is attempting to make the challenge a bit safer, putting their own spin on it.

Long Island, New York’s Milleridge Inn hosted a “Bird Box Challenge” in which they invited guests to enjoy dinner under the conditions of the ‘Bird Box’ film. Per a report from News 12:

“The Inn will transform into a post-apocalyptic scene, where humanity is being attacked by supernatural monsters.

“Patrons must remain silent and can’t remove the blindfolds until after dinner. The cost is $47.95 per person for the meal.”

The report notes that The Milleridge Inn isn’t the only restaurant offering this type of service. There are several others across the country doing the same thing. Would you be down to enjoy a meal while blindfolded in public?