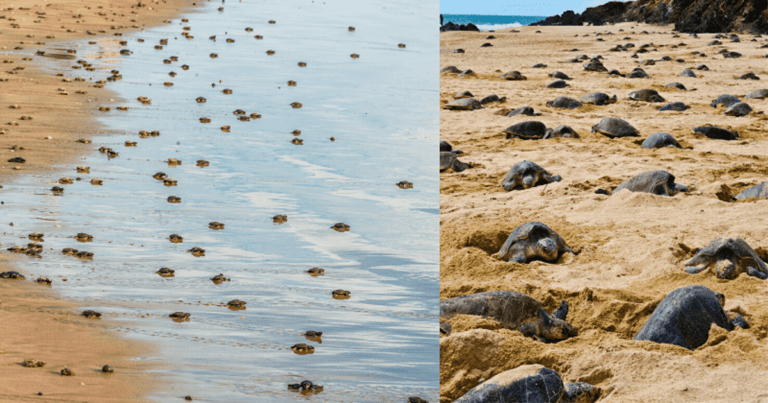 The Indian state of Odisha, which lies to the east of the country, has played host to hundreds of thousands of Olive Ridley sea turtles who have flocked to the Rushikulya rookery each year for decades, and the lockdown which has been put into effect across India has meant that these terrific testudines can go about their natural nesting habits in peace.

The Indian government announced a 21-day shutdown of everything apart from absolutely vital businesses across the country on the 24th March, which has meant that the majority of the 1.3 billion population is following self-confinement.

This lockdown and subsequent slowdown of human activity has meant that the yearly ritual of these turtles creating a nesting ground in the Rushikulya rookery can proceed without the interruption of tourists and locals alike.

Usually, the turtles are forced to nest at night so as to avoid unwanted interactions, but for the first time since 2013, they have been seen going about their business during the day. “Usually, they come on to the beach for nesting only during the night.” District Forest Officer Amlan Nayak explained, “This March was special for us as we saw the species visiting the site at night and even during the day, in equally good numbers”.

The Olive Ridley turtles, which are thought to be one of the most widespread turtle species, inhabit the Atlantic, Pacific and Indian oceans and the knock-on effect of COVID-19 can be seen in the species’ nesting habits across the world, including places like Brazil. Even though nearly a million female Olive Ridley turtles nest each year the species is considered to be vulnerable on the IUCN Red List and is seen as protected wildlife.

The absence of human intervention, as well as the closure of various turtle festivals across India, certainly means that the turtles will be left alone by people, but there is also the fear that without the thronging crowd’s attacks from pests and other animals will increase.

It is certainly a welcome sight though, to see animal groups protected or otherwise flourish in the shadow of COVID-19, such as these turtles returning in the light of day.