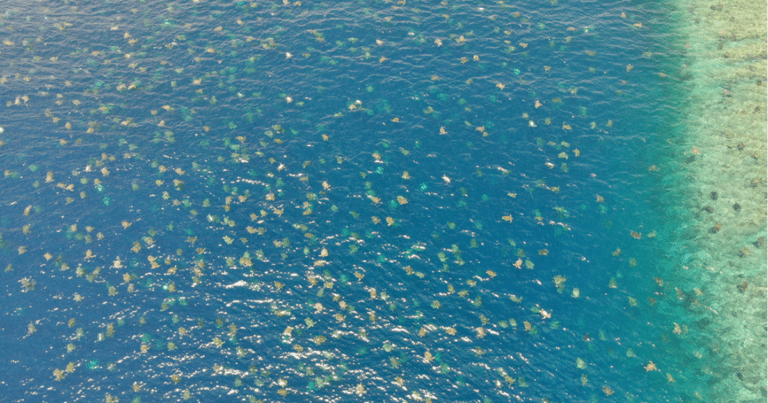 Green sea turtles are wondrous regardless of how you see them. Countless people visit them in aquariums around the world just to take in their beauty. In the real world, however, they can be much more amazing. This is especially true when it comes to colonies getting ready to nest.

While this is always a sight to see, it’s taken to a whole new level when you talk about the world’s largest colony of the creatures. Despite how amazing it looks, few people have ever gotten the chance to see it. The main reason for this is that people aren’t typically allowed near the colony during the period, as it runs the risk of interfering with it.

However, new technology has made it much easier to capture the nesting process, as recent drone footage highlights. Scientists in North Queensland, Australia, used a drone to capture footage of the green sea turtles as they make their way to their ancestral homes in the area. While this would be spectacular to look at in its own right, the kicker is that it’s the world’s largest colony of the creatures.

The turtles are seen making their way to Raine Island, which is something they do every year to nest for a short time. This gave the Australian scientists ample opportunity to plan for their arrival. As a result, they’ve gotten some amazing footage of the turtles on their way. While it’s unclear as to how many turtles are in the video, it’s definitely in the thousands.

This could mean that the video captures quite a large chunk of the world’s green sea turtle population. Despite the sheer number of turtles seen in the drone footage, the species are classified as endangered. However, with efforts still being made to bring them out of that status, it looks as though the population numbers could rebound in the next few years.