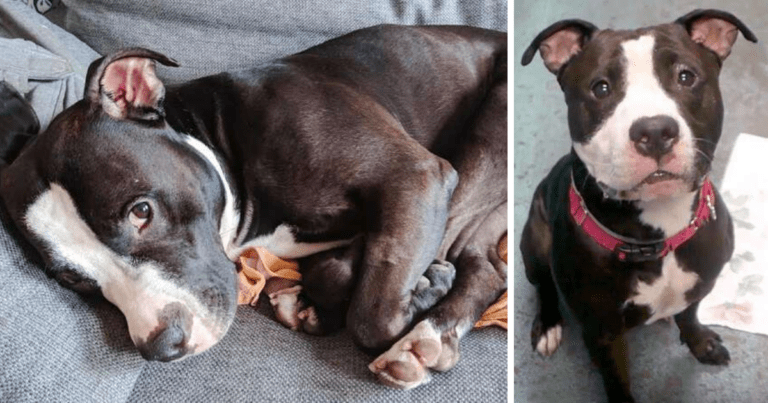 There are a lot of dogs that don’t get a lot of attention, especially in shelters. The pitbull breed is perhaps the most discriminated against in this regard.

However, that doesn’t mean that there aren’t some of the animals that don’t get the love that they desperately need and deserve. Smiley the pitbull is one such case.

Adopted by a woman named Olena Kayui earlier this year, the dog’s backstory is as depressing as many people might imagine. The dog, which was named Smiley because it’s constantly smiling and has a sunny disposition, was left in a shelter after her original family found out they were expecting a baby.

While this might be heart-breaking enough for many dog fans, this is the part where it gets a little darker. That’s because the shelter wasn’t a no-kill shelter, where animals are typically put down after a few months if they’re not adopted. This looked like it was over for Smiley the pitbull.

While things were starting to look grim for the lonely dog, the staff at the shelter weren’t giving up hope. Instead, they put up a desperate plea for help across the shelter’s social media platforms.

Ms. Kayui happened to notice this plea when scrolling through Facebook. Though she sees these kinds of posts come across her phone regularly, there was something different about Smiley.

Instead of scrolling past as she normally does, Ms. Kayui paid a little bit more attention to the post. While reading through it, she started to fall in love with the dog. It was there and then that she decided that she needed to adopt it.

Though Smiley the pitbull was a little uneasy after being fostered, perhaps because she was abandoned by her previous owners, things started to look better for her. After a few weeks, she was comfortable with Ms. Kayui and her family. Now, Smiley is back to being all smiles.

Smiley at his new home