Freaked DISCOVER THE ART OF PUBLISHING
Home Animals How Do Male Seahorses Give Birth? 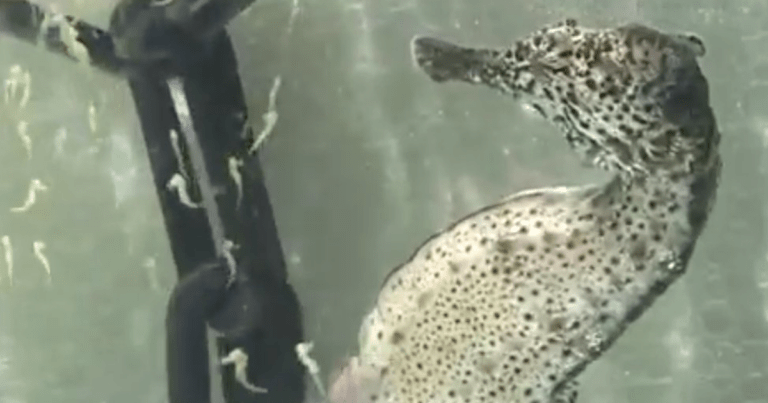 The animal kingdom is full of weird intricacies and anomalies that many people may not be aware of. One that most would have heard of, however, is that male seahorses give birth. This makes them one of the few male animals to do so. Despite this fact, there is still quite a range of questions about the process. Perhaps the most notable is ‘How do male seahorses give birth?’

While many people will be familiar with the act of mating, this is quite different for seahorses. Aside from the obvious, there are quite a few differences between the act of mating between them and other animals, especially humans. Naturally, the first thing that needs to be done is the mating itself.

The process can take several days, as a male and female will perform what could be termed a ritual and dance for several hours, if not days, to determine whether they’re the right fit for each other. If this has been done successfully, then the female will put her eggs into the pouch of the male seahorse, which is similar to a kangaroo pouch.

Following this, the male is able to seal the pouch to protect the egg before fertilizing them. This is somewhat similar to what happens in humans, although the roles are reversed. Once this is done, the mother’s job is done and she doesn’t need to do anything else. Similar to humans, what follows is waiting for the baby seahorses to grow.

However, this doesn’t answer the question as to how male seahorses give birth. Surprisingly, this is one of the less complicated aspects of the process. When the baby seahorses are ready, the male will open a hole in his pouch, and then violently jerk his body around to force the animals out. You can check out a video of the process below.

While this may seem unnatural to many people, there shouldn’t be any harm done to the baby seahorses, who should be ready to swim around once they’re out of the pouch.