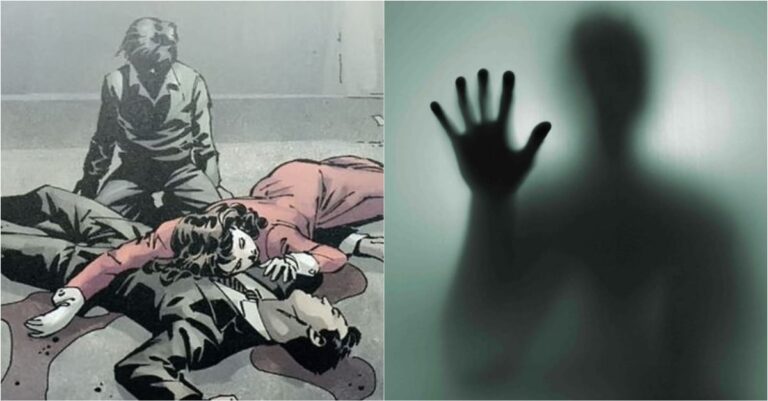 AskReddit is chockfull of creepy and spooky encounters. Today, we collected 25 of the spookiest facts from AskReddit. These are bound to send shivers down your spine and perhaps even rob you of your sleep.

Your eyes can still move after your death

“After a guillotine execution, there were records of optical sensors working anywhere from 15 to 30 seconds. That means the eyes still looked around.

Whether those are just twitches or there is still some synaptic activity I don’t know. It’s not like anyone has come back after a guillotine execution, but I find it that extremely disturbing.” — Jehovahs_attorney

There are millions of skeletons in the universe

“There are more skeletons than humans.” — InquisitorGrand

There are multiple serial killers inside of our country

“According to the FBI, there are between 35 to 50 active serial killers in the US at this time.” — SmashleePimpson

Most murders will go unsolved

“Most murders go unsolved. Killers walk among us. They look like us, talk like us, but sometimes they kill people, and no one has stopped them. They could be anyone: your friend, your neighbor, your family… and if you ever find out, it’s too late.” — omnisephiroth

“If you decide to commit suicide from the Golden Gate Bridge (please don’t), it would take a little over four seconds to finally impact the water. That seems like a lot of time to rethink if throwing yourself from the structure was the right decision or not.

Likewise, the impact is the same as falling 250ft onto concrete where you’re likely to break every bone in your body, including your skull. This usually causes immediate death, but in some cases, the person survives this (but body is broken and mangled) and either die a slower death of internal bleeding or die due to the freezing water.

There’s also only a 2% survival rate. But again, please don’t do it.” — _gilfoyle

There is an abandoned lighthouse that still turns on

“A long-abandoned lighthouse in Mom’s hometown has occasionally been spotted with lights on at night, even though all utilities were disconnected years ago and the entryway is locked.” — Back2Bach

Ghosts could be real

“The answer of a man even asked about whether ghosts are real or not ‘Once, at the Citadel, I came into an empty room and saw an empty chair. Yet I knew a woman had been there, only a moment before. The cushion was dented where she’d sat, the cloth was still warm, and her scent lingered in the air. If we leave our smells behind us when we leave a room, surely something of our souls must remain when we leave this life?’” — Connington17

You might have a brain aneurysm that hasn’t ruptured yet

“One in fifty of us is walking around with a brain aneurysm. It just hasn’t ruptured.” — rainbow_7

Prisoners were used for cruel experiments

“To determine the treatment of frostbite, prisoners were taken outside in freezing weather and left with exposed arms, periodically drenched with water until frozen solid. The arm was later amputated; the doctor would repeat the process on the victim’s upper arm to the shoulder. After both arms were gone, the doctors moved on to the legs until only a head and torso remained. The victim was then used for plague and pathogens experiments.” — BerniceSoliz

“That at any given moment when we look into space we are looking at the past. Light takes so long to travel that seeing a supernova or anything of the sorts happened many light years ago. There could be an explosion happening right now in the universe and we would never hear about it in our lifetime.” — stummydummy

“If you find a spider all scrunched up, it might just be dehydrated, and not dead.

They use their blood as hydraulic fluid to move their legs, which means they can’t walk when they’re dehydrated.” — fiberwire92

Most species are already extinct

“99% of all earth’s species that ever existed are currently extinct.” — LadyMadrox187

There is a gun that causes heart attacks

“As revealed in 1975 in a Congressional testimony, a type of gun was created by the CIA, which when shot darts, resulted in a heart attack. On penetrating the skin, the dart left just a tiny red dot. The poison worked rapidly and denatured quickly afterwards so that it was impossible to believe that the cause of the death was anything but unnatural.” — ItsPeachyKeen

Your death is inevitable

“One of the following three things will happen: 1) Someone will watch you die. 2) Someone will discover your dead body. 3) Your body will never be found.” — hydra1970

Yellowstone could explode at any moment

“Isn’t yellowstone a giant continent-killing super volcano that could explode at any moment?” — b8le

You could end up with an incurable disease

“At any moment a protein in your brain can just fold randomly and become a incurable horrifically debilitating fatal prion disease.

Examples include Kuru (random bouts of laughter, paralysis, and death less than a year after symptoms arise) and Fatal Familial Insomnia (slow but inevitable inability to sleep leading to hallucinations, weight loss, and eventually your body just gives up, P.S. sedation only hastens the disease.)

Also they can have an incubation period of decades so you might already have it anyway.” — rob_matt

Either we are alone or aliens exist

“Either we are completely alone in the universe or alien life exist, both scenarios are pretty scary to think about.” — loco404

“If you have no children, you are the last in an unbroken line to the first human.” — mockryan

Cockroaches are immune to poison

“Cockroaches. They can sense changes in air pressure, they know you’re coming before you open the door. They can fit through holes thick as a dime. They have white blood. Theres at least 5 roaches you don’t see for every roach you do see. They reproduce so quick they can evolve to gain immunities from poisons.” — ashtefer1

Your memories are unreliable

“Memories are subject to change. You can even convince yourself that a story you heard is an actual memory of yours. I just wish my life was based on something more solid than that.” — kaml_6

An octopus could theoretically climb through your body

“An octopus is flexible enough to enter your mouth, navigate your digestive system and leave through your anus.” — Maria_4

You can’t verify your own existence

“There is absolutely no way to verify anything with 100% certainty outside of your own existence. It’s just not possible.” — MelisandreStokes

“There is a day in every year which will eventually become your death date.” — MissPerfecta

Everyone in Tampa could die from anhydrous ammonia

“There is enough anhydrous ammonia in the port of Tampa to kill everyone in Tampa.” — mockryan

Most of the ocean is still unexplored

“The fact that the vast majority of oceans is still unexplored seems pretty spooky to me.” — frenchybop

Are you still planning on sleeping tonight? Guess not!