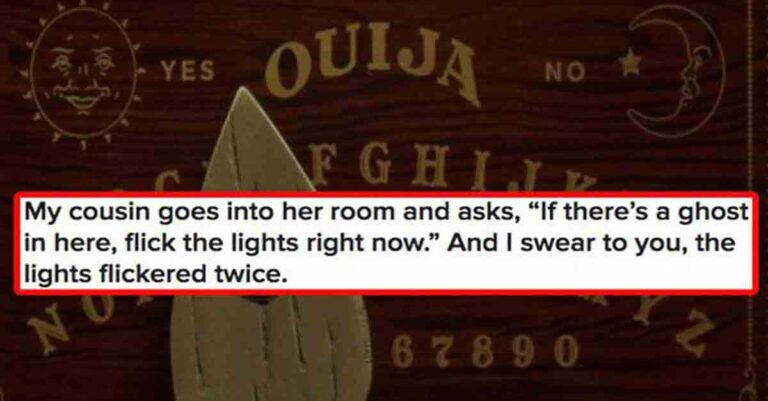 You might think twice before picking up that Ouija board next time.

Now, I know what you’re thinking. That Ouija board is just a game that scary movies have hyped up. I would normally agree with you. However after reading the following stories. I am having second thoughts. Maybe there is such a thing as a ghost after all?

Prepare to have your whole world view changed.

While babysitting, I was playing a with a board and when asked if anyone was there with us, it spelled out the name Zack. When the dad asked me how the night went, I told him what happened and he looked like he was going to be sick. He turned to me and said that they had a son Zachery that had passed away when he was four.

The chills that ran through me made me nearly pass out.

I went to a friend’s house and they were using a Ouija board. When we asked who was there, the planchette spelled out the initials of my mother, who had passed away about six months earlier.

Then the pointer kept going back and forth between the numbers 5 and 1 — my mother was 51 when she died.

I was at a sleepover and the board spelled out ‘go to bath.’ There was nobody in the bathroom at the time, so a couple of us walked over to the bathroom right by the door, and when we did, the lights flashed on and off a couple times, the shower curtain AND shower rod came flying off the wall and flew into the wall across from it.

22 years later, none of us have an explanation.

My mom tells a story about how she bought a board at a thrift shop once. It spooked her bad enough to try and get rid of it. She tossed it into the dumpster, went to work, and it ended up back on her bed by the time she arrived home.

It ended up back in her house every time she tried to get rid of it.

My sister and I met a spirit named Jack through our board. We asked him to send us a sign and the next thing I know, the lights in the next room started flickering. The next day I was looking for the board and it somehow ended up under my sister’s bed. Every time it was lost, it would always end up there.

Several years later, we ended up burning it.

One night, my friends and I were playing with a board in a notoriously haunted building at our college. Suddenly, my friend and I both felt like someone blew a heavy breath at the backs of our necks. The next morning, we found out the fire department was called shortly after we left because a fire had started in the exact same room we were playing in.

We did NOT have any candles burning or do anything that could have started a fire.

A few years ago I met the spirit of a woman in a haunted movie theater. After asking ‘what happened to you?’ one of my friends screamed and pointed at the mirror where a foggy imprint appeared.

In the legend surrounding the woman, the only evidence they could find of the guy who murdered her was a single bloody handprint on the glass mirror.

I used a makeshift Ouija board using a piece of paper and a quarter. The quarter was making figure eights, zigzagging around, which is the sign a demon is present. And, to make it worse, our fingers slid off the board but the quarter kept moving by itself.

We had the apartment saged soon thereafter.

I worked at an antique store and an old Ouija board would show up in various locations throughout the store. You’d lock up at night with the board in booth 17 on the first floor and open the next morning with it in booth 42 on the third floor.

It was a big relief when someone finally bought it.

When my friends and I played, we asked if anyone was with us and instantly, the candles in the room started to flicker and one of them went out. Then we heard footsteps down the hall coming in the direction of her room, which then stopped right in front of her door. She only had a cat that was not capable of making those sounds, so we packed up and left immediately.

That was 10 years ago and I’ve yet to mess with a Ouija board since.

#11 Grandpa from beyond the grave.

I was at a friend’s house one night and spoke to an older gentleman and things got intense quickly. After asking him a couple of questions, I started to cry uncontrollably. As I kept asking questions I came to find out I was speaking with my grandpa who had passed away a couple months earlier.

He told me that he was always watching over me and to tell my mom that he said ‘hello.’

I was playing with a board with some friends and when nothing happened, we gave up but we didn’t remember to say goodbye. Later that night, the light in my cousin’s room began flickering. We were talking about how the flickering of the light had been from a ghost.

So, as a joke, my cousin goes into her room and asks, ‘If there’s a ghost in here, flick the lights right now.’ I swear to you, the lights flickered twice. We grabbed the Oujia board, and asked the spirit to leave us alone. We did not forget to say goodbye this time.

My friends and I asked the board dumb questions, like who we were going to go to prom with, and then it started spelling ‘demon, get out.’ I asked everyone to take their hands off the planchette and it moved by itself, saying ‘demon get out’ over and over.

The weird thing is, the board spelled ‘demon’ like ‘deamon,’ so I’m not even sure how to correctly spell demon anymore.

I met a spirit through my board named John Depp, who told us he was from our hometown and had passed away sometime in the ’70s. We did a quick search after ending our session, and all of the information the he had told us was true. We were all amazed.

My ex-boyfriend however has refused to touch a Ouija board since.

I was 12 when I tried a board out and some seriously weird stuff has happened in that house after that day. Some of the activity includes the light in my old bedroom randomly turning off or on, the speakers on my old computer making a sound that I can only describe as a demon or alien trying to come through.

Then me waking up in the middle of the night from a dreamless sleep screaming my head off for no apparent reason.

Did you think any of these were real? Or was it all just made up? Comment on below and tell us about your own experience with the Ouija Board.