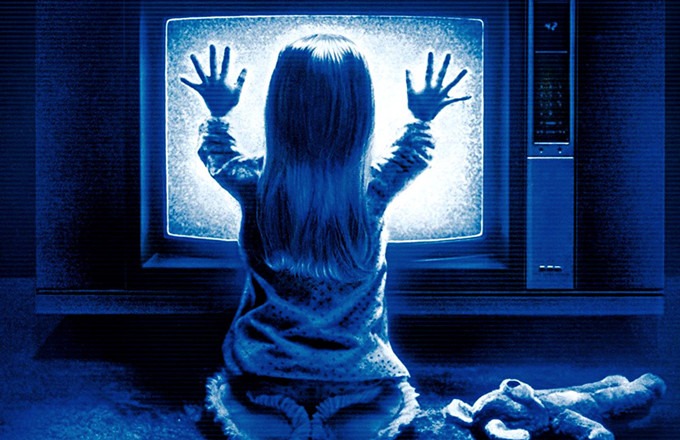 It’s the same every year.

You spend the weeks running up to Halloween giddily counting down the days like some demented version of Will Ferell’s character in Elf (deliberately misspelling ‘Santa’ and hoping Satan will come down the chimney instead).You annoy colleagues and friends alike with your ebullient enthusiasm for all things ghoulish, ghostly and grotesque and simply can not wait for the 31st.

You carve the pumpkins, prepare the costumes, buy the candy and hang the decorations, all in honour of the spookiest night of the year, a big part of your excitement for which, is the anticipation of some great horror movies to chill your spine and make your flesh creep.

But then, your actually faced with it. So much choice…

A cavalcade of creepy features, a multitude of monsters and a slew of slasher flicks that leave you utterly spoilt for choice. How the hell are you supposed to decide which classic to fire up for this most fitting of occasions?

Before you know it, you’ve spent an hour and a half flicking through your collection, skipping through Netflix and scouring the internet to find the perfect picture for your Halloween night, whilst everyone else has either left or grown bored at your dithering and decided to make themselves sick gorging on candy in protest.

‘If only there was another way’ I hear you cry.
Well guys and ghouls, you’ll be pleased to know that there is, because we’ve selected the ten most suitable screams  for samhein (pronounced Sah-Wain by the way, just so you don’t look a d*** in front of your mates) From all time classics and the truly terrifying to campy laughs and slasher flicks, we’ve got a selection box of terrible treats to give you nightmares ‘till next halloween. Let’s start our creepy countdown with numbers 10-7…

Later in the list I’ll be using phrases like ‘not for the faint hearted’ so it’s only fair that we start with some entries that are a bit more friendly to those of a nervous disposition, acknowledging that great horror tradition of building slowly toward a terrifying climax…

The fact that Steven Spielberg successfully argued for this movie to get a PG rating, thereby ensuring that whole generation of kids would never look at creepy trees, puppets or clowns in the same way ever again is stunning.

Don’t be fooled by the rating. Although stripped of the more adult oriented content that usually makes for a good horror, when you consider that Stephen King was originally asked to write the script for this, you get an insight into the film’s intention, from the start  Poltergeist was meant to be scary and is still effective in giving some bone fide chills.

Essentially a more ‘movie and effects friendly’ version of the old fashioned ‘haunted house’ narrative (not to mention a cheeky rehash of a very similar episode of The Twilight Zone), Poltergeist squeezes out its scare by ticking off  a list of set pieces built around common childhood fears. It is a slick, fast paced crowd pleaser that ticks all the right boxes for some spooky Halloween entertainment.

A guilty pleasure and another selection perfect for those with younger horror fans in the house, this 80’s nostalgia fest is like watching a mix of Stranger Things and the Goonies, set against the backdrop of a storyline in which a young boy accidentally opens a portal to hell in his back yard (see, this is the sort of wholesome creative stuff kids got up to before the invention of i-phones. Whatever happened to the days when rosy cheeked youngsters could spend a quiet afternoon conjuring demons? Good clean fun. Kids today, pah.).

The effects, which rely heavily on stop motion, latex and forced perspective are dated, but this only adds to the popcorn appeal of a film that isn’t meant to be taken too seriously. Though the minions in the film (no, not those minions) still retain a certain creepiness that holds up even now.

This is one is also family friendly. If you’re the Manson family that is.

I have to admit that the first time I saw this movie I went into the cinema ready to snickering eviscerate it for the amusement of myself and my friends.

I knew what to expect. From the title alone, you could already tell that this was going to be a lackluster gore fest built upon gross out effects and a breath thin script that could have been written by a monkey with a crayon. I settled into my seat with the stated intention of mocking this one mercilessly. To say I was pleasantly surprised would be an understatement.

Whilst the promised gore is still there, the splatter moments are woven together by a clever, well thought out premise that keeps the viewer intrigued and teases out the plot in well paced increments.  The film’s inclusion of less visceral horror imagery, for example the creepy doll and pig mask, elevates it above the usual run of the mill blood and guts offering into something more worthwhile. For those who have never seen it and have somehow managed to avoid years worth of spoilers, the film’s eventual twist is also a treat. Just maybe avoid sharing that treat with the kids…

Well, it had to be here didn’t it? John Carpenter’s classic laid the bloody blueprint for a slew of slasher flicks to come, with even the jagged, puncturing strains of its soundtrack making a generation of horror fans feel uncomfortable.

The tale of Micheal Myers stalking babysitters runs like an obstacle course of horror cliches, primarily because it invented a lot of them and whilst I would always condone the responsible consumption of alcohol at any time of year, it does lend itself well to a drinking game or two.

Jamie Lee Curtis turns in a great performance as the archetypal plucky heroine, fighting for survival against the seemingly indestructible Micheal (whose mask, interestingly enough, was actually a painted William Shatner mask, which must be an unsettling fact for Shatner himself to consider when he looks in the mirror every morning).

With more jumps than a frog in a trampoline factory and enough heart racing scares to make it practically count as a cardio workout, Halloween remains a stellar choice for October 31st.

And there you have it, entries 10-7 on our list of treats to avoid the tricks. Keep an eye out for the next installment of our countdown and in the meantime don’t forget to eat, drink and be scary. Happy Halloween folks!