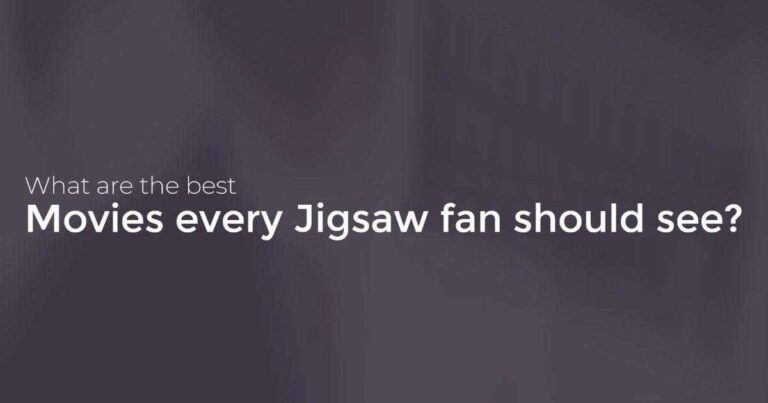 If you were a fan of Saw, no doubt you’ll be a fan of these.

Even though there are like seven— eight? Wait they made another? What do you mean there’s a ninth one coming out? Goddamn.

Even though there is a crap tonne of Saw movies, odds are, you haven’t had a complete fix yet, and want more. I don’t blame you, sometimes when you find a good movie, you want to watch it, all variations of it, and everything to do with it. So if you’ve run out of suggestions, here are some movies like Saw.

“I saw the devil isn’t particularly something a jigsaw fan would be super hyped to see, but it’s definitely something that they would be able to enjoy. It’s more plot than a saw movie in the sense of an actual reason.”

“I’m not sure Dead Silence would be considered relevant for a jigsaw fan, but if you are a fan of the “Saw” series of movies, it might be up your alley. Plenty of chills and thrills to keep you on the edge of your seat wondering what will happen next. If that’s your genre, it would be perfect.”

Its about six strangers who wake up in a strange room that is cube-shaped and that seems a part of an intricate maze of unknown dimensions. They must find the way out helping each other and be having to take horrible decisions to survive or be killed.

“Interesting movie comparing it to the Jigsaw series it is a must watch. I believe the plot is a secure watch for zombie lovers.”

“It took me to Amazon and showed the original and sequal with clear descriptions of the movies.Underneath it all offered other movies that starred Vincent Price. Lists prices and customer reviews without too much clutter.”

#6 A Nightmare on Elm Street

“This movie is definitely one of the scariest i have ever seen, i recommend watching it with friends near you :)”

“I was skeptical that I would like this when I went to see it, but it really drew me in at a few parts. I went to a late night viewing with a few friends and I was surprised at how much I liked it. The opening scene really set the table, and the move really picks up the pace around the 25 minute mark. There are a few jump scares of course, but that is to be expected. If you enjoyed the SAW series than you won’t be disappointed. So suspenseful!”

“As a big time member of the Jigsaw fan club, I always am looking for new movies to watch that not only keep my interest but that I can also tell all my fellow Jigsaw fan club members about. This movie Se7en really meets my needs. The way the 7 deadly sins are portrayed by these great Hollywood actors would have any Jigsaw fan yearning for more!”

“An absolute classic movie. Any horror fan who hasn’t seen it needs to watch it right away. Jigsaw is nothing compared to this. This is one of the original slasher films and is deserving of anybody’s time.”

“Child’s play is a terrifying movie, in a good way. Watch as these dolls come to life and scare you to pieces!”

“Are you just entering into the world of horror movies? While today’s movies push the gore factor to the limit, I highly recommend you check out the classics that brought about this genre. Psycho is one that still gives you the chills. You can’t call yourself a real horror movie fan without seeing it!”

“This movie is the BEST Halloween (and the only Halloween in my book). Everything is top notch for thrills and as both a scary movie lover and a Jigsaw devotee, you will love this movie. There isn’t the violence that are in most SAW movies but the suspense and scary parts are there. Michael Myers is terrifying! I most definitely recommend ANY horror fanatic see this, including Jigsaw fans.”

“I would agree that people who like saw or creepy weird horror will defiantly enjoy house of 1000 corpses. I rented this movie and i think that if Jigsaw himself saw this movie he would be impressed.”

“I absolutely loved this movie and it really is a must watch for any Jigsaw fan! It starts off a little slow but as soon as it grabs your attention, it doesn’t let go throughout the rest of the movie. I found that it keeps you on the edge of your seat and leaves you wanting more. If you want to know more about the movie, amazon has a great page that can give you a really nice synopsis of the movie and tells you everything that you need to know.”

#15 The Silence of the Lambs

“I do not this that The Silence of the Lambs is comparable to Jigsaw. I did not enjoy watching this movie at all. The only positive is that it was made well.”

“Everyone is raving about Jigsaw, and I went to see it too. I enjoyed it as much as I did the other Saw films, but I think at this point for me movies like Jigsaw are just capitalizing off the Saw franchise. Now a classic horror film that has all the makings of puzzles, mysteries, and scares, done right is the original Scream directed by the late and great Wes Craven. Scream is a movie that every horror fan should have seen by now, if not, you’re just not doing it right! Scream is one of the first meta referential slashers out there and it did it so cleverly. I have Scream in my top 10 horror films of all time and I’d highly suggest fans of the Jigsaw movie to give it a watch.”