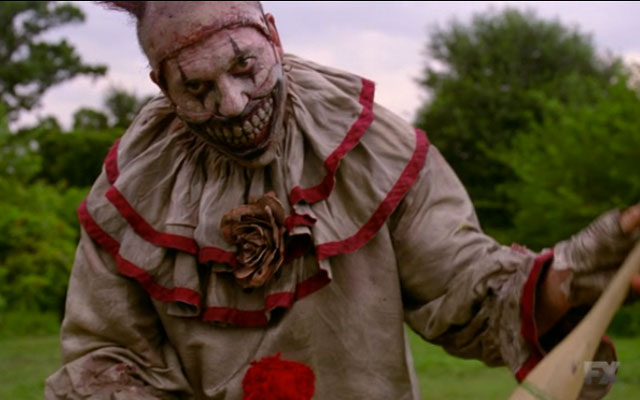 Clowns are creepy. It’s a common phrase, a generally accepted truth based upon a common fear that has been played upon by countless horror writers and directors over the years. The evil clown trope runs the gamut from the terrifying Pennywise in Stephen King’s IT to the melted waxwork nonsense of Killer Klowns from Outer Space, but all share a single universal truth: old or new, supernatural or simply malevolent, clowns are creepy- period.

But have you ever stopped to think how these features, showing the face painted frighteners to be terrifying and sinister, impact upon the livelihoods of REAL clowns? The guys who make a living in kid’s entertainment or in circuses?

No? Me neither. But, perhaps we should, because as it turns out, clowns are pissed.

Recently the group Clowns of America International bemoaned the villainization of clowns in the media, voicing opposition to the character ‘Twisty’ in the series  American Horror Story making it clear that they do not support any media that increases the public’s coulrophobia. The maniacal clown has become a poster image for the series and ‘real’ clowns clearly feel that their reputation is being somehow besmirched.

This is not the first time that the clown community has gotten its oversized pants in a twist over the negative effects of horror on the trade. A similar complaint was also raised by professional clowns upon the release of the IT:Chapter One movie, with clowns feeling that the demonic clown painted them in a bad light.

However, with the clown being such an iconic staple of the horror genre it seems highly unlikely that their protests will stop writers and filmmakers using them. In fact the idea of clowns becoming so angry about their depiction in horror that they eventually decide to live up to the stereotype would be a great idea for a horror movie.

I guess it’s a good job their smiles are painted on.