Freaked DISCOVER THE ART OF PUBLISHING
Home Books Read About The Icelandic Christmas Story That Was So Creepy, The Government Censored It 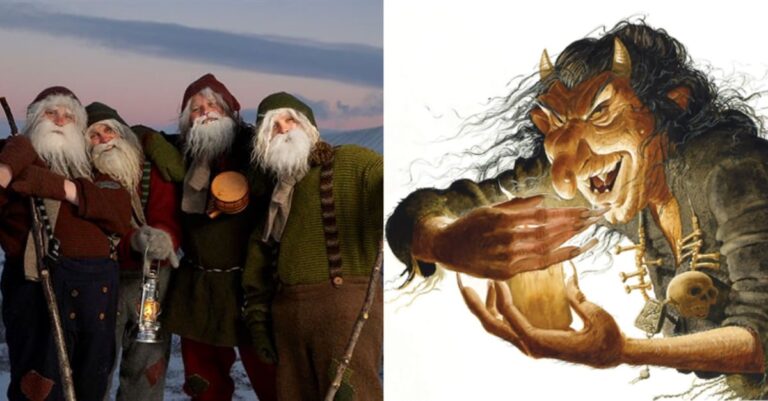 Iceland’s folklore is the opposite of warm and fuzzy – the type of tales we grew up with. Out of the countless creepy and downright horrifying stories that the place is notorious for, the Yule Lads stand out prominently. The Yule Lads had a demonic Yule Cat that they took along with their mother Gryla on their prowling sessions come Christmas. Children that were unlucky enough to be caught by them were cooked alive and then consumed.

In the 13 days leading up to Christmas, the Yule Lads visited children at night. Malevolent in intentions, the 13 different Yule Lads performed wicked tasks based on each of their unique personalities. Stufur, Giljaguar, and Stekkjarstaur were notorious for stealing farm animals and milk. Kertasníkir stole children’s lanterns and candles, leaving them stranded in the dark.Leftover food in pots was licked up by Askasleikir, Bjúgnakrækir stole sausages, and Ketkrókur used his hook to steal meat. Hurðaskellir scared sleeping children by slamming doors at night.

The Yule Lads Were The Spawn Of Horrific Monsters

Monsters, Gryla and Leppalúði, were said to be the parents of the Yule Lads. Out of the two monsters, their mother Gryla was awfully menacing. The legendary Grýla had hooves for feet and thirteen tails. Being the troll that she is, she spent her days living in the mountains only occasionally coming down to hunt for children.

Once she caught any children, she would drag them in a sack to her dwelling in the hills. She would then boil them alive and eat them.

The Yule Lads Had A Demonic Pet Cat

The Yule Lads’ pet cat is even scarier than their parents. Unlike the parents, the cat attacked every child regardless of good or evil behavior. According to legend, children gifted with new clothes were immune from the cat. This is how the tradition of gifting sweaters came about.

The Yule Lads Had A Variety Of Origin Stories

The origins of the Yule Lads vary, but no version is exactly pleasant. Some stories say that they dwelt beside us even though they were from another dimension. The Lads were invisible all year round until the holidays. Other stories state that the boys Eve’s children that she hid from God. Once God discovered them, they were banished to another world. Other sources state that the Yule Lads were fallen angels.

The Yule Lads Were Physically Terrifying

The Yule Lads were frighteningly ugly and were always depicted hag-like in drawings. Some of them sported unique physical features to aid them in mischief such as having an abnormally large nose to sniff out food and being incredibly thin to slip through cracks in homes and steal food.

The Yule Lads Were Researched By Elves

In Iceland there is an elf school where scholars study the mythology and history of elfin creatures and the Yule Lads. About 54% of Icelanders believe in elves and claim to have interacted elfin being.

At First, There Were 82 Yule Lads

Before being penned down, tales of the Yule Lads spread by word-of-mouth. Each story was different, and at one point there were 82 different Yule Lads. However, in 1932, a poet called Jóhannes úr Kötlum wrote down a poem in which he only described 13 of them. Over time, the poem became the accepted version, and the number 13 stuck.

In Iceland’s rugged and difficult territory, it was important to raise children of resilience and bravery. Tales of the Yule Lads helped cement these qualities in the children of the townsfolk.

The Story Of The Yule Lads Was Eventually Outright Banned

Given how terrifying the Yule Lads’ tales were, in 1746 it was officially banned for parents to tell their kids about them.

Over the years, the Yule Lads’ tales have morphed to become far more accommodating for children’s fairytales. The Yule Lads’ deeds of mischief were toned down. Instead of being robbers, they are now spoken of for politely requesting food and milk. The stories were changed to make them more child-friendly.The original stories, if you were ever unlucky to stumble upon them, are grisly, gory and downright creepy. Once you read about them, you will forget about any fears you had of Santa Claus.