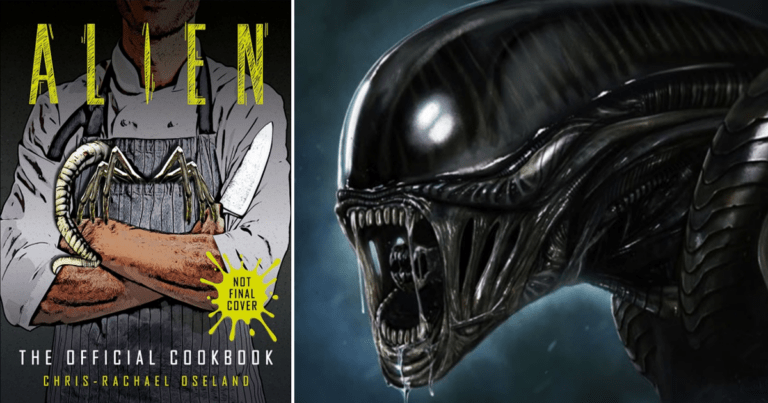 Two things that I never thought would go hand in hand are the culinary arts and a race of bloodthirsty face-hugging super aliens, but food writer Chris-Rachael Oseland is looking to combine the two in his upcoming book based on the Alien movie franchise which reportedly will contain over fifty recipes!

The Alien movies have spawned an incredible amount of merchandise, including boardgames, videogames and action figures but the academy award winning franchise has never made a successful official foray into the culinary world until now.

There have however been many successful cookbooks based on hit tv shows and movies throughout the years, including some titles that you might not think of as entirely appetising.

From The Walking Dead Cookbook and Survival Guide to recipes provided by the Teenage Mutant Ninja Turtles, tie-ins to everybody’s favorite franchises help people enjoy getting back into the kitchen.

And now according to the folks over at Bloody Disgusting, Alien: The Official Cookbook will supposedly take you on “A culinary journey through the Xenomorph’s terrifying life cycle”. Some of the featured recipes are set to include ‘Avocado Xenomorph Eggs’ and ‘Chicken Facehugger Cordon Bleu.

Oseland and Titan Books are partnering up and working towards a release date of November 10th 2020 so you can pick it up just in time for Christmas, and maybe you can find something in there to replace the seasonal turkey!

The book will be released as a full-colour hardback and prices are reported to be $34.95/£24.99. If you require more to whet your appetite then check out the early cover art (which is yet to be finalised) featured below!

Would you let a facehugger into your kitchen, or is this maybe a step too far in the world of merchandising? Let us know what you think or if you’ve ever attempted to make anything Alien themed in the comments below.