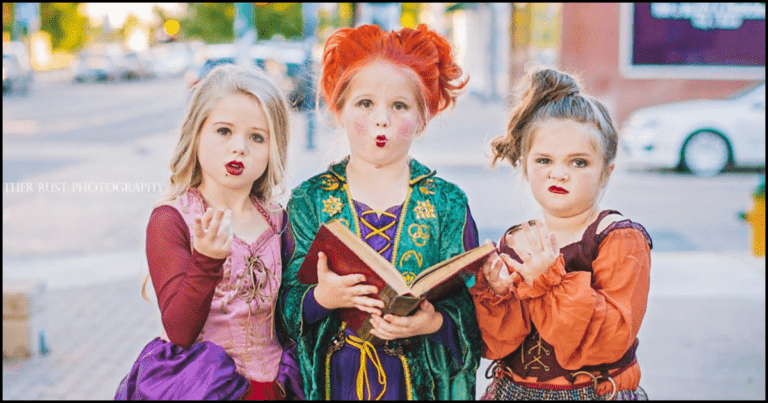 If you can’t tell by now, Halloween is our favorite time of the year. It’s an event where everybody can dress up as their most beloved fictional characters, be as strange as they want, and not be judged (who cares what anybody thinks anyway, right?!).

Amazingly, these three young sisters have brilliantly captured the Halloween spirit with their unbelievably spooky, yet incredibly heart-warming cosplay of the Sanderson sisters from Disney’s Hocus Pocus.

The sisters from Texas – eight-year-old twins Maddi and Alli Grabenstein, and their six-year-old little sister, Landri Grabenstein – sported their best Hocus Pocus costumes and posed for a fun Halloween photoshoot.

As you can see above, the three sisters superbly executed the look, and this could well be the best Sanderson sisters cosplay ever, despite the countless attempts at it before this one.

While it was the sisters who absolutely smashed the Hocus Pocus look, credit must also go to their mother, Heather, for their adorably villainous look.

Landri, the youngest of the three sisters, represented Mary, and she did a wonderful job at it. Aside from her excellent purple dress with orange sleeves, the look of disgust perfectly matches Kathy Najimy’s character from the movie.

Alli’s portrayal of Sarah – played by Sarah Jessica Parker in the film – was done brilliantly. The young girl’s wicked posture, alongside her colorful dress, made for a great representation of the witch.

Finally, Maddi sported bright ginger hair in attempts to play Bette Midler’s Winifred, and the was wonderfully accomplished. Her dress, bright red lipstick, and very own book of spells completed her witch-like look.

The 1993 comedy, Hocus Pocus, was the sister’s sole inspiration, and their love for the movie can be seen in their fantastic portrayal of the three witches.

What do you think of the costumes? Are these the best Sanderson sisters you’ve ever seen? Be sure to let us know your thoughts and opinions in the comments below.