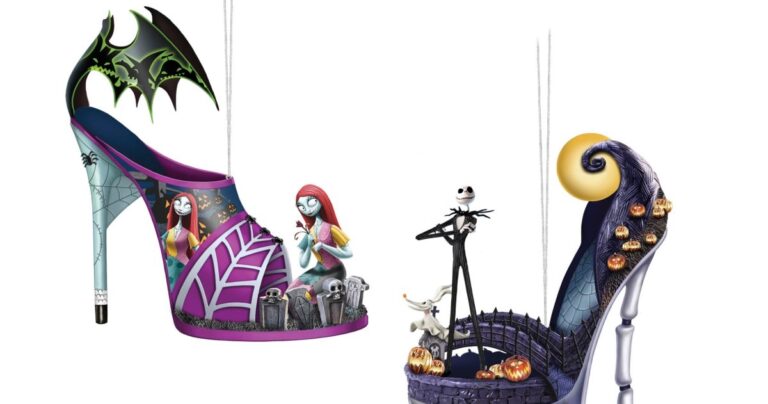 High-quality Nightmare Before Christmas ornaments tend to be quite difficult to find. While there are dozens that look amazing, many of these tend to be poorly made or don’t match up with expectations once they’re delivered. However, there are a few that stand well above the rest, with these officially-licensed ornaments from Bradfords looking and feeling the part.

Styled to look like a shoe, the hand-made ornaments feature everything that Tim Burton fans love about the movie. While they come in sets of two, both look drastically different, with Jack Skellington being front-and-center on one, and his better-half, Sally, leading the other. Alongside this, there is a range of jack-o-lanterns, spider webs, and gravestones littering both.

The paint style also alludes to some of the film’s more memorable scenes. Standing at over three inches tall, they’re big enough to get all of the details right without taking up too much space. This should be enough to please anybody looking for some great Nightmare Before Christmas ornaments.

There are a few sets available, so you’ll be able to choose which shoes are your favorite before buying. The first set showcases Jack and Sally, alongside Zero, the loyal skele-dog. Set two, on the other hand, doesn’t focus on any characters in particular, though it does show off a wide range of the cast.

Being officially-licensed by Tim Burton and Disney, buyers will also be provided with a certificate of authenticity upon delivery. With how the shoes are designed, you’ll be able to use them in several ways, such as hanging them from a Christmas tree or simply putting them front-and-center on a shelf.

The Nightmare Before Christmas ornaments are available from The Bradford Exchange from £39.99, plus shipping cost. Alongside the certificate of authenticity, buyers will also get a one-year money-back guarantee if they don’t like the purchase.