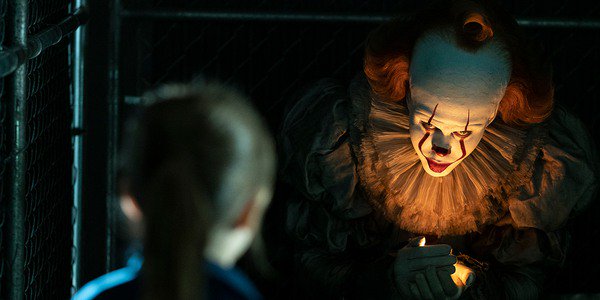 Greetings friends and fiends and welcome to our second instalment of ‘The Ten Best Horror Movies for Halloween’ helping you avoid the horrors of indecision and suggesting the top titles in terror for your Halloween viewing. If you haven’t checked out entries 10-7, shame on you. Go back and do it now. I’ll wait…

All caught up? Great. Today’s entries include fur, Freddy and freaky clowns and reveals numbers 6-4 on our creepy countdown. Starting with…

With the release of  Jaquin Phoenix’s Joker and the second installment of  IT being so close to All Hallows Eve, this year’s Halloween is  likely to feature the largest number of clowns gathered in one place since the last sitting of parliament ( yes, I’m British. Bite me). It would therefore be somewhat remiss of us not to include this modern classic in our list.

The tale of the Loser’s Club’s battle against a shape shifting entity that can become what they fear most, is one of Stephen King’s best, and did for clowns what the Leaving Neverland documentary did for sales Micheal Jackson action figures, to the extent that professional clowns complained about the impact it was having on their livlihoods (No, really).

Whilst some of us will always be haunted by the version of Pennywise portrayed by Tim Curry in the TV mini series (and the further disturbing fact that Curry looks just as delightfully sinister without the make up. Damn) Skargard’s portrayal of the dribbling demonic clown, coupled with the leaps and bounds taken in the realm of special effects means that this newer incarnation has all right ingredients to disturb and disquiet.

Unfortunately, with the film having only just finished in theatres, one can only dream. Such things being far beyond the realms of what is possible for an upstanding, law abiding citizen like myself.Although…

…if you are the kind of unscrupulous individual able, by some nefarious searching on the inter-web, to lay your hands on the already available HD copy of Chapter Two, well then, it would be rude not to watch them both wouldn’t it? Grab some popcorn and settle in, the film’s length is well worth it.

5. A Nightmare on Elm Street

When you actually consider the premise of Nightmare on Elm Street, (a child molester, murdered by a lynch mob of local parents comes back to haunt teenagers in their dreams with a glove made of razor blades). It’s difficult to imagine how anyone had the gall to pitch it in a meeting at all, let alone green light it to be made.

Luckily, for fans of supernatural slasher horror, someone did, allowing Wes Craven and Robert Englund to create an iconic horror monster for the ages in Freddy Kruger. Though there have been attempts to update and remake this classic, there is something more potently menacing about the original that means I’d happily recommend it those over later efforts.

Influential, iconic and still entertaining to this day, this is perfect Halloween viewing. Look out for a young Johnny Depp popping up in this one, but make sure you don’t fall asleep in front of the TV, or you know what will happen…

4. An American Werewolf in London

What’s halloween without a decent werewolf flick?  The story of American backpackers who stumble across a dark secret whilst touring the moors of Northern England, John Landis’ classic lupine adventure, skirts the line between horror and comedy with great success and features some genuinely hair raising moments.

The creature’s bestial ‘howl’ alone  (achieved by mixing the sounds of wolves, lions and pigs into something new and more gutterally resonant) is enough to give most viewers chills, not to mention the stunning old school special effects, including probably the best werewolf transformation in movie history.

This is another film in which sound is employed brilliantly to unsettle the viewer, with the same loud/quiet balance exploited to full effect and the tendon snapping and bone popping action deliberately juxtaposed with an incongruously upbeat soundtrack. Great entertainment.

Keep an eye out for the final three in our dastardly delineation of demonic delights and remember, it’s almost Halloween – eat, drink and be scary!