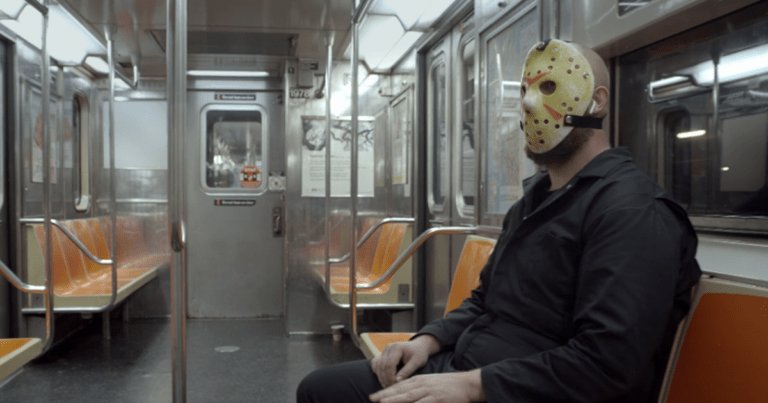 Jason Voorhees’ time in Manhattan was a confusing one. Oddly enough, Jason Takes Manhattan is perhaps the least successful installment in the Friday the 13th franchise. However, it looks as though the iconic horror character is returning to the city. Surprisingly, it’s for a much different reason than many people might have thought.

Instead of looking for potential victims, Voorhees is trying to save lives. In a new public service announcement, the character is encouraging New Yorkers to wear masks to prevent the transmission of the COVID-19 virus. Given that his mask is one of the more iconic things in the horror genre, there are few characters that are more fitting for the PSA.

Rather than taking a horror approach to the PSA, it goes in a very different direction. In it, which you can see below, there’s a somewhat more tongue-in-cheek approach, similar to the wink and nudge that was seen in Freddy Vs. Jason. Throughout the clip, Jason Voorhees is seen wandering the subways and streets of New York.

Perhaps the most tongue-in-cheek aspect of this is that the character is seen as a cat-lover. His apparent pet takes up a decent amount of screen time, which should help the PSA appeal to other cat lovers. However, it’s unclear as to whether the cat is being groomed to become a knife-wielding murderer.

Being as iconic as he is, however, his past catches up with him and people flee in terror. In an attempt to change things, he puts on a PPE mask, designed to minimize the chance of catching COVID-19. In a somewhat cruel twist, though, this doesn’t change his luck, and people still run from the – apparently unarmed and friendly – serial killer.

At least Jason Voorhees is being safe and not passing anything on. That is, until he strikes again.