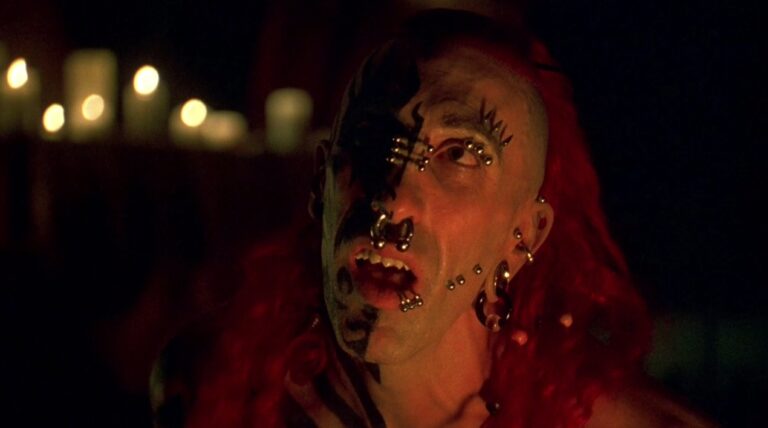 The 1998 release of Strangeland was directed by John Pieplow and written by Dee Snider, the frontman of Twisted Sister. Strangeland was centered around a sadistic individual who went by the name of Captain Howdy, who would lure teens to his house in order to kidnap and defile them. The film focuses hugely on the themes of body modification and the subcultures that surround it.

Even though the film currently holds a 6% score on Rotten Tomatoes, Strangeland has also amassed a dedicated cult following, which in part has allowed the film to hold onto a much healthier score of 63% from audiences. Here are a few of the reasons we think the movie has such an ardent fanbase.

1 . Dee Snider Did More Than Just Write It

Twisted Sister rockstar Dee Snider is credited with writing the film, but he also acted out the role of Captain Howdy/Carleton Hendricks. As well as this Snider produced the title and put in a lot of effort behind the camera. Snider is a big part of the reason that the film did not shy away from controversial topics, as even back in his metal days, he was appearing in front of Congress to defend his music. The plot of Strangeland is based on the Twisted Sister song Horror-Teria, which chronicles the tale of Captain Howdy.

2 . The Soundtrack Is Amazing

With Snider behind the scenes, you can definitely picture what the sound of the film is going to be before the opening credits begin to roll. Strangeland features tracks from powerhouses such as Marilyn Manson, Pantera, Megadeath, System Of A Down and Anthrax.

3 . It Was Incredibly Ahead Of Its Time

Before the hugely popular Saw and Hostel franchises, Strangeland was deep-diving into themes of entrapment and helpless bondage. Some even go so far as to compare the characters of Captain Howdy and Jigsaw in the way that they excuse their evil crimes by saying it is for the betterment of their captives. As well as this Strangeland exemplified the need for internet safety in the years in which the internet was still growing and focused around chatrooms.

4 . It Starred Some Familiar Faces

As well as a brief role played by Freddy Kreuger star Robert Englund himself, we also get to see the early acting chops of both Amy Smart and Linda Cardellini, both of whom went on to gain major Hollywood roles.